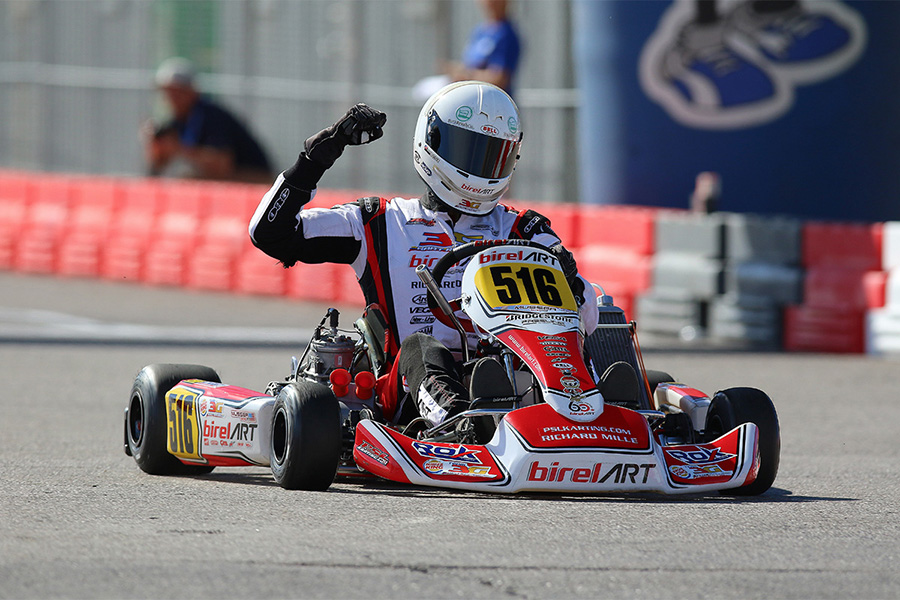 “The ROK the RIO event was definitely one of our highlights of the 2018 racing season,” explained PSL Karting’s Dominic Labrecque. “It was great to have a lot of our dealers at the same event competing towards one common goal. Our products and drivers proved to once again be at the top of their game and we look forward to our next event.”

Ryan MacDermid, competing under the Prime Power Team banner, had a perfect weekend by scoring the ROK Senior pole position, all four heat race wins, and main event victory. Putting his BirelART chassis on top, MacDermid scored the victory on a last lap pass only three corners from the checkered flag. PSL Karting/BirelART North America’s Ryan Norberg had a great comeback after a heat race DNF to finish fifth in the main event while Phil Giebler Racing drivers Phil Giebler and Jake Drew put four BirelArt products in the top-ten scoring seventh and ninth place results with their Ricciardo chassis.

The second victory on the weekend came at the hands of 3G Racing / PSL Karting pilot Jordan Musser in the Shifter ROK Master division. Piloting a BirelART chassis, Musser took the victory just ahead of Phil Giebler Racing and Ricciardo Kart driver Ryan Kinnear providing a one-two finish for the brand.

Thomas Nepveu looked to be in contention for the ROK Junior victory as his speed was present throughout the race weekend. Leading in the main event, Nepveu was biding his time before being pushed into the barriers by an overanxious competitor. Losing momentum and position in the altercation, the young PSL Karting/BirelART North America driver rebounded to claim a top-five finish in fifth. Prime Power Team’s Mackenzie Clark also showed great pace throughout the weekend, but a first corner incident forced him to come from deep in the field, salvaging a tenth place finish.

Cooper Becklin added another podium result for the BirelART brand as he added a second place finish in the KA100 Senior class. Competing in his first ever Senior event, Becklin took the weekend in stride and found his way to the front of the field. MDG Karting’s Eric Slivkoff put two BirelART products near the front as he joined Becklin in the top-five with a fourth place finish.

“Our dealers have really stepped up to the plate, as evidenced by our strong showing at the ROK the RIO,” continues Labrecque. “The effort and teamwork put in by all involved really brings a sense of camaraderie, and I am so proud of everyone in the BirelART North America family.”

BirelART North America and their large contingent of dealers and drivers will return to Las Vegas next weekend for the annual Superkarts! USA SuperNationals. Stay tuned for a complete event preview early next week.

For more information on the PSL Karting/ BirelART North America Race Team,  and how to join them for your 2019 racing program, please contact Dominic@PSLKarting.com.