The Challenge Is On in WSK Final Cup 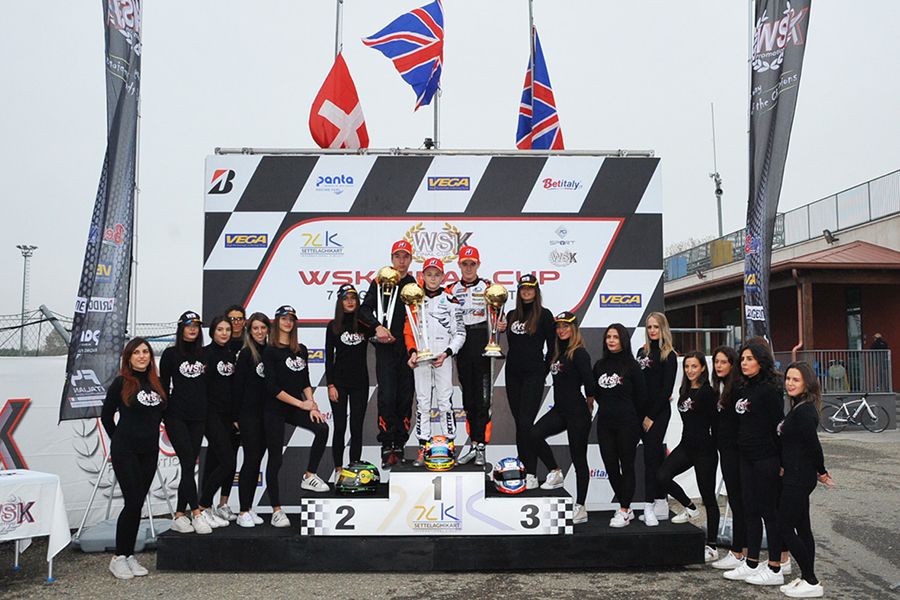 The outcome of the races held today at the Settelaghi Kart in Castelletto di Branduzzo did not narrow down the list of possible winners of WSK Final Cup, despite this being the second of the three races in the calendar. Several surprising drivers crossed the chequered flag of the Finals as first in the four categories, which changed the values shown in the previous round. In two weeks time, the Adria Karting Raceway in Adria (RO) will stage a red-hot, decisive, closer for this WSK Series.

The Italian Lorenzo Travisanutto (KR-Parilla-Bridgestone) had to give up on taking the win in OK due to a technical issue that voided the pole position he earned with the victory of Prefinal-A. The lead was therefore inherited by his most quoted rival, the Dane Nicklas Nielsen (Praga-Vortex), who had to give way to the combative Swiss Leandro Anderruti shortly after. The latter was followed by Dexter Patterson (both on KR-Parilla). The second half of the race smiled to Patterson, who managed to find his way past Anderruti and flew towards the victory, while the British driver Joe Turney (Exprit-TM) stole the podium from Nielsen in the closing stages (in the photo on top, the prize ceremony for OK). Travisanutto keeps the classification lead with 141 points, but he is now followed by Patterson at 109.

The driver from Jamaica Alex Powell (Energy-TM-Vega), after winning Prefinal A in 60 Mini, started the Final from the pole position, but could not enjoy leading the pack for a long time. The Italian Brando Badoer (Parolin-TM), who dominated qualifying stages, took Powell’s position on top, but only for a handful of laps: the Belgian driver Ean Eyckmans (Parolin-TM) emerged on top among the very many drivers challenging each other, when Badoer slipped down the field due to a racing contact. The British driver Coskun Irfan (Parolin-TM) managed to gain advantage in this fight finding his way past Powell and closing the race behind Eyckmans in second place. Powell is still leading the classification at 169 points, but Eyckmans closed in at 137 points. In the photo above, the podium of 60 Mini.

Prefinal B’s victory earned the French Marcus Amand (KR-Parilla-Vega) a pole position start in OKJ Final. The Italian Gabriele Minì (Parolin-TM) managed anyway to install himself on top early on, and engaged in a fight with Amand that last half of the race. Minì eventually lost contact with the leader and the British driver Taylor Barnard (KR-Parilla) gained P2 behind Amand, but he lost P2 to the Dutch Laurens Van Hoepen (Tony Kart-Vortex) in the closing stages, as the latter completed a strong comeback race. The closing lap has been fatal to Barnard at the end of an endless battle. He lost in fact several positions, while the Russian Kirill Smal (Tony Kart-Vortex) got the most of this situation claiming the podium (in the photo above). Barnard (143 points) is still leading the classification in OKJ but Amand closed in and is only 3 points short of him now.

An error right after the start nearly cost Adrien Renaudin (SodiKart-TM-Bridgestone) the victory, but the French driver, who lost several positions, did not give up and bounced back overtaking his fellow countryman Emilien Denner (KalìKart-TM) for the lead. Renaudin recovered the lead in the closing stages after a duel with Denner, who eventually closed second. The Swede Axel Bengtsson (Kosmic-Vortex) had the upper hand on the Dutch Dylan Davies (DR-Modena) for P3. Renaudin leads the classification at 111 points, that is only 3 clear of Denner. Above, the podium of KZ2 at Castelletto.