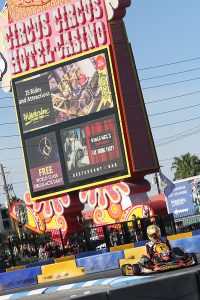 Italian Paolo De Conto will be center stage in his bid for a fourth SuperNats victory (Photo: EKN)

Karting is ‘the purest form of motorsports’ – that was the phrase coined by the late Dan Wheldon. On SuperSunday, the Dan Wheldon Ambassador Award Presented by Bell Racing USA will be awarded to one member of the karting community who embodies the spirit of the sport, such as Dan did with karting and racing, in general. For karting, the elite form is the KZ category. It compares to that of Formula One, with the quickest, most powerful engines in sprint racing, featuring many of the best drivers from around the world.

The former SuperPro division really kicked up the international flavor in 2007 when world champion Marco Ardigo made the trek to America and stole the headline category. Since then, only one USA driver has won during that time when Gary Carlton earned his second triumph in 2015 in what is now called the KZ division. Prior to Carlton’s emotional victory, and in the last two years, one driver has stood on the podium and offered his race-winning helmet to SKUSA President Tom Kutscher. Italian Paolo de Conto dominated those three SuperSunday main events to claim three massive payday checks of $10,000 each. The factory CRG driver has a chance to make history at the SuperNationals with a fourth victory, which would tie him with Connor De Phillippi for the most wins ever. The odds are in his favor with a fairly ‘new’ field of drivers set to battle in KZ, with less than half the field having raced in Vegas before.

The majority of the field is made up of drivers from the USA, which does bode well for shifterkart racing. Among them are a list of top S1 drivers over the last few years. Last year’s SKUSA Pro Tour S1 champion Jake French (DKC / Sodi Kart) is set to make his KZ debut. French finished on the podium in his last two S1 SuperNats starts and has been working hard over the last month for the transition to the international category. SKUSA #2 plateholder Kyle Wick is another USA driver set for his KZ debut. Wick will have the opportunity to work alongside De Conto under the CRG Nordam tent and feed off the two-time world title winner. S1 rookie Rory van der Steur (Tony Kart) was the quickest driver at the Rock Island Grand Prix this year with his KZ powerplant, scoring his first King of the Streets crown at the Labor Day weekend classic. After two years in S2, Rory is pulling the double duty card in Pro Shifter and KZ. 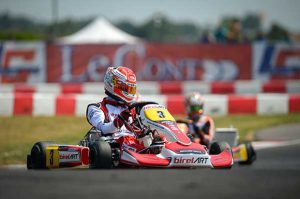 Marjin Kremers is among the top returning drivers in KZ (Photo: KSP)

Representing NorCal is SKUSA Pro Tour race winner Nic LeDuc (TKC / Sodi Kart). Passing on the Pro Shifter category, LeDuc is making his KZ debut this week. You’ll also have to look at Mathias Ramirez (GFC) as a contender in both the Pro Shifter and KZ classes. Ramirez is racing for Gary Carlton, the only American to win the category in the last 13 years, and he’ll have the tools in his hand to contend for the victory in both divisions. The 2016 S2 SuperNationals winner was among those who finished inside the top-10 last year in KZ, as just three drivers return. The third in the trio is Dutch driver Marjin Kremers. The Birel ART factory pilot was sixth in his KZ debut at the SuperNationals, and is coming in having enjoyed a solid 2018 season around the world.

Experience is always key at this level, and there is no one with more at the SuperNationals in KZ than Ron White (RWR / CRG). The veteran from NorCal is making his 19th start in Vegas. It was 2002 when White etched his name into the record books, winning the inaugural event at the Rio in SuperPro. Bouncing back and forth between this category and the S1 division, his best KZ result since his lone victory was fifth in 2007 – the final year at Sam Boyd Stadium. 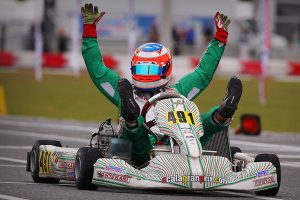 As mentioned in the opening, Formula One is the elite level in motorsports. KZ fills that role in karting. Over the years, the SuperNationals has brought the best in the world to Vegas, attracting a handful of professional racers back to their roots. You can start with Michael Schumacher gracing the paddock in 2009 and move to seeing current F1 driver Max Verstappen racing in KZ in 2012 before making the move to cars, and ultimately landing his spot with Red Bull Racing. A new name will be added to that list, as Rubens Barrichello will be on-track this year. The Brazilian who resides in the USA spends many days and weekends with his two kids racing karts. Barrichello occasionally jumps back into the seat, and the 46-year-old will make his SuperNationals debut in KZ.

Also returning to the SuperNationals is five-time Indy 500 starter Sage Karam. The multi-time WKA and Stars of Karting champion is set for a run in KZ, working with American chassis manufacturer iKart.

In looking over the KZ entry list, I don’t see anyone who will be able to stop Paolo De Conto from steamrolling to his fourth SuperNationals victory.  Of course, there are some extremely talented guys like Marjin Kremers, Jake French, Matias Ramirez and Nic LeDuc, but let’s be real, De Conto is a pro and his accumulative seat time in a KZ likely tops a majority of the field combined. So, I predict that Paolo will once again exchange his helmet for $10,000 of Tom Kutscher’s money.  For the remainder of the top-five, I’ll lean towards the guys I mentioned above, but I’m also predicting that Matt Jaskol, Max Hewitt and Rubens Barrichello will be in the hunt. Jaskol’s always quick when he shows up to run against the top Euro drivers, and if he’s on his game, he could surprise.  Hewitt was a revelation his year in his first season of shifter racing, dominating S2 in Texas and on the Pro Tour running faster than most of the S1s. And Rubens is Rubens. He’s stayed in a kart long after his retirement from F1, and he’s always a force.

History will be made on SuperSunday when Paolo De Conto crosses the line, checkered flags waving, the famous Rio in the background, and the fans cheering as the Italian wins his fourth SuperNationals main event. De Conto is the best when looking at this list, and I don’t see anyone challenging him for the top spot all week. Marjin Kremers is the best of the rest, with a fierce skill set behind the wheel. Ramirez matches that drive and determination, and grabs the third spot over former #1 Jake French who, when on his game, is among the best in the USA. You have to put Rubens Barrichello in the top-five. A former Formula One winner in the field. I don’t care of his age, as I have seen in races this year, this guy loves to race, loves to be at the track with his family, and will be a great addition to the SuperNationals 22.