Sold out category ready to rumble into SuperSunday 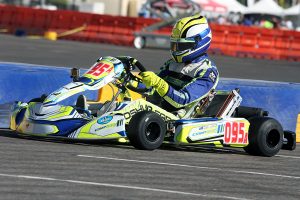 The first of three headline categories at the SKUSA SuperNationals 22 is the X30 Senior class. This year, it was one of two categories to sell out, reaching the cap for entries prior to heading into Las Vegas. While it may not be the over 100 drivers we had in 2008, the roster for the 2018 edition is stacked with talent. Reviewing the list, nearly half the field is a contender for the victory on SuperSunday.

You have to start with the former winners in the field. There are four previous winners in the category who have a chance to become the first-ever repeat winner in the class. Defending victor Joshua Car has landed on the podium both times he’s competed at the SuperNationals. The Aussie was third in 2017 before earning the top step last year. Car currently resides in Texas, having competed in the US F4 Championship with Crosslink Competition, the team he will race with at the SuperNationals. This new association has him moving from the CompKart to the Exprit for the 2018 edition of the race. Prior to Car winning on SuperSunday last year it was Jake Craig in 2016. A thrilling victory put the American at the top of the world that year, following an incredible last lap battle. The 2014 SKUSA Pro Tour champion has also gone the open wheel route, racing in F1600 in Canada all season, which helped earn him a spot on the coveted Team USA Scholarship to compete in the UK. Craig (RPM / Tony Kart) opened the season with victory at the WinterNationals on New Orleans and he was leading the SKUSA Pro Tour points heading into the SummerNationals. He was forced to miss the event with a scheduling conflict with his F1600 program. Craig is on his game and will be tough.

Three straight podium finishes stand as the record for Italian Marco Maestranzi. His first SuperNats in 2014 at the Rio resulted with a third-place finish, and then he won the inaugural event held outside the Las Vegas Convention Center in 2015. Marco was runner-up to Craig in 2016 before sitting out last year. Back in Vegas for another go, Maestranzi is a threat in his return with Top Kart USA. Dating back to 2010, in one of the wildest finishes in SuperNationals history, Andre Nicastro (NF Piquet / Kosmic) claimed victory. The Brazilian battled with multi-time Aussie champ David Sera in a wild drag race to the line, coming out with the checkered flag. The 37-year-old remains in the Senior category, making his 10th straight start at the SuperNationals with a total of three podium finishes, although he was unable to qualify for the main event last year. Sera is the next most experienced drivers in the field, and is set for his ninth SuperNationals in 10 years. Three podium finishes, including two runner-up results, has been the closest the Aussie champ has come to winning in Vegas. Returning with a chassis of his own name, Sera is hoping for one last shot at earning the victory on SuperSunday. 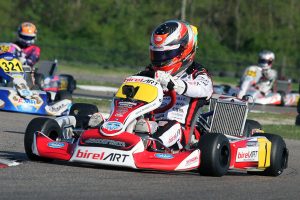 Two drivers who have won at the SuperNationals, just not in X30 Senior, are among those in contention. Ben Cooper is making a return to the seat and set for his debut in the X30 Senior category at the SuperNationals. The three-time Rotax Grand Finals winner won the DD2 division at the SuperNats in 2013. The UK native, who now resides in Canada, is joining the Rolison Performance Group / Kosmic operation for the week in Vegas. Pulling off the double-duty once again is 2017 S1 SuperNationals winner Billy Musgrave. The SoCal driver has run both classes all season long, both at the Pro Tour, California ProKart Challenge and Los Angeles Karting Championship. Musgrave is back on-board with Mad Croc Karting USA for the X30 Senior class.

The 2018 season saw six different drivers scoring victory on the SKUSA Pro Tour. In the end, everyone was chasing Ryan Norberg in the championship hunt. Norberg (PSL / Birel ART) clinched his record-breaking third straight title by putting together a truly impressive body of work. 2018 marks his third start at the SuperNationals, improving last year to fifth from his eighth-place finish in his debut in 2016 to clinch that first SKUSA Pro Tour title as a privateer. On his heels in the Pro Tour standings was Canadian Samuel Lupien (RPG / Kosmic). The Canadian was unable to claim a victory on the Pro Tour, but he did score victory at US Rotax Grand Nationals in July. Last year, Lupien was sixth in his debut at the SuperNationals, which bodes well for a run at the victory next weekend. Among those winning on the SKUSA Pro Tour include #3 SKUSA plate-holder Dante Yu (CompKart). Yu grabbed that elusive victory at the SpringNationals. His SuperNationals debut in Senior last year ended with him flipping over at the start on SuperSunday. Much to the crowd’s delight, Yu picked the kart up, turned it back over, jumped in and continued driving. All three are at the top of the EKN Driver Rankings powered by Bell Racing USA, and with the SuperNationals set the final stage to decide who will end the year as #1, we’ll soon see who earns the new helmet to become a Bell Athlete for 2019. 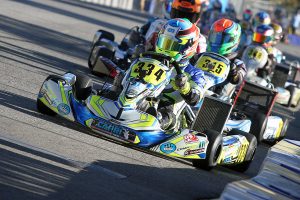 Other Pro Tour winners in the field include Christian Brooks (Nash / FA Kart), Brandon Jarsocrak (KSNA / Kart Republic) and Ryan MacDermid (Prime / Birel ART). Brooks has two top-six finishes in his first two starts in Senior, ending last year on the ‘removed’ list for a driving infraction. Jarsocrak comes in having endured a tough season on the Pro Tour side, with the exceptions of the victory at the SummerNationals and becoming the first two-time IAME Senior champion at the United States Pro Kart Series. MacDermid won the finale at the SummerNationals for his first career Pro Tour victory and is coming in hot, fresh off victory at the ROK the RIO. The Canadian is among a number of drivers attempting to pull off the ‘double down’ in Vegas.

Each year, there is only one world karting champion. 40 years ago, Lake Speed traveled to Le Mans, France to become the only United States driver to win the prestigious title. The Mississippi native went on to become a legendary NASCAR driver and remains a fixture in the sport of karting to this day. The 2017 SuperNationals welcomed that year’s champion Danny Keirle in Las Vegas competing in X30 Senior. This year, two world karting champions are in the field. Let’s start with 2016 title winner Pedro Hiltbrand. The Spaniard is making his SuperNats debut, racing both X30 Senior and Pro Shifter under the CRG Nordam tent. The second is the reigning world karting champion Lorenzo Travisanutto. The Italian dominated the SuperNats 21 main event on SuperSunday to cross the line as provisional winner, only to be handed a jump start penalty from the pole position. The controversial call was talked about for weeks following the event. The Rosberg Racing Academy driver is set up under the KartSport North America tent aboard the same Kart Republic brand that he raced last year.

The penalty put Travisanutto down to fourth on the podium, promoting Callum Bradshaw to the third spot. The Brit was stellar in his SuperNats debut. The CRG factory driver finished sixth at the CIK-FIA World Karting Championships along with a podium finish at the IAME International Final. Also under the CRG Nordam tent of world note is Brazilian Olin Galli, who placed ninth in Sweden. 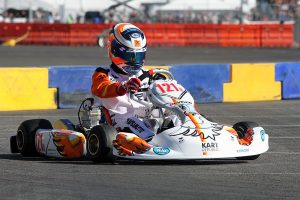 Speaking of the lady racers, Hannah Greenemeier is among the top Senior rookies in the field. The RPG / Kosmic driver finished the season as top rookie on the SKUSA Pro Tour, placing eighth. SKUSA Pro Tour X30 Junior #2 plate holder Mathias Morgatto is making the jump up to Senior at the SuperNationals. The Brazilian just announced an invitation to join the Tony Kart factory team, making Vegas his OTK debut. Another high-profile name moving up to Senior this year is Zane Maloney. The Barbados driver has raced in Europe all season long, placing third at WSK Champions Cup and fourth in the CIK-FIA European Championships in OK. He is moving back to where it all began in his Cadet years with KartSport North America and making his Kart Republic debut. Other Senior rookies include Texas ProKart Challenge champion Alejandro Jaramillo (Koene / Tony Kart), USPKS KA100 champion Zachary Hollingshead (OGP / Tony Kart) and former California ProKart Challenge champion Trey Brown (Nash / FA Kart).

The one consistent thought I have about any SuperNationals is that the track is a constantly developing entity. In a class with this much depth of talent, it’s truly impossible to identify who will be the winner before we go green, because I see a good dozen or so drivers who could hit the sweet spot and make it happen. If it was my money, I’d lay it on Travisanutto. He won last year and lost the victory on a very tough call, so he’s got that motivation burning in his belly. He won the SKUSA Winter Series impressively and he’s the new world champion. Lorenzo will hit the asphalt with a ton of confidence. I also think that Jake Craig will be on his game, as his open wheel car racing has only proven to expand his understanding of vehicle dynamics and racecraft.  Who’s the darkhorse to beat up on the international elite and veteran US stars? Dante Yu.  I could easily see this being his major breakout race. I’ll throw Pedro Hiltbrand, Marco Maestranzi, Brandon Jarsocrak, Ryan Norberg and Joshua Car in the ring and see who comes out to complete the top-five.

I am not sure how, after mentioning roughly half the field above, I can narrow it down to five drivers. Things are pretty unpredictable until racers actually hit the track on Wednesday for the first few sessions to see just who came out of the trailer fast, and who is struggling with not only the new circuit, but the grip level and the amount of competition in the field. Qualifying is so important and can make or break your week. With that, I am saying it will be a complete 180-degree ‘flip’ from last year to this year, as Dante Yu goes from zero to hero. A second Streets of Lancaster Grand Prix victory together with his first SKUSA Pro Tour victory notched, Yu has the ability to come out on top on SuperSunday. You have to give the world champions the respect they deserve. Travisanutto had his victory robbed last year, and I was 50/50 on picking him or Yu. Lorenzo lost the coin flip. The other is Hiltbrand, who is doing double duty, and it may help or hurt him, so I’ll put him fifth. #3 belongs to Jarsocrak, as it always does. This year is his time to stand on the podium after starting on the pole position in 2016. You can’t deny the talent that is Jake Craig. He’s in the kart more than you think he is. And so it’s easy for him to jump back and forth from cars to karts.

2 – World Karting Champions in the field