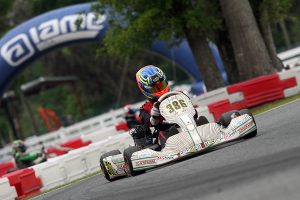 There has never been a 100cc category for Senior drivers in the 21-year history of the SKUSA SuperNationals. When the KA100 Senior class hits the track on Wednesday, it will be the first. The Senior category joins the Junior KA100 division in making its SuperNats debut this season, and there is a great deal of excitement surrounding the opportunity and the driver line-ups. Each division has a solid roster of drivers, however, it looks as if the Senior will be a heated battle all week long. Reviewing the entry list, there’s a great mixture of veterans and young guns all looking to add a SuperNationals win to their trophy case. Only 30% of the drivers competed in a X30 class last year – Senior or Junior – helping to build the total entry count overall.

First, let’s look at drivers who were successful in KA100 racing this season. The USPKS program was the first to welcome in the KA100 category last year, and was one of the most competitive divisions over the last two seasons. Florida driver Zachary Hollingshead (OGP / FA Kart) secured the championship in 2018, while pulling double duty on the year racing X30 Senior. He is scheduled to race both KA100 and X30 in Vegas as well, among the seven to do so in Senior. Blake Hunt won three times on the season in WKA Manufacturers Cup Series competition, earning the championship. Hunt (Kart Republic) is under the KartSport North America tent in his first SuperNats start. On the west coast, a number of top drivers from the IKF Grand Nationals in California should be watched. Nick Ramirez (Yesnick / Fullerton), Tomas Mejia (PKS / Tony Kart), and Jason Pettit (MRC / OTK) stood on the podium at the event. Pettit was the provisional winner in the S2 main event on SuperSunday last year, only to have the victory taken away by a jump start. Jason will pull the double duty, making his Pro Shifter debut as well at the SuperNationals. Edward Portz (Nash / FA Kart) pulled off the victory at the Streets of Lancaster Grand Prix, while Jenson Altzman (Ruthless / FA Kart) claimed the win at ROK the Rio. 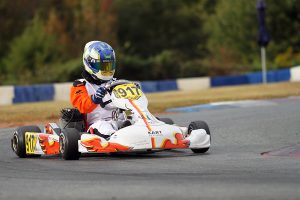 WKA Champion Blake Hunt is among those vying to be the inaugural winner in Vegas (Photo: EKN)

A number of more experienced drivers are in the field. TJ Koyen (Innovative / Exprit) is among those, as he’s made a number of starts at the SuperNationals, none more memorable then his drive in the LCQ in 2012 at the Rio (if only we had recorded the LCQ audio!). Koyen ran runner-up to Hollingshead in the USPKS season. Alongside Koyen in the Innovative tent will Colton Ramsey (Tony Kart). He is among those making the switch from X30 to KA for this SuperNats. Current ‘Throwdown’ champion Josh Hotz (Franklin / Merlin) is making his way to Vegas, sword in hand and ready to battle.

No driver is more experienced in the field than John Crow (MRC / Aluminos). The 2018 SKUSA Pro Tour S4 Super Master champion is primed for double duty as well, racing the KA100 division against drivers more than half his age. Crow is the one of two former SuperNationals winners in the field, having won the TaG Master class in 2005 at Sam Boyd Stadium. The other winner dates back 18 years to the K3 Novice shifter class when Greg Welch stood on top of the podium. Welch (CompKart) has been putting in the work at the Unser Karting in Centennial, Colorado both with the facility and in the driver’s seat, and he is set for his first SuperNats start since 2008. 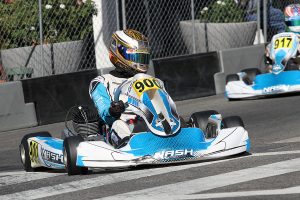 Crow is not the oldest driver in the field as 56-year-old Brett Harrelson holds that honor. The youngest is Nick Persing, having just turned 15-years-old, and both are racing under the Nash Motorsportz tent. The new KA100 class is bringing back some names from the past, including former SuperNats racers Austin Osborne (Tony Kart), Cole Nelson (Invader) and Steve Barros (Tony Kart). Nelson’s Invader is not the only American-made chassis in the field, thanks to the fact that Evan Stamer will make his SuperNats debut with Margay.

Coming back to their roots are two Road to Indy / IndyCar drivers. Neil Alberico (Tony Kart) raced in X30 Senior last year, and is moving over to KA100. Alberico is a former CKI champion in TaG competition, and has 36 starts in Indy Lights over the last three years. Former Road to Indy winner Conor Daly has logged five Indy 500 starts from 2013 to 2018, with a best finish of 21st coming in 2018. Daly will be joining Indy-based Top Kart USA in Vegas, making his first start since racing KZ in 2016. Other notables to watch on the week include Rock Island Grand Prix winner Jordan Bernloehr (Comet / FA Kart), Stephen Dial (CompKart), and Pauly Massimino (KSNA / Kart Republic). 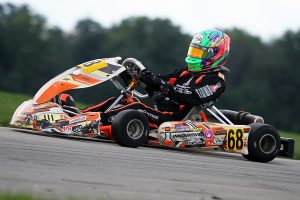 Veteran TJ Koyen is among the elders in the KA100 Senior division (Photo: EKN)

When it comes to the SuperNats, experience weighs greatly when I’m make my preview predictions, but I also give significant importance to confidence, momentum and the ability to win.  TJ Koyen has all that is needed to break through and put himself in the history books at the first ever KA100 winner at the SuperNationals. Koyen is a USPKS winner and has been through the grinder that is the heats and LCQ in Vegas. This could be one of those ‘youth and enthusiasm succumbing to age and treachery’ scenarios.  Edward Portz was truly impressive at the Streets of Lancaster GP, which I think puts him a place to take a run at the SuperSunday win, but toss USPKS champ Hollingshead and WKA champ Hunt firmly into the mix. Ramsey is my darkhorse to mix it all up, if he hits the ground running.

I think this podium, and KZ, along with the two Master divisions, will be the only podiums where you can serve champagne and not sparkling water. A full-on adult podium is my prediction. While I don’t want to put the hex on him for making him my pick to win it all, I think TJ Koyen winning at the SuperNationals would be huge. There is not another driver more respected in the paddock. From the elders to the young guns, they know Koyen is talented and knowledgeable enough to grab the SuperNats 22 trophy. Keeping it Midwest, Hotz will ‘throwdown’ on SuperSunday to grab the runner-up behind Koyen. Welch has put in the time and has the experience, as does Cole Nelson to put USA on the podium in the manufacturer side. And my dark horse, Steve Barros!

16 – Drivers who can legally gamble and drink while at SuperNationals