EKN Driver Rankings for 2018 Will Be Decided at SKUSA SuperNationals

For the 20th straight year, our editorial team has been keeping a running calculation of results from the sport’s major national and regional events to develop our ‘Driver Rankings’ program.  The system made its debut in the inaugural Shifter Kart Illustrated Magazine in 1998 and transitioned fully to eKartingNews.com in 2006 when SKI ended its production run.  In 2017, we partnered with Bell Racing USA to elevate the stature of the ranking system and, thanks to Bell, provide a pretty awesome reward for completing the season as the #1 ranked driver in either Stock Honda or TaG.  For the second straight year, Bell is providing EKN with a pair of RS7 Carbon helmets for the deserving drivers who cap 2018 as the absolute best in the business.  The final event included in 2018 EKN Driver Rankings Presented by Bell Racing USA is next weekend’s Superkarts! USA’s SuperNationals. 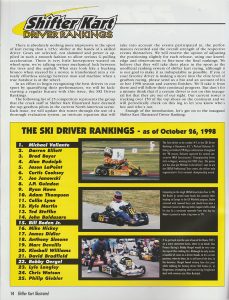 “The rankings are a program that I developed for the first issue of SKI, and my motivation was to truly put the best drivers in the national spotlight,” offers Rob Howden, eKartingNews.com Publisher and Editor-in-Chief. “The system has been designed and evolved over the years to look at a driver’s total body of work over the last 12 months, dropping old races and picking up new ones each time we calculate the updated rankings. This year’s SuperNationals will be dropped and the new results will be picked up to see who ends the season as the #1 ranked driver in the country. David Cole deserves all the credit for the program these days, as I’m drawing on his math degree to manage what has become a massively intricate spreadsheet. It’s a ton of work.”

The rankings take into account the overall strength of each event, first factoring in the prestige and position of the event or series within the sport and then adding components like the size and quality of the field. If there are 40 of the top-50 drivers on the entry list, that adds more weight to that race than an event with only 10 of the current top-50.  The EKN staff is often asked about the program, and we simply respond that it’s been perfected over the years and each race is in a constant state of assessment.  We use a driver’s best seven finishes over the last 12 months, which allows for a DNF or two, but the bottom line is that you have to perform at the biggest races of the year if you want a place near the top of the charts.

Last year, Florida’s Ryan Norberg capped the season as the #1 ranked driver in the TaG category, finishing the season with a fifth at the SKUSA SuperNationals and his second straight SKUSA Pro Tour X30 Senior championship. Likewise, Texan Jake French was crowned as the #1 ranked Stock Honda driver in the country, winning the SKUSA Pro Tour S1 title before finishing second at the SuperNationals.  Both Norberg and French received new RS7 Carbon helmets from Bell Racing USA’s Chris Wheeler.

Who will win the prestigious EKN #1 ranking this year?  We’re about the find out.