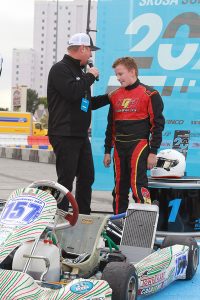 Junior-level racing has been part of the SuperNationals from its very beginning, back when the organization featured a heavy emphasis on 80cc shifterkart competition. Then, in 2006, Tom Kutscher took over ownership of SKUSA and focused on the adult classes only for the 10th running of the event. At the 2007 SuperNationals, SKUSA added the S5 Junior Stock Honda class, and then in 2008, TaG Junior made its debut. Every year since, a new driver has stood on top of the podium, representing four different countries. Among those to earn victory on SuperSunday are two current Formula 1 drivers – British talent George Russell in 2011 and the impressive Canadian Lance Stroll the following year.

During the first eight years of the TaG Junior category, which is now the X30 Junior class, no driver has repeated to log that second victory. In 2018, there are two drivers who have a chance to etch their name in the history books as the first two-time winner in the division. The first is 2016 victor Tyler Gonzalez. The Florida driver won in his SuperNationals debut, however, he was unable to compete for victory the following year, placing 15th. That checkered flag went to Texan Jak Crawford. The 13-year-old started on pole and duplicated Gonzalez’ feat of winning in his Junior debut at the SuperNationals. Both have even more experience under their belts this time around, with Gonzalez leaving his spot at CRG Nordam to run under the Team Benik program in Vegas. Crawford joins the same Nash Motorsportz operation that he has been winning with since his Cadet days. 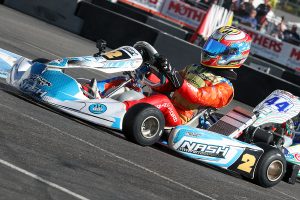 Jak Crawford won in his Junior debut at the SuperNats in 2017 (Photo: EKN)

There’s also a new kid in town, and his name is Arias Deukmedjian. The Florida driver was solid all season long on the SKUSA Pro Tour, winning both finals at the SpringNationals to help earn himself the season championship, adding his name to a reputable list of former title winners in the category. In the last eight years, only one driver has won the SuperNats and Pro Tour title in the same year – Brazilian Yurik Carvalho – in 2013. Arias is also making the move to the Praga chassis after running OTK all season under the Leading Edge Motorsports tent. Among his top challengers on the season was fellow Floridian Jeremy Fairbairn (Supertune / Tony Kart). The tallest Junior driver in the field uses his height as a positive, moving his weight where it needs to be in the kart seat. Fairbairn – who will carry the SKUSA #3 plate – was solid over the summer months, winning a number of races and is attempting to improve on his third-place result from last year. 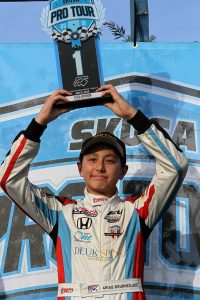 A total of four former SuperNationals winners are in the Junior field, including last year’s Mini Swift winner Connor Zilisch (LAK / Tony Kart). Zilisch has built up the momentum heading into the SuperNationals after a solid second half to the season. He leads a long list of first-time Junior drivers at the SuperNationals that include last year’s Mini podium finishers Diego Contecha (Orsolon / Parolin) and Santiago Trisini (KSNA / Kart Republic), along with USPKS IAME Junior champion Nicholas Terlecki (FMS / Merlin). Aussie driver James Wharton (KSNA / FA Kart) is among the youngest race winners in Australian karting history, making his Junior debut at the SuperNationals.

A large majority of the field is international. Watch for Italian Gabriele Mini (Parolin), Brit Alex Lloyd (LEM / Formula K) and Dutchman Kas Haverkort (CRG Nordam) to make some noise on the week. 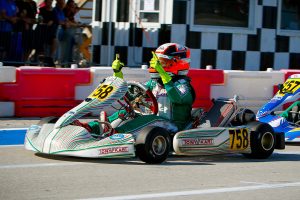 Sebastian Montoya is looking to double down in Vegas (Photo: On Track Promotions – otp.ca)

Aside from Crawford and Fairbairn, Sebastian Montoya (Tony Kart) is the third returning driver from the podium in 2017. The second-generation pilot won the SKUSA Winter Series program in Florida and is coming off victory at the ROK the Rio. He is not the only familiar name on the list as Fernando Barrichello (NF Piquet / Kosmic) is set for his SuperNationals debut. 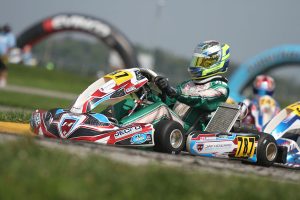 As David has detailed, one of the factors that plays into a consistent streak of new winners in the Junior class is that many of the reigning champs or frontrunners each year either graduate to Senior or move into cars.  Over the years, the X30 Junior race has been a little chaotic at times, but the introduction of the pushback bumper has certainly cleaned up the contact, especially in the opening corners. Fairbairn has been incredibly impressive this year and I’ll tab this event as his breakout race, pushing his name to the top of the Junior class. Montoya continues to improve his racecraft and you can’t deny his aggressive nature, so I expect he and Duekmedjian to be right there. Crawford is continuing his move into cars and comes off his F4 debut in Mexico, so we’ll see if he can make the quick switch back to karts. I expect he’ll do so much little to no issue. Maxson’s fast, he’s settled into his position with CRG Nordam, and he could just as easily fight for the win as any place on the podium.

Crawford or Gonzalez…Gonzalez or Crawford…I’m going with neither. History says we don’t have repeat winners in the Junior class, and that includes the K2 or 80cc Junior categories along with the S5 class, where we had nine different winners in nine different years. One free beverage if you are the first to post on FB or Twitter who the last 80cc Junior winner was! Anyway, back to my prediction. The previous winners, and Pro Tour champion Arias Deukmedjian, are already looking to cars. Many know it’s tough to bounce back and forth, thus I put them out of the top-five. Montoya has the hot hand, winning in Vegas already and who knows, could be another former SuperNationals victor that ends up in Formula 1. With the tighter layout of the Rio, you have to have muscle, and Fairbairn is not afraid to flex them. Mars and Zilisch will stand out early on in qualifying and the heat races. Maxson, the former SKUSA Mini Pro Tour champion (2016), will be the silent assassin, sneaking onto the podium with a great run on SuperSunday.