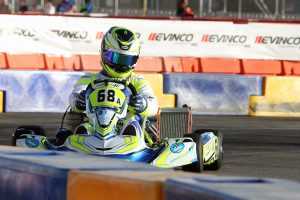 You can forget about odds when looking at the stellar entry list for the X30 Master field. This is the 16th year for the Master category, dating back to the second year that the SuperNationals were held at the Rio in 2003. Each and every year, the category grows larger, more talented, and increasingly more international. This year is no different with half the drivers coming in from outside the United States.

Four specific drivers from outside the USA have combined to win seven of the last eight SuperSunday main events. The last is Kris Walton (CompKart), who won in his second Master start at the SuperNationals in 2017. The race last year was called early after contact with a barrier soaked the race track in turn four. A lengthy clean-up was needed to dry the area, and as a result, Walton was named the victor after just 13 laps were completed. The Aussie is back to defend his crown, and is aiming to be the one taking the checkered flag after a full length run in 2018. 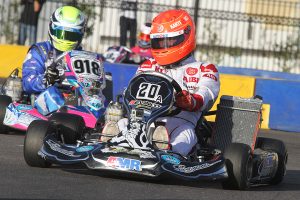 Kip Foster comes in hunting to join the three-win club at the SuperNationals (Photo: EKN)

On his bumper at the time of the red flag was two-time winner Kip Foster (KF Kart). The fellow Aussie claimed the top step of the podium in 2014 and 2015, landing on the podium six times in nine years. Two of those years, Foster was the provisional winner, only to be removed in tech. Those wins went to Brazilian Leonardo Nienkotter (CompKart). His victories in 2010 and 2011 were by default, before earning a third straight win on the racetrack in 2012. Nienkotter, coming off a SKUSA Pro Tour championship season, has six podium finishes in his eight starts at the SuperNationals and he will carry the SKUSA #1 plate.

Renato David and Travis Irving round out the former winners in the field. David (Orsolon / Birel ART) won in 2016 after a penalty was issued to provisional winner Eduardo Dieter that removed him from the top of the podium. Both Brazilians are among the contenders this year. David did not race the Pro Tour in 2018 but won at the recent ROK the RIO, while Dieter is joining the CRG Nordam tent for 2018. You have to go back 12 years to the 2006 event to find Irving’s name on the list of SuperNationals winners. Irving competed in the TaG Master category as a ‘Heavy’ driver, beating the field around the Sam Boyd Stadium parking lot aboard a Top Kart. Now, the CompKart driver is among the top Master drivers in the USA at the young age of 33, and he is gearing up for his third straight SuperNats at the legal age. 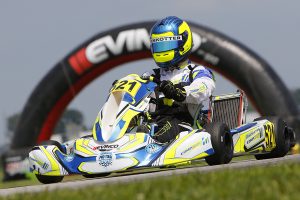 A number of quality drivers who are now just above the minimum age will be among those to watch when karts hit the track on Wednesday in Las Vegas. Matt Johnson (Nash / FA Kart) placed fourth in his Master debut at the SuperNats last year. 2018 marks the Master debut for Billy Lewis, Darin Marcus, Wesley Phillips and Scott Saunders. Lewis (Comet / FA Kart) is a former RoboPong 200 winner at New Castle Motorsports Park. Marcus (RPM / Tony Kart) was winning on the SKUSA ProMoto Tour in Pro Shifter competition in the early 2000s, and won at the USPKS program in his Master debut earlier this year. Phillips (RPM / FA Kart) is the 2005 US Rotax Grand Nationals champion. Saunders, an Australian native that calls North Carolina home, is joining DRT Racing aboard a DR Kart for his Master debut.

Top Pro Tour contenders will be in the field, including two-time SKUSA champion Derek Wang (BBR / FA Kart), who will head to Brazil after the SuperNats to compete in the Rotax Grand Finals. His best finish at the SuperNats was third in 2016. Jess Peterson will carry the SKUSA #3 plate for the first time, completing his first full year in the Master class. Peterson (PGR / Birel ART) was eighth in his SuperNats debut last year and was a podium finisher in Senior back in 2013. Last year’s SKUSA #2 plate holder Laurentiu Mardan is hoping for better luck in Vegas. The last three years have resulted in DNFs, as the 2018 USPKS Masters champion makes his SuperNats debut aboard his new Tecno Kart.

From the first time I watched Kip Foster in action at the SuperNats, I knew that I’d never discount him from a race win in Las Vegas. It really doesn’t matter where he starts. If his stuff is good, he’s going to the front. Nienkotter was the powerhouse on the Pro Tour all year, but I think it’s just too hard to bet against Foster for the win. Walton won last year in a shortened race and was sixth in 2016. He’ll be back on the podium, and it feels like Matt Johnson has settled into the Masters mix and he’s on his game.  I’ll add both Johnson and Jess Peterson to the podium. My darkhorse for a podium is Jonathan Silva, who has come on in the second half of the season and scored the 100cc Masters win at the ROK the Rio event last weekend.

With international drivers making up half the field, I’m going to guess that my predictions for this class will be off after SuperSunday. I don’t have the full confidence that one of the many drivers we didn’t mention above won’t stand out during the week and show up for SuperSunday. That said, I’m going with what I know, since I would need at least a few weeks to research all the names in the field and I only received the entry list on November 1. History will repeat itself, as it typically does in Master racing at the SuperNats, with Walton winning for a second straight year. I don’t know what he’s done in 2018, but if it’s anything like last year, he’ll be one to beat. Nienkotter was solid in his Pro Tour debut season, and really has an opportunity to join Connor DePhillippi as a four-time winner at the SuperNationals. Veteran Matt Johnson is solid at temp circuits, winning the Streets of Lancaster Grand Prix in September to gear up for his second SuperNats in Master. Foster could have won his third SuperNats last year, and driving a kart with his own name on it will be a great story to watch in Vegas. There is no one who has more fun at a kart track than Scott Roberts. If this guy lands on the podium, I want in on that party at the VooDoo Lounge at the top of the Rio on SuperSunday.