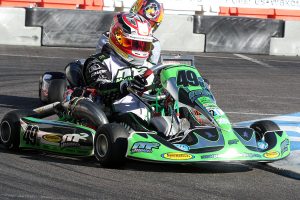 Bonnier Moulton will make his 22nd start at the SuperNationals (Photo: EKN)

In the year 2000, the Master category made its debut at the SuperNationals as the G1 division. The category branched off with the addition of the S4 Master class in parallel with the introduction of the Stock Honda package. The evolution continued in 2016, when the S4 Super Master category was brought onto the national scene to provide drivers 45-years-of-age and older a chance to compete against one another. Current participation numbers have motivated Superkarts! USA to move into a new era for shifterkart racing, combining the Master age groups into one division once again. History from the SuperNationals will be made once karts hit the track on Wednesday in the category, and even more depending on who takes the checkered flag on SuperSunday.

The Master Shifter division has among the most experienced SKUSA racers at the event. Many competitors have been part of SKUSA and the SuperNationals since the beginning. One driver in particular will make his 22nd start at the SuperNats – the only driver to do so – Bonnier Moulton. The ‘ageless one’ stood on the podium at the first SuperNationals in 1997 alongside inaugural winner Alex Barron and the talented Bobby Oergel. Moulton (Tony Kart) remains a fixture in the sport, working with Rolison Performance Group throughout the season when not providing his talents to racers at the grassroots level with MSquared Karting in Utah. Bonnier is not only a co-designer of the circuit for SuperNationals 22, he is also a three-time winner at the event. Moulton’s first victory came in 2004 in the G1 division at the inaugural event at Sam Boyd Stadium. He then went back-to-back in 2011 and 2012 in S4. Moulton has the chance to tie Connor DePhillippi at the top of the SuperNationals winner list with four victories at the Vegas spectacular. 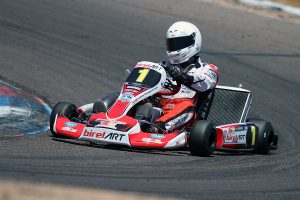 Moulton is not the only Master Shifter driver gunning for history, so is California pilot Jimmy McNeil (PKS / Aluminos). One of the most recent winners in the S4 category in the field this year, McNeil has three wins of his own. The last came in 2015, which was preceded by a G1 victory in 2011 and his first S4 win in 2010. McNeil has a history of checkers-or-wreckers however, and ended up placing fifth in last year’s S4 main event.

Jordon Musser is one to make history of his own. In August, the Texan secured his third SKUSA Pro Tour S4 Master championship in a matter of six years. Prior to that, he was the first driver to win four US Rotax Grand Nationals in a span of five years, including a three-peat in Senior from 2002-2004. Musser also holds three wins at the Rock Island Grand Prix King of the Streets event (2009, 2012, 2013). The 3G Kart Racing / Birel ART driver is now coming off victory at the ROK event this past Saturday and will definitely be one to watch. 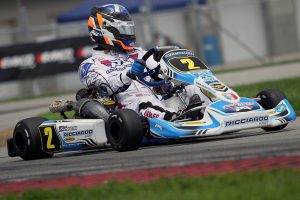 Coming up just short to Musser in the championship chase during the past two seasons was Ryan Kinnear. The 2016 SKUSA Pro Tour S4 champ was runner-up to Musser the last two seasons, but came out of SuperNationals 21 as the victor for his first triumph in Vegas. Kinnear was runner-up to Musser at the Rok event last weekend after pacing the way all week, adjusting well to his new Ricciardo ride running under the Phil Giebler Racing banner. Finishing third to Musser and Kinnear in the SKUSA Pro Tour standings was Nathan Stewart (DKC / Sodi Kart). The Kiwi native improved greatly in 2018, putting in stronger, more consistent pace to earn the #3 plate for 2019.

With the melding of the S4 and S4 Super Master classes back into Master Shifter, this means the top S4 SM drivers will run the 01, 02, and 03 plates for 2019. Carrying those digits are John Crow, Mike Jones and Rod Clinard. Crow (MRC / Aluminos) was dominant all season long. In addition to winning his first SKUSA Pro Tour championship, Crow won the California ProKart Challenge and Los Angeles Karting Championship titles in the process. After winning his first Streets of Lancaster Grand Prix in the S4 SM class in September, the City of Lancaster and SKUSA awarded John with their $15,000 racing scholarship for the 2019 season. 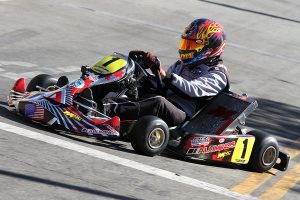 Jones (DKC / Sodi Kart) ended 2017 with an emotional first victory at the SuperNationals, following it by placing runner-up to Crow in the 2018 Pro Tour standings. For a third straight year, Clinard (CRG Nordam) ended up with the third spot in the standings. All three certainly have the speed to contend for a podium position this year at the SuperNats. This fact also includes two-time S4 Super Master Pro Tour champion Robert Marks (PKS / CRG), and former Streets of Lancaster GP S4 SM winner Patrick O’Neill (RWR / CRG).

The under-40 crowd in the field for Vegas is strong, featuring one former winner and a host of others looking to add their names to the record books. Chris Jennings (DRT / DR Kart) won it before he was 30, winning when the class was a ‘Heavy’ alternative to the S3 division running in 2008. Ten years later, Jennings has three podiums amidst five straight top-10 results.

All five 2017 podium finishers are returning for this year’s edition, including Aussie Jason Faint (DKC / Sodi Kart). In his first S4 start, Faint was runner-up to Kinnear, coming back for that one more spot up on the podium. Terry Lawrence put in a solid drive last year to place third, the first podium for the CKR USA operation. Alan Michel (MRC / Praga) came up one spot short of the podium in sixth last year. Rob Logan (Nash / CRG) was runner-up in 2015 for his one and only podium finish at the SuperNationals, coming off a second-place finish to Marks at Streets of Lancaster Grand Prix. Leading the way that weekend in September was Nick George (PKS / Aluminos). Slight contact with the barriers while leading in the main event cost him his first SOLGP victory, with George expected to be fast again in Vegas. Racing her first SuperNationals as a married woman, Tiffany (Chittenden) Hamilton is set to make her fifth start in the Master Shifter category. 2017 was the best SuperNats result yet for the Aluminos driver, placing eighth.

The combination of the S4 Master and Super Master Stock Honda classes is a little disappointing to me, because I think that the 45+ category could be a popular one in the future, but I understand the numbers.  If the numbers aren’t there, you evolve and adapt. This will jam the big guns of both categories together, including Super Master badasses like John Crow and Robert Marks.  Even so, Jordon Musser is having a tremendous year and he and Ryan Kinnear have been going at it hammer and tong everywhere they face off. I think Musser capping off his unbelievable resume with that elusive SuperNats victory, after a hardcore fight with the aggressive Jason Faint and reigning winner Kinnear. Terry Lawrence always impresses the hell out of me when he shows up at the SuperNats and I expect he’ll be back on the podium. Rob Logan looks really good at Lancaster, but the tight nature of the primary passing zone held him back more than his competition.  With more open passing opportunities, including two hairpins, I expect Logan to be in the top-five.  I think Jimmy McNeil and Bonnier Moulton could surprise despite not driving much this year, as could Rod Clinard, Nathan Stewart, Alan Michel, Chris Jennings and Mike Jones.

There is no other karting CV quite like that of Jordon Musser. There really remains one big hole in it, a SuperNationals victory. Musser could be at the top of his game after all this time, and seems to be unbeatable, and thus why he’s my pick for the victory. Right there throughout the season has been Kinnear. He too has the tools at hand for victory, and a second straight, but I feel he will come up just short at the line. Rob Logan is due for another podium at the SuperNationals, as is last year’s runner-up Faint. And you can’t deny the effort and determination that Crow has, and should have the pace to be on the podium after SuperSunday.