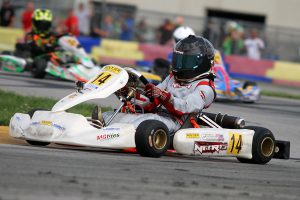 The SKUSA SuperNationals 22 is not the first to welcome 100cc engines to the Vegas spectacular. The first came in 2005 at Sam Boyd Stadium, when the Junior Intercontinental A (JICA) class was offered, won that year by all-time SuperNats victory leader Connor DePhillippi. The second came in 2008 at the Rio with the HPV 2 Junior class, which was won by Merlin driver Tommy Andersen. Ironically, the KA100 engine is a branch off the KPV engine platform from IAME, which was a piston-port based powerplant. The KA100, developed for the Australian market, has made its way to the United States and has been taking the American karting scene by storm throughout the 2018 season.

The first program to welcome the engine full-time in 2018 was the United States Pro Kart Series. The inaugural championship went to Jacob Graham (Nitro / Exprit). Graham won twice during the six rounds, and is among the most experienced KA100 racer in the field. Donald Whorton II (FA Kart) finished second to Graham, picking up his first victory in the category during the recent WKA Grand Nationals in in Mooresville. Also winning that weekend to take home a WKA Eagle was Tyler Wettengel (KSNA / FA Kart). The North Carolina driver came back to win after breaking his arm in a crash this summer. 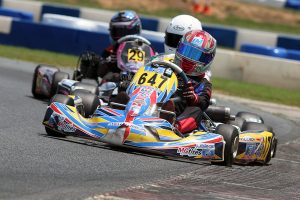 Luca Mars has become one of the top Junior drivers in his first full season at this age-group (Photo: EKN)

Experience outside the KA100 powerplant is plentiful when looking at the entry list. Keeping on the east side of the country, Connor Zilisch (LAK / Tony Kart) is making his Junior debut at the SuperNationals after winning the Mini Swift class on SuperSunday last year. Kaden Wharff (Top Kart) is the 2018 WKA Yamaha Junior champion, earning nine victories in 12 rounds. Luca Mars (SCR / Tony Kart) won twice on the year in the KA100 Junior division in USPKS competition. Tyler Maxson (CRG Nordam) is among nearly half the field pulling double-duty by racing both KA100 and X30, along with Comet Kart Sales’ Garrett Adams (FA Kart).

The West Coast is represented well in the category, with likely the most experienced Junior driver at the event. Oliver Calvo (PKS / Parolin) is a multi-time winner at the Streets of Lancaster Grand Prix, and was victorious in the inaugural KA100 Junior feature in September. That was after he secured the inaugural ‘Duffy’ trophy in the category at the IKF Grand Nationals in September. These two wins have set Calvo up for a shot at the IAME USA Triple Crown Challenge. Should Oliver win in Las Vegas, he would earn the $10,000 bonus for scoring all three races in the program. 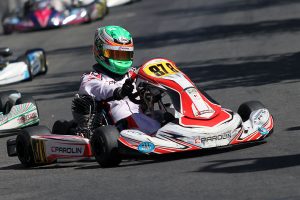 There are additional series champions and young guns who are ready to tackle this year’s SuperNationals. Aiden Kempf (Tony Kart) was the KA100 Junior champion in the KPX Karting Championship, Alan Tang (Parolin) is the LAKC X30 Junior champion, and Ethan Ho (OTK) was a front-runner this winter at the Challenge of the Americas while also competing at the CIK Academy Trophy under the Taiwanese flag.

The international front is strong in the KA100 Junior category. James Wharton (KSNA / FA Kart) leads the Aussie contingent. He became the youngest Junior race winner in Australia, and has raced in Europe this season. Last year, he was a Cadet champ back home and placed on the podium at the Rotax Grand Finals. This will be his third SuperNationals start. Jacob Douglas is no stranger to the USA. He will join the Aluminos squad in Vegas, coming in as a two-time New Zealand champ.

I really enjoyed watching the KA100 Junior running at the Streets of Lancaster GP this year, and I expect that we’re going to see a lead pack of 4-5 karts come SuperSunday. With $10,000 on the line with the Triple Crown Challenge, I’ll pick Calvo to win, fueled by that little extra motivation to go for it. At 15 years-of-age, this will be Oliver’s final Junior race and he’ll want to go out on top.  Zilisch and Mars now have their first full year of Junior racing under their belts, and they are two of the best young drivers in the country, along with Maxson. With a strong SuperNats finish in X30 Junior last year, I’m betting on Tyler in second, followed by Zilisch and Mars. Whorton’s had added international experience to his resume this year and like the other four drivers I’ve picked for the top-five, he’s running both KA100 and X30 Junior, which will provide crucial track time at the Rio.

It seems that Luca Mars has won in nearly every type of kart he’s jumped into. Mars went 2-for-2 in his only KA100 starts this year. Why not go 3-for-3? Zilisch has grown as a driver from the beginning of the year to now. The time he spent in Italy this summer flipped a switch to help him in his transition from Cadet to Junior racing. I have no doubt that he will be among those to beat all week. I can’t do it! I’ve picked Calvo to win or podium at the SuperNats, and he hasn’t done it. So, I can’t pick him to win, although I want to. So I’ll just put him in third. Whorton is a solid talent, and I’m excited to see what he will do in Vegas. The same for Adams. The talkative one in the Dismore/Adams family is growing into a great fourth-generation karter.