Cadet racing has been a part of the SKUSA SuperNationals program since 1998 when the Kawasaki 60cc powered K3 Novice shifterkart class ran out at the X-Plex. The gearbox category was part of the famed event until 2005, and it helped to shape many future stars in the sport. Twenty years later, the Mini Swift division has picked up the sword and will be hosting a number of worldwide talents, including world title winners and repeat national champions. 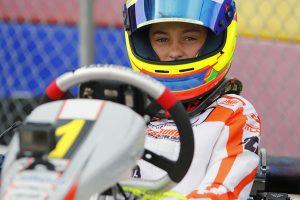 Last year’s SuperSunday Final has an obvious cloud hanging over it, as the top two finishers were removed from the official results following an in-depth engine inspection. One of the drivers removed from the results for an incompliant engine was provisional winner Carson Morgan. The Californian went into the event as the newly-crowned SKUSA Pro Tour champion and came out on top of a great battle on the racetrack. His engine, along with that of runner-up Brent Crews, were deemed to be outside of the Superkarts! USA rule set. Morgan struck back during in the 2018 season, winning his opening race at the SKUSA Winter Series to again prove his considerable abilities behind the wheel. By the end of the season, Morgan (RPM / Kart Republic) had secured his second straight Pro Tour title thanks to winning one of the Finals at all three doubleheader events on the schedule. Additional redemption lies in front of Morgan, who carries the SKUSA #1 plate into Las Vegas once again.

All three of the championship podium finishers from 2018 are among the favorites heading into Vegas. Vice-champion Jace Park (Parolin) has the momentum from the SummerNationals, where he won his first SKUSA Pro Tour feature, helping to put him in the second spot on the standings. The most recent winner is Kai Sorensen, the SKUSA Pro Tour #3 and USPKS champion. Sorensen (Supertune/Tony Kart) finished second in the ROK the RIO event this past weekend, and as a result, he’s moved his odds of winning to the good. The former SKUSA Pro Tour Micro Swift champion will certainly be in the fight for the win. 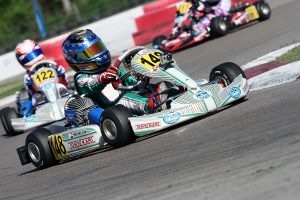 Momentum is on the side of Florida driver James Egozi (Photo: EKN)

Before out-gunning Sorenson’s at the Rio for the Rok victory, 2018 Florida Winter Tour champion James Egozi (Koene / Tony Kart) was one of the Team USA drivers to reach the main event at the Rok Cup International Final in South Garda. Egozi’s recent performances have him rising the odds maker list. The Florida driver headed a list of drivers representing Team USA competing in Italy that included Morgan, Sorensen, Nikita Johnson and Miguel Costa. Johnson (Energy) and Costa (Benik) will join both Morgan and Sorenson in Vegas for the SuperNationals.

Costa is among the four podium finishers from last year’s Micro Final who have made the jump to Mini Swift in 2018. Vinnie Phillips (Benik) won last year in Micro while Brazilian Vinicius Tessaro (Kart Mini) won in 2016, and placed fifth a year ago. Both drivers are making their Mini Swift debut at the SuperNats, as is Micro podium finisher Christian Miles (KSNA / Kart Republic). 2017 SKUSA Pro Tour Micro Swift champion Elliot Cox (Vemme) and ROK the Rio Micro winner Parker DeLong (Benik) join the list of drivers making their Mini Swift debuts this year. 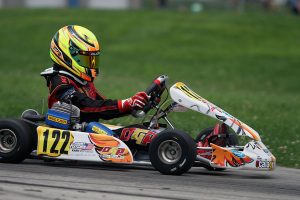 Jeremy Fletcher is among the more experienced drivers in the Mini Swift field (Photo: EKN)

Looking at last year’s Mini Swift podium, Jeremy Fletcher (OGP / Kart Republic) is the lone driver to return for another shot at the elusive win. Fletcher won at the SKUSA WinterNationals in New Orleans in March, and he put in a solid performance at the IAME International Final in October to end up sixth in his debut. Placing runner-up at the event in France was British driver Freddie Slater (Benik). Slater finished 10th in Las Vegas last year, which easily puts him among the top international drivers in the field. Fellow countryman Brandon Carr (Benik) is no stranger to racing in the USA. Carr was the vice-champion on the SKUSA Pro Tour last year in Micro Swift, and is set for his Mini Swift debut at the SuperNats.

When you think international racing, Diego LaRoque quickly comes to mind. The Arizona driver scored the inaugural Micro Max title at the Rotax Grand Finals in 2016, and was set to start on the pole position in last year’s main on SuperSunday, only to have a mechanical issue put him on the sidelines before the green flag waved. Redemption is very likely on his mind, as he will join Nick Tucker’s Nitro Kart operation in Vegas. Jamaican Alex Powell (SCR / Energy) nearly added his name to the list of world title winners in Italy, finishing just inches away from the victory, and he certainly introduced his name on the international stage.

I struggled with these selections, as I scrolled up and down the entry list.  There are a legitimately a dozen or more drivers who I believe could hit on the right combination of mental and chassis perfection to stand on top of the SuperNationals podium this year.  Guys like James Egozi and Kai Sorenson are coming in with momentum and confidence, which is key, but I still lean toward veterans who will be able to handle the pressure that fires up on SuperSunday. Carson Morgan has developed great poise and patience, which is fed by his continuing successes. I look for Morgan to win over Jeremy Fletcher, but to be honest, I could go either way on that battle.

Only four drivers are racing in the Mini category for a third straight year. These four – Egozi, Fletcher, LaRoque and Morgan – make up my top-four. The easy sell is Morgan, with his two Pro Tour titles and the provisional winner last year. LaRoque is probably the most experienced, and Egozi certainly has some momentum after his performance at the ROK. However, I’m going to go with the hottest chassis that seem to be flying off the shelf with ease. The Kart Republic with Jeremy Fletcher behind the wheel. If ‘White Cheddar’ can keep it on pace throughout the heat races, he will be there to grab the victory on the final lap. Of course, I’d love to see the Vegas Double done by Sorensen, however, I think he will come up short but land on the podium.

0 – Defending winners in the field

12 – Drivers moving up from Micro from last year

16 – Returning drivers to the Mini class at SuperNats

28 – Drivers who have competed at SuperNationals