The 2018 season for the Los Angeles Karting Championship came to a close on October 14 at the CalSpeed Karting Center in Fontana, California. The event was Round Nine of the season points chase, with the drivers in contention able to secure the points they needed to be crown class champion.

The championship was up for grabs in the P1 Engines Mini Swift division as Jesus Vasquez held a 20 points advantage over Kasey Gillis. Vasquez struck first with fast time in qualifying. Leading all 10 laps, Jesus remained at the front at the checkered flag of the Prefinal. Gillis ended up third with Izaac Gutierrez in between. Vasquez lost the lead early, and continued dropping down the order to end up fifth. Gillis jumped to the lead and fought with Gutierrez for the victory. At the line, Gillis had the edge by 35 thousandths to earn the third triumph of the season, and gain the LAKC championship. Enzo Deligny ran fast lap of the race to win the fight for third over AJ Zarcone.

In just his second start of the season, Jake Drew won his second Nash Motorsportz X30 Senior Pro victory. Drew was able to sweep the final round, leading from qualifying to the final checkered flag. Drew was able to edge out Round 3 winner Dante Yu in qualifying by 36 thousandths of a second with Joseph Daniele back by five hundredths. The order remained the same after the Prefinal with the trio swapping positions before Drew scored the win. Drew took advantage of the pole position in the Final, leading all 18 laps for the victory. Billy Musgrave drove his way up to second, dropping Yu to third. Edward Portz was fast lap of the race, placing fourth with Daniele in fifth. Alex Siragusa drove to a ninth-place finish, securing the season championship over Colby Dubato and Portz. 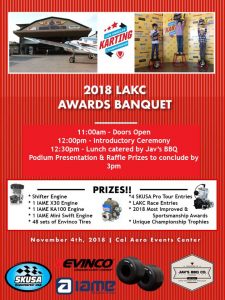 John Antonino continued his dominance in the Empire Karts Micro Swift category, winning his seventh victory of the season to claim the LAKC championship. Antonino swept the action for Round Nine, capping it off with a nine-second victory in the Final. Alexander Gonzalez was second in his best finish of 2018 with Keagan Kaminski joining them on the podium. Tristan Young and Kane Martin completed the top-five.

Dustin Salverria was able to claim his first victory in the Ryan Perry Motorsport X30 Junior Expert class to close out 2018. Salverria fought with championship leader Alan Tang all day. Tang grabbed fast time in qualifying while Salverria took control in the Prefinal. Tang led just one lap before Salverria grabbed the win. Dustin followed it by leading all 18 laps of the Final for the victory. Tang settled for second, securing the LAKC championship. Jacob Yesnick joined them on the podium, while Bryce Stevens was fourth and Frankie Mossman in fifth. Making his debut in the MDG X30 Junior Novice class, Cooper Hicks swept the action at the finale. Hicks led the day, beginning in qualifying and winning the Prefinal before driving away to an 11-second victory. Hunter Hicks drove to second, beating 2018 champion Timothy Carel.

Another first time winner on 2018 was Travis Irving in the Mike Manning Karting X30 Master class. Irving swept the finale in only his second start of the season, winning the Final by 1.3 seconds over 2018 champion Branden Bell. Steve Martin joined them on the podium with Tony Rossetti and Larry Hayashigawa completing the top-five.

The KA100 race group saw 24 drivers take part at the LAKC finale, with many preparing for the upcoming SKUSA SuperNationals 22. Inaugural IAME USA West KA100 Senior class winner Henry Morse started out the day as the top qualifier. An issue hit him early in the Prefinal, which dropped him down the order and allowed Billy Musgrave to grab the win. Musgrave led the first five laps until Alex Siragusa took control. Siragusa led the remainder of the race to score victory in his first class start. Steve Barros grabbed fast lap of the race in his runner-up performance with Nick Persing third on the podium. Musgrave ended up fourth with Nick Ramirez in fifth. The championship was locked up by Luis Perez at the end of the day.

John Crow was able to win two of the three divisions he competed in on the weekend. The first came in the Superkarts! USA KA100 Master division with a sweep of the event. Crow scored the victory by 11 seconds over Howard Combee with Robert Perez locking up the season championship with a third-place result. The second came in iKart West Briggs 206 Master, where Crow swept the event for his ninth victory of the year. Mikey Griffin was the runner-up in the race and in the point standings. Crow had his sweep of the season taken away in the PKS S4 Super Master Stock Honda class. An issue on the opening lap dropped him to the tail of the field, allowing Myan Spaccareli to score the victory. Crow rebounded to finish third behind Warren Kindberg, as the SKUSA Pro Tour champion secured his second LAKC class championship.

The KA100 Junior division was added to the class lineup for the season finale to provide SuperNationals 22 preparation. Alan Tang missed qualifying, but came back to win the Prefinal and Final. The X30 Junior champion led all 18 laps over Steven Grafton and Gaven Perez, who posted fast lap of the race.

The Phil Giebler Racing Open Shifter division welcomed more drivers preparing for the SuperNationals, including veteran Matt Jaskol. The Vegas native scored the win on the weekend to cap off his preparations for SuperNats 22. Tyler Coffman drove to second with top qualifier Vivek Tandon in third. Slava Prikhodko ended the year as the champion in the category.

Wrapping up the 2 Wild Karting X30 Senior Intermediate championship with victory was Cody Diggs. Payne Brawley set fast time in qualifying, but it was Diggs that reigned the field in the Prefinal and Final. Diggs won the main event by 1.4 seconds over Ryan Carey and Lauran Adams. Grant Leclaire made a statement in his Mack Motorsports Briggs 206 Senior class debut with a dominating victory. Leclaire won both the Prefinal and Final, winning the main event by over 19 seconds. Matias Podboj drove to second over Troy Jones in third. Joey Paonessa secured the championship before the event began.

Other winners / champions on the day include:

The Los Angeles Karting Championship is set to honor the 2018 champions and top finishers at the Awards Banquet. The event is scheduled for November 4 at the Cal Aero Events Center in Chino, California. Doors open at 11am with introduction ceremony beginning at Noon. Lunch catered by Jav’s BBQ will follow with the awards giving and raffle prizes to conclude by 3pm. A range of IAME engines and Evinco tires will be part of the raffle including entries to LAKC, SKUSA Pro Tour. For more about the Los Angeles Karting Championship program, please visit LAKC.org and ‘Like’ them on Facebook and follow on Instagram.