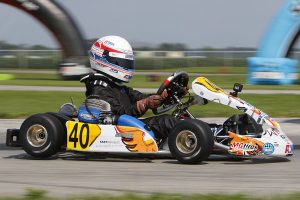 The Micro Swift category made its debut on the SKUSA Pro Tour in 2016 and at the SuperNationals, as well. International drivers won the first two editions, with Brazilian Vinicius Tessaro and Great Britain’s Vinnie Phillips taking the victories. Both are moving up the Mini Swift ranks for 2018, which sets up the storyline for a third straight new driver to take the top step of the Micro Swift podium on SuperSunday.

You don’t have to look far to find contenders right away, beginning with the top-three from the SKUSA Pro Tour – Max Garcia (KSNA / Kart Republic), Caleb Gafrarar (Parolin), and Ben Maier (Nitro Kart). The trio combined for the six victories, with Gafrarar holding the advantage with three, Maier earning two and Garcia with one. Garcia’s victory was the biggest, as his Sunday win at the SummerNationals clinched the Pro Tour championship for the young Florida driver. Gafrarar also holds the advantage in the experience category, having competed in the two previous editions, placing fourth a year ago. Maier ended up 15th last November, while this year’s event will be the first SuperNationals for Garcia.

A number of regional champions and winners will be in the field. Rolison Performance Group’s Graham Trammell (Energy) scored the California ProKart Challenge title in 2018. The driver from Oregon won the first three races of the year, winning a fourth later in the season as he landed on the podium in all six rounds. Trammell’s top challenger on the year, winning twice, was John Antonino (Super Cadet). Antonino will be the youngest competitor at the SuperNationals, as he turned eight at the beginning of September. The Bakersfield, CA driver won the LAKC title, and scored a big win at the Streets of Lancaster Grand Prix.

Representing the east coast is Cameron Weinberg, the latest winner at the WKA Manufacturers Cup Series. Part of the Nitro Kart operation, Weinberg won two of the last three rounds of the series. Along with two-time WKA winner Gavan Boschele, Weinberg will lead the Nitro Kart contingent, as both will be making their SuperNats debut. Mexican driver Ivanna Richards (Tony Kart) is a Texas ProKart Challenge winner in 2018, and will be vying to improve on her 18th place-finish a year ago. Other notables include SKUSA Pro Tour podium finisher Ethan Ayars (Parolin) and California PKC podium finisher Logan Chambers (PKS / Benik).

Looking at the international contingent, two names stick out. Lewis Francis is making his way over from Australia. Francis (KSNA / Kosmic) is the reigning Cadet 9 champion. Brazilian Bernardo Gentil (Orsolon / Benik) is gathering a large following in his first year of Cadet racing. Gentil already has over 14k followers on Instagram. Other notable names in the field are Rocky Moran and Enzo Beltrao Nienkotter. Moran is a third-generation driver, son of motorsports driver Rocky Moran Jr. and grandson to Rocky Moran. The father-son duo created Moran Raceway in Beaumont, California – which was the premier circuit in southern California from 2003 until it closed in 2007. The third-generation Moran will be making his SuperNats debut along with Nienkotter, who is the son of three-time SuperNats winner and 2018 SKUSA Pro Tour champion Leonardo Nienkotter of Brazil. 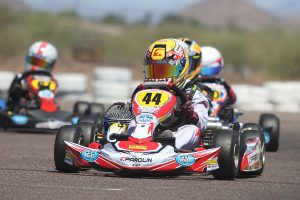 I love watching racecraft develop in the Micro Swift throughout the year and, for the most part, the category provided us with the best wheel-to-wheel racing all season.  I think that experience plays a big role at the SuperNationals, although international drivers have taken the first two Micro Swift wins. Based on speed and development throughout the year, and his pace at the ROK the Rio event this weekend, I look for Gafrarar to improve on his fourth from last year’s SuperNats to be in the hunt all week and to come out of the pack on SuperSunday. Maier is incredibly hard to bet against, because he knows how to win and he’s an impressive talent. I slot Ben into second this year as part of a wild four-driver fight up front with Francis and Garcia. It’s going to come down to the last lap, that’s for sure. Based on the pace we’ve seen from Aussie champions in the past, who have come to the SuperNats, I expect Francis to podium.  I also like Julien to be in the scrap up front, as he’s shown great pace all year. 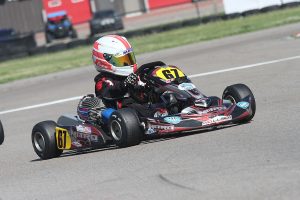 Looking at the 2018 season as a whole, Maier has been the more dominant driver. Maier has won at least one main event at all major races in 2018 except for two, including racing at the SKUSA Winter Series, SKUSA Pro Tour, United States Pro Kart Series and WKA Man Cup Series. Maier earned the title at the Winter Series, USPKS, and WKA, and that’s why I’m putting him on top of the podium. Gafrarar is just as experienced as Maier, however, he will come up just short as he did in the Pro Tour standings. Garcia will make it six of seven podiums on the year to cap off his final Micro season. International drivers have won the last two, so I have to put one on the podium. That will be Aussie Francis. And who can deny the youngest driver at the SuperNationals from the podium. Antonino was impressive in his SOLGP victory and while he will be fast, I don’t think he has the muscle to reach higher than fifth.

0 – Defending winners in the field

10 – Drivers who competed in 2017 SuperNationals

16 – Drivers who competed on the Pro Tour this season