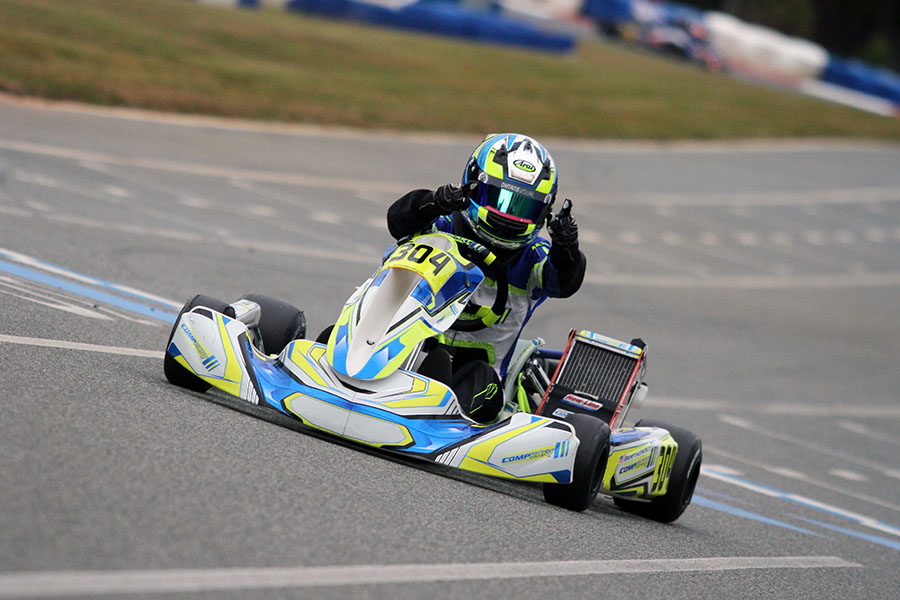 Alex Bertagnoli won in his debut on CompKart in IAME Senior (Photo: EKN)

The final day of action at the 2018 WKA Manufacturers Cup Series came to a close on Sunday. Clear skies provided a warmer day despite some wind early on that temperatures cold at the GoPro Motorplex in Mooresville, North Carolina. The 10 categories competing on the weekend battled for 10 more WKA Eagle trophies to each victor. Championships were also on the line with the final round of the 12-race championship deciding the 2018 title winners. 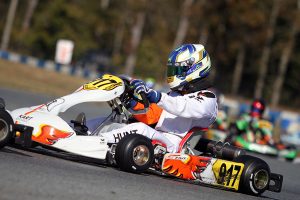 Blake Hunt stamped his name on the KA100 Senior title with victory in final round (Photo: EKN)

Racing seemed to be amped up in all categories, especially in the IAME Senior division. Saturday winner Brandon Jarsocrak (Kart Republic) began where he left off, at the front. Setting fast time in qualifying, the KartSport North America driver led all the laps of the Prefinal. From the beginning of the Final, the fight was on. Ashley Rogero (Tony Kart) applied pressure with Austin Garrison (Fullerton) and Alex Bertagnoli (CompKart) right there. They continued to go back and forth until Garrison dropped Jarsocrak down to third. He fought his way back to the point with two laps remaining. Rogero struck back to lead at the white flag, with Jarsocrak striking in turn one on the final circuit. Both went deep into the braking zone, washing out wide on the exit. This allowed Bertagnoli to slip past both for the lead. Jarsocrak and Rogero continued their fight into turn four, bringing the rest of the top-five into the mix. This gave Bertagnoli the free pass to the checkered flag, scoring the victory in his J3 debut. Garrison advanced up to second, clinching his championship with the 11th podium of the season. Blake Hunt (Kart Republic) ended up third while Jarsocrak and Rogero got into it again in the final corner. Rogero ended up in the barriers while Jarsocrak crossed the line in fourth. He was penalized for the contact, promoting Tahlon Yockel (Kosmic) with Colin Neal, moving over to the CompKart this morning, placing fifth. 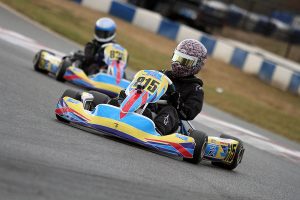 The KA100 Senior class started very similar to Saturday. Pauly Massimino (Kart Republic) set fast time once again in qualifying, this time edging out Mike Giessen (Tony Kart) for the Prefinal win. They were joined by championship leader Blake Hunt (Kart Republic), running double duty. The three lined up and pulled away from the rest of the field with Giessen in the middle. Massimino led until Giessen pulled the trigger prior to the white flag. On the final circuit, Massimino retook the top spot, and ran a defensive line into turn eight. Giessen tried to drop even lower into the corner. The two drifted wide, and Hunt slipped past both and cruised to the checkered flag for his third victory of the season (five including the two sub races with Brandon Jarsocrak) to clinch the championship. Massimino ended up second with Giessen in third. Emory Lyda (Merlin) ran fast lap of the race, advancing from eighth to fourth with Ashlyn Breuer (CompKart) in fifth. 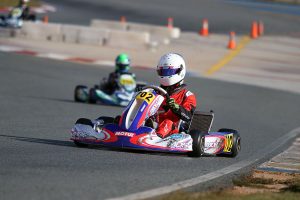 IAME Junior Saturday winner Hayden Jones (Tony Kart) set the stage for Sunday, posting fast lap of qualifying by just 34 thousandths quicker then Connor Ferris (Top Kart). Championship leader Josh Green (Kosmic) was just seven hundredths off in third, and jumped out to the win in the Prefinal with Jones dropping back to third. Jones had issues at the start, and was dropped even further down the order to eliminate his chance at repeating. Green jumped out to a big lead early with Ferris as the lead challenger. Leading all 18 laps, Green posted fast lap of the race to earn his second victory of the season, and first career Grand Nationals Eagle. Ferris ended up second with Jones fighting his way up to the podium in third, dropping Tyler Ferris (Top Kart) to fourth with Matthew Duncovich (Kart Republic) completing the top-five. 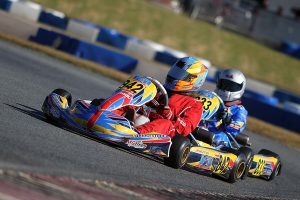 It was a two-driver battle all day in the KA100 Junior division. Saturday winner Tyler Wettengel (FA Kart) and Donald Whorton II (FA Kart) set the tone all day. It was Whorton with fast time in qualifying and winning the Prefinal. The two pulled away from the rest of the field with Wettengel leading the majority of the race. Wettengel ran fast lap of the race, however, Whorton won the fight, able to hold off Wettengel on the final circuit to score his first Grand Nationals victory. Hunter Yeany (Exprit) won the fight for the third spot on the podium over Brooke Nachtmann (Tony Kart) and William Cox (Tony Kart). 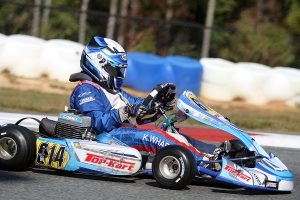 Kaden Wharff won his ninth on the season in Yamaha Junior (Photo: EKN)

Kaden Wharff stamped his name on the championship trophy for the Yamaha Junior division. Wharff (Top Kart) swept the action on the day, earning his ninth victory for a perfect score in the ‘best of 9’ championship standings. It was a fight early on in the Final with all five drivers running nose to tail, with nearly everyone taking a turn at the point. Wharff finally assumed the point and went on to earn the checkered flag over Ian Quinn (Kosmic) and William Cox (FA Kart). Garret Davis (FA Kart) and Kendall Hedge (Tony Kart) rounded out the top-five. 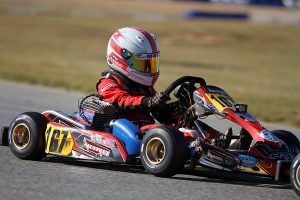 Ben Maier went from third to first in final corners to win his first in Mini Swift (Photo: EKN)

It only took three main events for Ben Maier to earn his first victory in the Mini Swift division. The 2018 Micro Swift champion moved up Sunday at New Castle, completing his first full weekend in the category. Maier (Nitro Kart) qualified down in ninth with Liam Kelly (Nitro Kart) scoring fast time in the session. 2018 class champion Brent Crews (Nitro Kart) scored the Prefinal win while Maier worked up to fifth. It was Saturday winner Sebastian Ng (Nitro Kart) jumping out to a big lead early. Crews and Maier hooked up, and ran down Ng. It was Crews and Ng fighting for the win in the closing laps, as Maier sat back about a few kart lengths. Fighting through turn eight on the final circuit, it continued into turn nine. They drifted wide and Maier went from third to first through the right hand corners. Maier held off a last attempt by Ng at the line, winning by 41 thousandths of a second. Crews settled for third with Raiden Nicol (Tony Kart) in fourth and Paige Crawford (Benik) fifth. 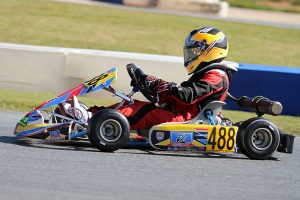 Danny Dyszelski secured the Yamaha Sportsman championship before coming into the weekend. Dyszelski has a WKA Eagle trophy to go alongside that, after winning the Briggs 206 Cadet race on Sunday. Dyszelski (FA Kart) came out as the winner in the Prefinal, edging out top qualifier Cameron Weinberg (Kosmic). They along with Ben Maier (Nitro Kart) took turns at the lead. Maier was leading on the final circuit, running a defensive line. Jumping the curb at turn seven, he stayed to the inside with Weinberg trying the outside. When they got to turn eight, Maier’s machine went straight, after a loose spindle detached, pushing Weinberg out wide. That opened the door for Dyszelski to grab the lead, and the victory. Weinberg recovered to finish second with Christopher McKeithan (Nitro Kart) joining them on the podium. Sebastian Ng (Nitro Kart) and Raiden Nicol (Tony Kart) completed the top-five. 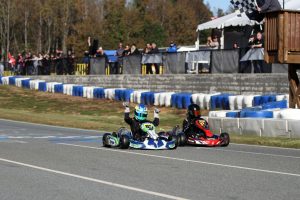 The day looked to belong to Miles Murray (Nitro Kart). Murray was able to set fast time in qualifying. The Prefinal was slowed by two red flags, with all drivers able to be cleared of any injuries. Murray won against the depleted field. A slow start dropped Murray back, and eventually out of contention. Saturday winner Spencer Weingberg (Nitro Kart) was unable to restart during one of the red flag periods, and started toward the back. He worked his way forward to the front, joining Hoyt Mohr (Nitro Kart) and Ayden Patty (Nitro Kart). Weinberg led for four laps before Mohr took back the spot. They swapped the lead on the final circuit, drag racing to the line with Mohr reaching it first by 53 thousandths of a second for his first career victory. Patty completed the podium with Gavan Boschele (Nitro Kart) in fourth and James Newell (Kart Republic) in fifth. 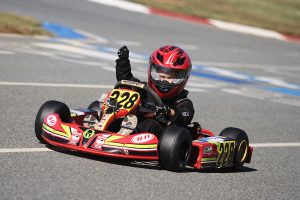 Saturday winner Hudson Floyd repeated as the winner in the Kid Kart division. Floyd was able to hold off Beckham Lewis for his fourth straight victory. Jacob Schaible placed third with Max Cristea fourth and Chase Groh completing the top-five.