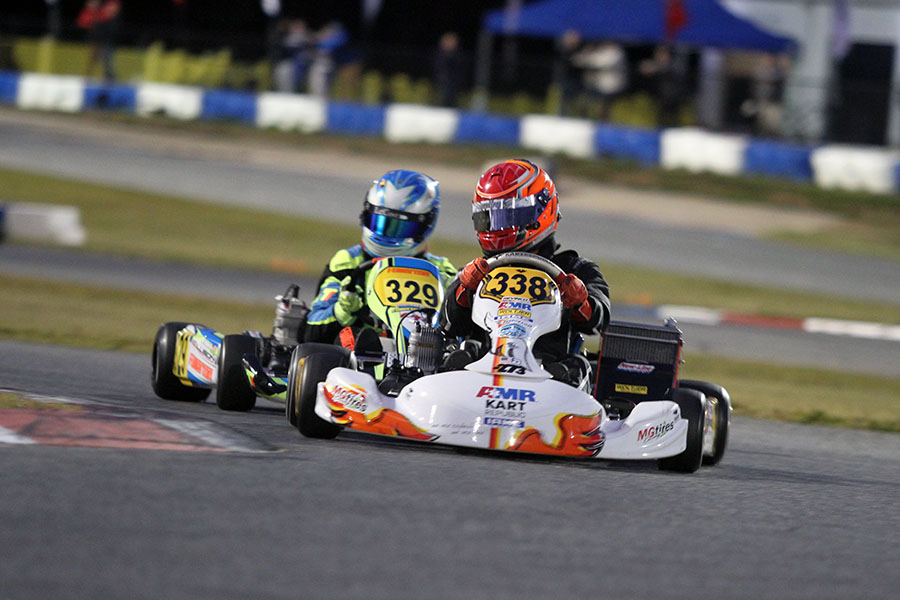 The 2018 WKA Manufacturers Cup Series Grand Nationals has already become a memorable one. Following heavy rain all day Friday during practice that saw only a handful take to the GoPro Motorplex track in Mooresville, North Carolina, Saturday was a full day of action with qualifying, two rounds of heat races and the main event. The day began with a wet track, as competitors hoped for the track to dry before qualifying. It did not, and ended up becoming a game of chess toward the end of the timed sessions before it finally did dry. A small shower in the main events extended the day, with the 10 categories earning the first round of WKA Eagle trophies on the weekend. 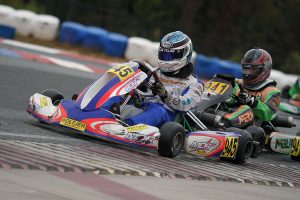 Mike Giessen was named the winner in KA100 Senior after a great battle all day (Photo: EKN)

Brandon Jarsocrak added a WKA Eagle trophy to the mantel for the KartSport North America operation with his victory in IAME Senior. It was a near sweep as Elliot Budzinski (Kosmic) grabbed fast time in qualifying as the first session on the track with dry tires. Jarsocrak (Kart Republic) took control when racing started, winning both heat races. In the Final, under the lights after a long day and a few delays, provisional champion Austin Garrison (Fullerton) put on the pressure. The two went back and forth. Contact with Ashley Rogero (Tony Kart) allowed Garrison to take the lead briefly before Jarsocrak took back the top spot. Garrison closed in on the final laps, making one last effort into turn nine. Jarsocrak shut the door, slowing the pace of Garrison. Jarsocrak would go on to score the victory, his second victory of the season. Rogero would slip past Garrison for the second spot. Terrin Odom (CompKart), coming back from a collar bone injury, ran down Alex Bertagnoli (CompKart) late to take the fourth spot. 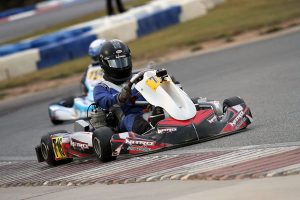 Veteran Mike Giessen (Tony Kart) has a number of WKA Eagle trophies in his shop. From Junior to Senior, Giessen was a top competitor for a number of years. Today, the elder driver showed the young guns he still has it in the KA100 Senior class. Giessen fought his way from fourth to the lead in both heat races, taking the win after hard fought battles. The Final was no different. Top Qualifier Pauly Massimino (Kart Republic) jumped out to the front early. He and Giessen were joined at the front by Emory Lyda (Merlin) and Blake Hunt (Kart Republic). Massimino led until things heated up at the front with three laps remaining. Giessen slipped past for the lead and Hunt attempted to follow. Contact was made and sent Massimino spinning off at turn 9 and out of the race. Lyda actually came out with the lead after all of that, and was able to hold off Giessen in the final laps to cross the line first. A penalty for early contact dropped Lyda down to third in the final classification, thus giving the victory to Giessen and runner-up to Hunt. Taylor Stanford (CompKart) drove to fourth with Brad Brittin (Merlin) up six spots to fifth. 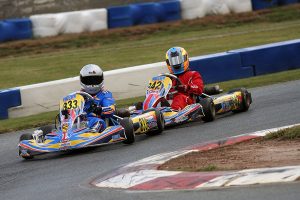 Meghan Peri (FA Kart) helped her shot at the championship in the Yamaha Senior class, winning the main event. Peri was able to edge out her brother Hunter Peri (FA Kart) for the victory with title contender Cayla Chapman (Top Kart) in third.

It was a near perfect day for Hayden Jones (Tony Kart) in his run to a career first WKA victory in the IAME Junior class. Jones was second in qualifying to Kaden Wharff (Top Kart). Jones was able to win both heat races to earn the P1 spot for the start off the Final. Jones led the majority of the race with Wharff, championship leader Josh Green (Kosmic) and Connor Ferris (Top Kart) right there. Green appeared to have the answer, working his way to the point by lap 13. Jones was able to respond, taking the lead back before the white flag and holding on through the final circuit to earn his first career WKA victory. Green settled for second with Wharff rounding out the podium. Ferris was third with Matthew Duncovich (Kart Republic) in fifth. 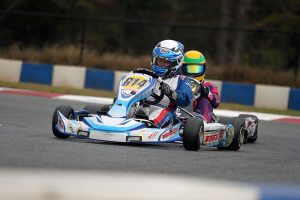 An eighth victory on the season for Kaden Wharff in Yamaha Junior (Photo: EKN)

Just a few months ago, Tyler Wettengel (Kart Republic) broke his arm in a race at the GoPro facility. Back and healthy, Wettengel drove great throughout the day to end as the winner in the KA100 Junior class. Brooke Nachtmann (Tony Kart) was the top qualifier, however, Wettengel won both heat races. Wettengel jumped out to the lead in the Final, with Donald Whorton II (FA Kart) jumping on his bumper. The two ran 1-2 with Whorton waiting until the end to make the move. Wettengel responded, and held off Whorton at the line by 93 thousandths of a second. Nachtmann was a close third with Wharff crossing the line in fourth. A penalty for the fight on the final lap put him down to 13th, thus moving Hunter Yeany (Exprit) to fourth and Dylan Christie (Kosmic) into fifth.

The numbers were lacking in the Yamaha Junior division this weekend with provisional champion Kaden Wharff earning a eighth victory on the season. Wharff won both heat races and held off Ian Quinn (Kosmic) for the Final victory. William Cox (Tony Kart) ended up third with Kendall Hedge (Tony Kart) and Garrett Davis (Tony Kart0 completing the top-five. 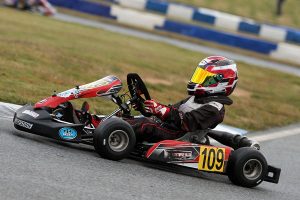 Sebastian Ng drove the victory in Mini Swift, his first of the year (Photo: EKN)

It seemed to be a perfect script for Brent Crews. The now two-time IAME International Final champion started out the day suffering a no time in qualifying with a transponder issue. That dropped him to 14th on the grid for the opening heat race in Mini Swift. Nitro Kart teammate Sebastian Ng took fast time in qualifying and won the opening heat race. Crews advanced up to fourth in the opening moto, before besting Ng in the second heat race. The two jumped out to the lead in the Final, with Ng on the bumper of Crews. Sebastian took over the point with three laps remaining, and was able to fend off the late charges by Crews to earn the WKA Eagle trophy. Crews settled for second with Alex Delemo III (DR Kart) earning his first career WKA podium. Ben Maier was fourth with Danny Dyszelski (Energy) up from 11th to fifth. 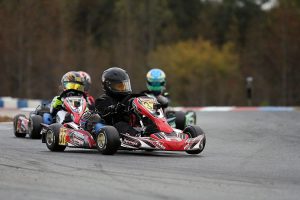 For a second straight round, Cameron Weinberg (Nitro Kart) scored the victory in the Micro Swift division. It was a challenge for Weinberg, who qualified P1 but made contact with a barrier while leading in Heat 1 to retire. Driving from 12th, Weinberg drove his way to the win in Heat #2 after Pittsburgh double winner Gavan Boschele (Nitro Kart) won the opening heat. Weinberg had to come from sixth on the grid in the Final to join the lead group, including Boschele and Spencer Conrad (Nitro Kart). Weinberg took over the point on lap nine, leading the way to the checkered flag for the victory. Boschele was seocnd with Conrad third. Hoyt Mohr (Nitro Kart) and Miles Murray (Nitro Kart) complete the top-five. 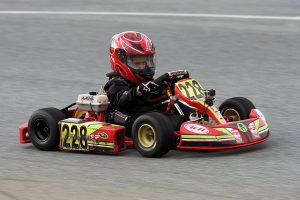 Weinberg’s first victory on the day came in the Briggs 206 Cadet class. After setting fast time in qualifying Weinberg (Kosmic) was runner-up to Raiden Nicol (FA Kart) and Sebastian Ng (Nitro Kart) in the heat races. The lead group ended up being six drivers, with Weinberg down to fifth at one point late in the race. On the final circuit, he went from fourth to first, reaching the line first for the victory. Spencer Conrad (Nitro Kart) had fast lap of the race, placing second with Ben Maier (Nitro Kart) in third. Danny Dyszelski (FA Kart) was fourth with Nicol in fifth.

Hudson Floyd ended the day on top in the Kid Kart division. Floyd earned his third straight victory of the season to extend his championship lead. Beckham Lewis was second with Casey Quinn joining them on the podium. Sam Tutwiler drove from 11th to fourth with Landon Buher up for spots to end up fifth.