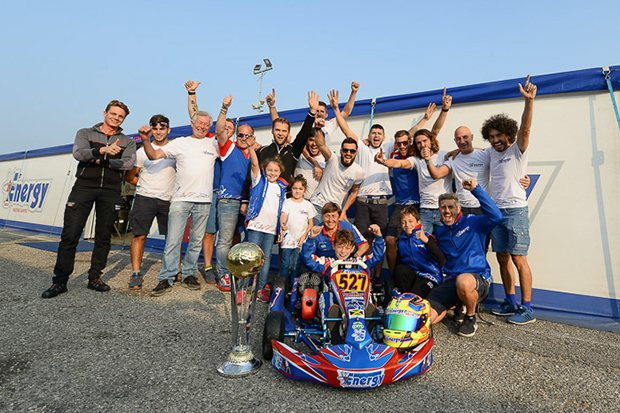 In recent weeks, the drivers in Energy Corse colours have mounted podiums in the biggest international events. In mid-October, Andrea Kimi Antonelli and Alex Powell scored a spectacular double at the Rok Cup International Final in the Mini category, with 143 entries! A week later, again at Lonato, Powell climbed on the highest step of the podium at the opening of the WSK Final Cup. More than ever, the performance of the Italian chassis and the way in which Energy Corse trains its drivers are valuable for young people eager to succeed at the highest level.

Double for Energy Corse at the Rok Cup

At the Rok Cup International Final, the Energy Corse chassis were particularly well represented in Mini Rok during the Final, in the top 10 and on the podium! Indeed, the Final was fought between Andrea Kimi Antonelli and Alex Powell, who took pole position at the beginning of the meeting. These two drivers had already emerged as leaders of their group in the Qualifying Heats. Antonelli finally won by 48 thousandths against Powell after an extraordinary race. This superb double was completed by the presence of seven other Energy Corse chassis in the Final, with the following results: 9th for the Italian Flavio Olivieri (ASD Revolution Motorsport), 13th for American Morgan Carson, 18th for Jonathan Weywadt, Denmark, 23rd American or Nikita Johnson, 27th for Russian German Foteev, 29th for Latvian Tomas Stolcermanis and 34th for the Australian Marcos Flack. Proof of the beautiful performance of the Energy brand worldwide!
In this Final of the Rok Cup, Karol Pasiewicz of Poland (V-Kart Racing Team) finished 3rd in the Mini Trophy and the Swiss Michael Muller (New Technology Team) placed 7th in Shifter. Among the other great performances of the weekend, the Italian Federico Albanese (Energy Corse srl) finished 5th in Junior and his compatriot Giuseppe Gagliano (New Technology Team) 5th in Senior.

A victory to start the WSK Final Cup

The Energy Corse team welcomed many drivers during the first of three WSK Final Cup races at Lonato. While there was no success for the young OK-Junior entrants, Alex Powell dominated the 60 Mini Final by leading from start to finish. He had already achieved the feat of winning his Prefinal and his five Qualifying Heats, despite a high number of entries (95) and incessant clashes in this category.

American Morgan Carson was further honoured by finishing 9th in the final, while Italy’s Flavio Olivieri (ASD Revolution Motorsport) and Russia’s German Foteev made good gains in the chasing pack.

Vice Champion of Italy with Antonelli

In 60 Mini, the Italian Championship ended in Ugento. Alex Powell reached the podium in Race 1 and Andrea Kimi Antonelli went for a magnificent win in Race 2 at the wheel of his Energy Corse chassis. A result that earned him to finish vice champion of Italy 2018.

Results too in FIA Karting …

The big FIA Karting meetings in September also brought great satisfaction to many drivers who trusted the Energy Corse team. At the KZ World Championship in Genk (Belgium), the German Leon Kohler made a good comeback in the Final, before dropping back after a penalty for the spoiler. In the KZ2 International Super Cup, Emil Skaras was consistently among the fastest: 3rd in Qualifying, 4th after the heats with a win and a brilliant 6th in the Final with his Energy Corse-TM Racing. As for the Australian Joshua Fife, he was aiming a top 10 before retiring in the Final.

At the OK-Junior World Championship in Kristianstad (Sweden), Loris Cabirou won a coveted spot among the finalists after a great run in Qualifying.

And in October at Le Mans, the Energy chassis showed off at the IAME International Final. In X30 Mini, the Estonian Ruben Volt, the French Arthur Raphanel and Clément Outran did not fail to shine during the Final phase.