Bradshaw and CRG on the Podium of the IAME International Final 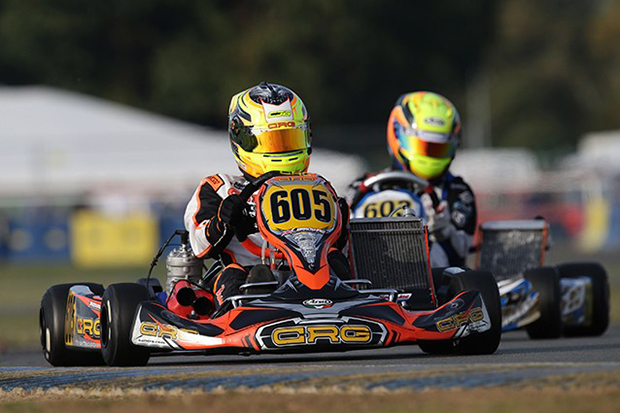 Callum Bradshaw has been among the contenders to the victory in the Iame International Final held in Le Mans, race that had 466 drivers at the start. He claimed the third step of the podium in Iame Super after dominating qualifying.

The British driver Callum Bradshaw has been shining for CRG at the “Iame International Final 2018” in Le Mans. He secured the third place in Iame Super after being the strongest in qualifying during a weekend that had a total of 466 drivers making it to the start.

Callum Bradshaw has been very quick in Iame Super since the beginning of the weekend in Le Mans as he posted the pole position being 0.1s faster than his closer rival. The CRG driver kept his momentum in the heats securing all four wins. Bradshaw won also the Prefinal leading it from lights to flag. At the start of the Final Bradshaw lost some ground, unfortunately, and closed lap one in P7, but he later on recovered up to P3, which rewarded his overall performance. Bradshaw certainly secured a positive result, but it did not match up the competitiveness shown during the weekend.

Among the other CRG drivers, Adam Putera had to settle for P20 in the Iame Junior’s Final, after P8 in Prefinal. Huang Xizheng was seventh in the Junior’s Final-B and Christian Ho was 26th due to a penalty. CRG secured another podium in Iame Master with the French driver Gerard Cavallon, who was second in the Final at the end of a good comeback race, while his fellow-countrymen Johan Renaux and Maxime Bidard were respectively fifth and seventh. The Spanish driver Alejandro Melendez Pardi ended tenth in Iame Mini. The Brit Philip Rawson was 11th in Iame Senior, while the two Finns of CRG Petteri Ruotsalainen and Mika Niskavaara were respectively ninth and tenth in Iame Shifter.

Complete results are available at http://www.iamekarting.com/home-x30-challenge-international/