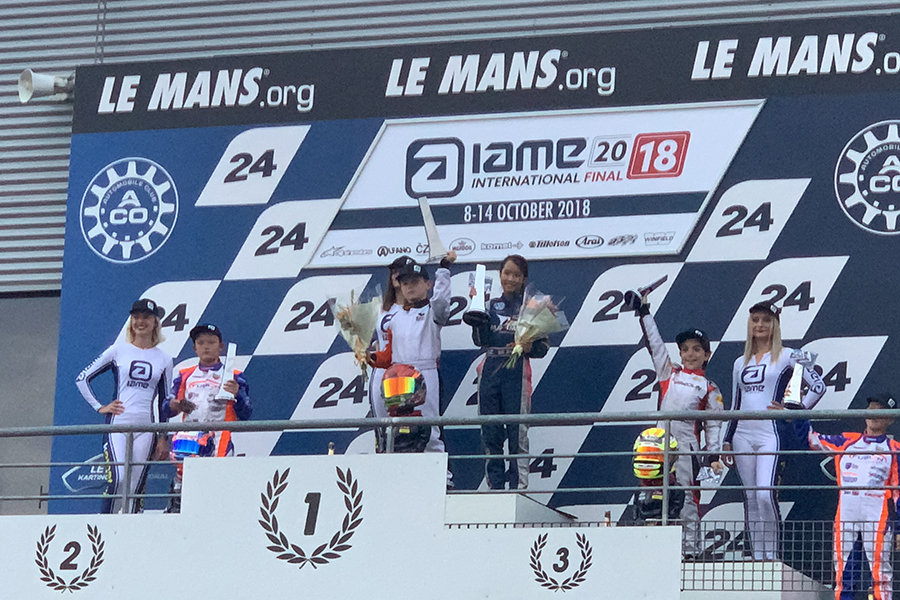 The 2018 IAME International Final completed on Sunday at the Le Mans Karting International circuit in France. A week long battle came to a close as the six champions were decided following the Prefinal and Final events, along with the B-Main and C-Main events for the remaining competitors who were not able to transfer to the big show. For the 12 drivers representing North America – along with SKUSA, USPKS, WKA, TPKC, and SSKC – it was a week of highs and lows. The final race of the day ended with the Red, White and Blue on display above the #1 spot on the podium thanks to defending race winner Brent Crews earning a second IAME Mini title. 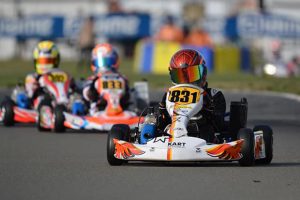 SKUSA Winter Series champion Brent Crews went perfect through the three heat races to earn the pole position for the Prefinal on Sunday. Crews jumped out to a solid lead but was caught late in the race. He would get shuffled back to fourth by the checkered flag. Starting on the outside of Row 2, Crews was left out through the opening corners and dropped down to 12th. An incident on lap two, just ahead of him, brought out a full course caution and grouped the field together for three laps. Crews restarted seventh and began working his way forward. Sunshine State Karting Challenge ticket winner Jeremy Fletcher restarted in the fourth spot after a great start from P9. Crews eventually caught him and passed him, as the two closed up on the two leaders. The top two drivers fought instead of working together, opening the door for Crews to take advantage. Crews moved into the second spot on lap 10, jumping to the lead in turn one after receiving the white flag. With two corners remaining, Crews left the door open just enough for Freddie Slater (GBR) to dive inside at the apex. As they made the long sweeping final corner, both drivers dove to the inside of the track heading to the checkered flag. Crews got enough of a run to slide alongside Slater, and the two drag raced to the line. By just seven thousandths of a second, Crews scored the victory, earning his second straight IAME International Final victory. When Crews moved into second, Fletcher attempted a move for third at the end of the long straight. He secured the spot but during the scramble to the next corner, another driver dove inside at the apex, pushing both drivers wide on the exit and slowed their progress. That allowed other drivers to take advantage. Fletcher fought strong on the final circuit, crossing the line seventh and earning one more spot after penalties. 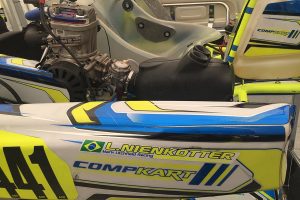 Up and down week in France for SKUSA champion Nienkotter (Photo: L. Nienkotter)

While Nienkotter was strong early on in the event, Sunday was not his day. After a solid warm-up, the SKUSA Pro Tour champion struggled for position in the Prefinal. Starting 10th, he lost nine spots by the end of the 14-lap run. The Final was a different, as Nienkotter found the speed and steadily climbed the order. After 20 laps, the Brazilian was ninth at the checkered flag, however, a pushback bumper penalty took him out of the top-10 finishing order. United States Pro Kart Series champion Laurentiu Mardan started the Final B in the 11th spot, needing to win in order to continue his day. Contact on the opening lap dropped him down to the tail of the field. 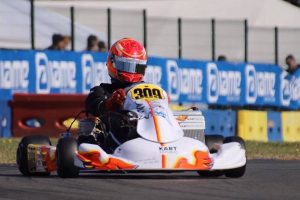 In the end, Jarsocrak did not better his result from 2017 (Photo: Josh Green)

The Final C was the first race up for the Senior class, which was suppose to include SKUSA Pro Tour champion Ryan Norberg. The Florida driver elected not to race to save his equipment after signing off a chassis earlier in the week. That left United States Pro Kart Series champion Brandon Jarsocrak and Texas ProKart Challenge champion Alejandro Jaramillo left for Team USA in the Final B. Jaramillo started 11th, but contact in the opening lap dropped him to the tail of the field, eventually retiring early. Jarsocrak gained 10 spots at the start to 17th, gaining one more spot by the checkered flag only to have a pushback bumper penalty to drop him out of the top-20. 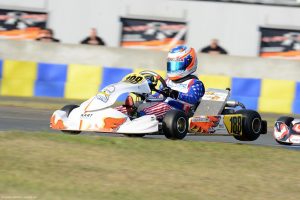 It was a tough run for Canadian Jason Leung in the Final B. After a clean first start, officials waved it off for another attempt. The second attempt was wild at the front, with Leung climbing the back of another kart and ending his day in the opening corner. United States Pro Kart Series champion Nicholas Terlecki started 33rd, and was able to pick up 13 spots on the opening circuit. Once he got into 14th, Terlecki had clear track and ran fast lap of the race to that point. He caught the next group and gained one more spot on the final lap. A pushback bumper penalty cost him five spots in the final order. Overall, a great performance from a removal in qualifying for having an onboard camera, losing half the session.