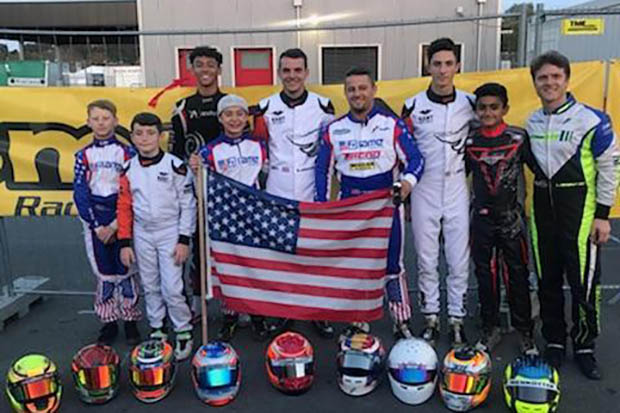 Saturday was decision day at the 2018 IAME International Final, as the final heat races of the event would take place at the Le Mans Karting International circuit in France. What began on Wednesday, all came down to earning the right amount of points to qualify into one of the top-33 positions for the Sunday Prefinals, or work your way through the B-main or C-mains.

Things did not pan out as hoped in the Senior category with five drivers taking part. Leading the way after the heat races is Texas ProKart Challenge champion Alejandro Jamaillo, who will start the B-Main from the 23rd position. United States Pro Kart Series two-time champion Brandon Jarsocrak did what he could to better his position for the B-main. He placed second in his final heat, only to lose seven spots for a pushback bumper penalty, ending up 27th on the grid for the B-Main. Three-time SKUSA Pro Tour champion Ryan Norberg did what he could after his qualifying misfortune, ending up P6 to start the C-Main. WKA ticket winner Josh Green and Florida driver Kai Palomino saw their events end with the final heat races.

While the previous heat races were improvements, the final two for Nicholas Terlecki were not. The United States Pro Kart Series suffered pushback bumper penalties in his final two heat races to lose five places in one, and five in the other, which nearly took him out of the B-Main and into the C-Main. Thus, he will start tomorrow’s second feature from the tail of the field. Canadian Jason Leung ended his heat races with two solid finishes, only to miss the A-Main by four positions. A win in the B-Main will move him into the big show, needing a solid race Sunday morning.

Defending race winner and SKUSA Winter Series champion Brent Crews has yet to relinquish the top spot after each session. After missing out on the overall top spot in qualifying by two hundredths, Crews has finished the remaining session in P1, including each warm-up session. With his third heat race win, Crews ended with a perfect zero to earn the pole position for the Prefinal on Sunday. Sunshine State Karting Challenge ticket winner Jeremy Fletcher continued moving forward, and will start the Prefinal from P9.

SKUSA Pro Tour champion Leonardo Nienkotter secured his best finish of the three heat races in the final moto, putting him on the outside of Row 5 for the start of the Prefinal. United States Pro Kart Series champion Laurentiu Mardan did not improve his spot in the final heat thanks to a pushback bumper penalty, missing out on the big show by 14 points.