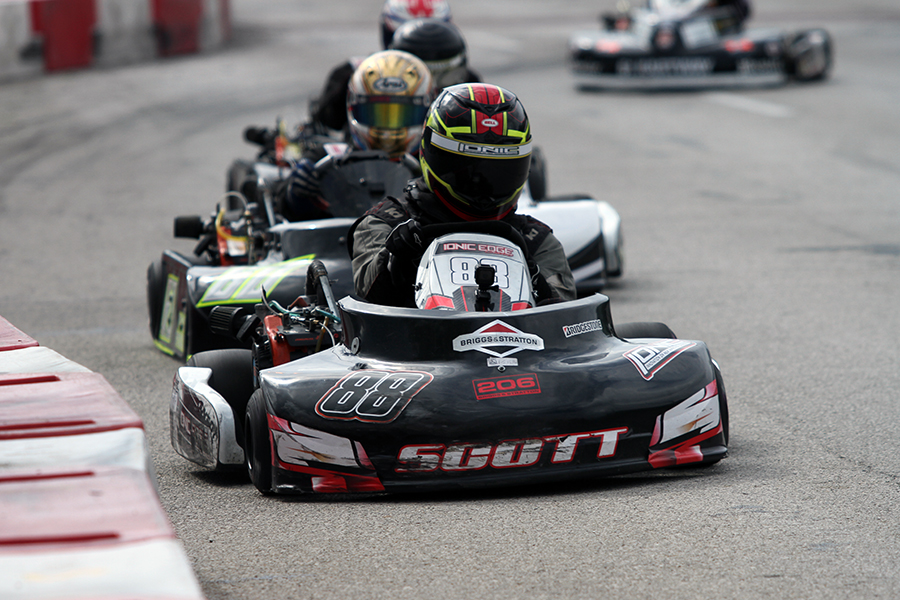 The Briggs & Stratton 206 engine made its debut at the Rock Island Grand Prix in 2012. Since then, the powerplant has been the backbone of the event each Labor Day as karts scream around the city streets of the Quad City area. The 2018 edition was the 24th time karters converged to Rock Island, Illinois to tackle the 6/10-mile course, with Briggs 206 making up 45% of the entries of the 295 total. 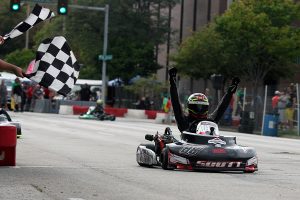 Since 2012, only three drivers have won the original category – Briggs Medium. Those drivers are Connor Lund (2012), Gary Lawson (2013) and Tony Neilson (2014-2017). If you add in the Briggs 206 Heavy divisions, it adds Cal Stewart to the list of drivers who have won. Lund, Lawson and Neilson have all won in the Heavy category as well. In total, from 2012 to 2017, those four drivers won the 14 main events in Briggs competition. Both Neilson and Stewart were competing in the Medium classes this year, with RIGP adding a second main event for the weight.

Among them trying to add their name to that list was Riley Scott. The 15-year-old from Quincy, Illinios was making his first start at the Rock Island Grand Prix, competing in all four divisions – Briggs 206 Medium, Briggs 206 Medium 2, Briggs 206 Heavy and Briggs 206 Heavy 2. Scott got his first big victory of the year winner at his hometown event, the Quincy Grand Prix. The Heavy main events took place first in the class order at RIGP, with Scott placing sixth and a DNF in the second class after getting involved in an early wreck.

Riley was more competitive in the Medium classes. Scott drove to the heat race win in Medium 1, trailed by his father Jeff Scott – another winner from Quincy Grand Prix. Riley ended Saturday with a great drive from the back of the 20-kart field in Medium 2, gridded at the back after a bad draw in the pea pick. Scott advanced up to eighth in 10 laps, running times similar to the leaders. 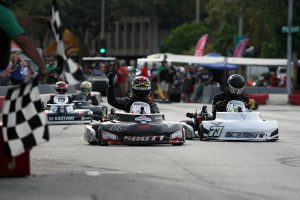 The second Rock for Riley came in a 1-2 finish with his dad Jeff in second (Photo: EKN)

Sunday, Scott was put back to fourth to begin the Medium 1 main event. His father led the first 10 laps and by the halfway point, Riley began working forward. Among those he passed was multi-time winner Cal Stewart. Lap 11, Riley took the lead from his dad with Stewart following him through for second. Riley used the clear track in front of him to drop his quickest laps of the race, and held off a charge from Stewart for his first Rock Island Grand Prix victory and the coveted Rock trophy.

The day was not done, with Medium 2 as his final race of the event. Riley started out the 15-lap main event trailing Neilson and Stewart. Let me remind you, these two drivers were the stars of the last three RIGP events. Showing no signs of being intimidated by the RIGP stars, Scott worked past Stewart first and then Neilson for the lead by lap six. At the same time, his father Jeff – who won his first Rock trophy in the Briggs 206 Masters class earlier in the day, followed him through. The son/father duo was hard to break up as they remained at the front to reach the checkered flag 1-2 – the first ever by a father/son tandem. The victory gave Riley his second Rock trophy of the event.

Scott finished the year with three podium finishes at the Cup Kart North America ‘North’ program, earning one victory in the CIK class. At the Grand Nationals 2 event at New Castle Motorsports Park, Riley was a DNF in CIK, while placing fifth in the Senior Medium division. 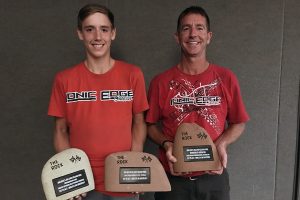 Riley with his two trophies and Jeff with his one (Photo: EKN)

Chassis: Ionic Edge
Engine/Engine Builder: Briggs 206 GT Machines / Dave Koehler
Sponsors: Scotties Fun Spot
Series You Compete In: Cup Karts North America, Quincy Grand Prix, Elkhart, Rock Island, and all the local tracks in our area
Years Karting: 8
How did you get started in karting? My dad grew up racing karts, my older sister raced when she was 5, after being at the track all the time with them, I told dad I wanted one of my own to race.
What has been the high point in your racing career? It would be a coin toss between, when I won the Quincy Grand Prix, to win an event like that in my home town was a great experience. But winning 2 “Rocks” is a big deal too.
What are your goals in racing? To race in Formula 1
In a few words, how would you describe your driving style? Safely aggressive and fast
Funniest moment at the race track? At a Route 66 race years ago, we were at my home track and it was the first time I had ever raced in the rain so every time I hit the Monza I looped it. Not just a couple of times but every lap. Even funnier when it was raining at Rock Island in hot laps, my dad referenced the Route race, so we kept the kart under the canopy until the sun came out.

What do you do when not at the track? I play hockey and football.
What are your goals outside of karting? To go pro in football.
What app or game do you play right now? Fortnite
What type of street car would you like to drive? 2018 Corvette
What are your pet peeves or things that irritate you? Someone telling someone to tell me something when their right in front of me.
What do you think could be done to improve the sport of karting? Local level racing on the Briggs platform is a great way to build the sport. Helping new karters! I can see where it would be frustrating to new karters so making friends with them, teaching them things we have learned over the years. If they have friends and get fast, they will stay in the sport longer.
What are your favorite aspects about the sport of karting? Making friends and seeing the checkered flag first.