Day two of the 2018 IAME International Final was impacted by rain. The Le Mans Karting International circuit in France began with a wet track, effecting the opening heat races for Senior. The track eventually dried until a strong storm system moved through the area during the second heat for Masters. It forced a red flag and postponement of two other heat races to leave the day incomplete. After Senior and Junior got qualfiying and the heat races going, the remaining four divisions set the qualifying fields and began the wheel-to-wheel competition.

Similar to yesterday, Team USA driver Ryan Norberg was caught by the weather change. His opening heat race, half the field went out on rain tires, the rest on slicks. The three-time SKUSA Pro Tour champion went slicks, and had an off in the opening lap. He continued on to post the quickest lap of the race, except finishing at the tail of the field. He rebounded in his second heat, setting up for more improvement tomorrow. United States Pro Kart Series two-time champion Brandon Jarsocrak left yesterday as the top driver from Team USA. Today was the opposite. A DNF in his first heat was followed by contact in the second after getting blocked while attempting a pass, putting him outside the top-15 in both. Texas ProKart Challenge champion Alejandro Jaramillo lost positions in both his heat races. WKA ticket winner Josh Green suffered contact in both heat races, while Kai Palomino has yet to get up to pace. Between the five drivers, there were seven pushback bumper penalties with Norberg the only one not to receive an infraction. 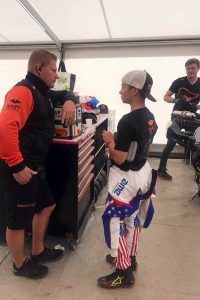 After a rough first day, United States Pro Kart Series champion Nicholas Terlecki bounced back in his one heat race on the day. Terlecki climbed his way up 13 positions to get into the top-15, building up momentum for Friday. Canadian Jason Leung was strong as well, improving his position in both heat races, with pushback bumper penalties moving him back further, still around the top-15. 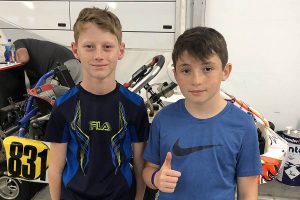 Fletcher and Crews are ‘thumbs up’ after the first day of action in Mini (Photo: IAME USA East)

The highlight of the day came in the Mini division thanks to defending race winner Brent Crews. The SKUSA Winter Series champion nearly had fast time in qualifying, missing it by two hundredths of a second at the end. The Team USA driver redeemed himself, securing the win in his opening heat race. Sunshine State Karting Challenge ticket winner Jeremy Fletcher bounced back from a struggle in qualifying. Fletcher used muscle and a quick kart to gain seven spots in his heat to finish inside the top-five. Canadian Yuchen Qiu continues to improve as the event moves on.

Thus far, SKUSA Pro Tour Master champion Leonardo Nienkotter has begun the event inside the top-five. The Brazilian was only able to get qualifying in as his heat race was called after the rain storm moved in and the track became unsafe for competition. His race will take place tomorrow in a revised schedule. United States Pro Kart Series champion Laurentiu Mardan is on the border to get into the main events on Sunday. Mardan did not improve his position in the first race, and will need to make big gains for a hope to qualify for the big show.