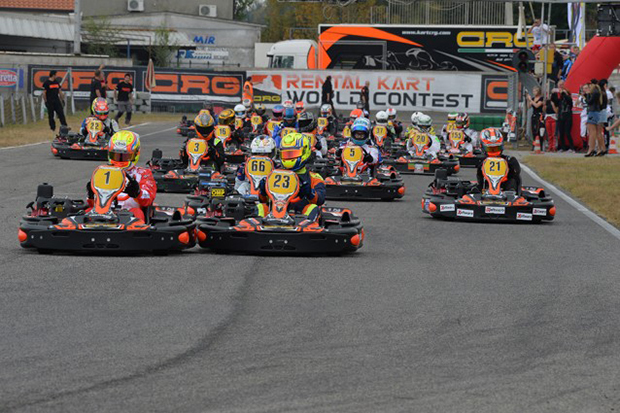 The Endurance meeting by CRG ended with a great success, as 30 teams coming from 10 different Nations gathered in Pomposa. The victory went to Red Enemy 1, the team made by Zipoli, Kanah and Santolini had in fact the best of the Danish ATR team Brask.

An atmosphere typical of great events welcomed in Pomposa 30 teams taking part in the Rental Kart World Contest 2018, the International Endurance meeting organized by CRG for teams selected on Endurance championships employing CRG karts all over the world.

The images of the Drivers Parade, the excitement of a Le Mans type start, strategies, pit stops and on-track duels on the edge of seconds will stay in the memory of all participants for a long time. The event met the unanimous consent of teams both in terms of organization and CRG Centurion Karts used for the race under the central technical assistance by CRG racing team. All these aspects contributed to place the CRG World Contest among the most prestigious International karting events.

Representatives from Mexico, China, Spain, Germany, Romania, Czech Republic, Swiss and Italy, including the winners of last year’s World Contest Red Enemy 1, made it to the track to challenge each other for the two titles up for grabs (i.e. the overall classification and Silver Cup for amateurs teams).

The reigning champion lineup made by Kanah, Zipoli and Santolini kicked off the 2018 event in the best possible way posting the pole position 0.076s clear of the Dane ATR Team Brask, that won the 24 Hours CRG Endurance of Adria. The third spot of the starting grid went to the Czech Republic’s team Steel Ring Gold, that proceeded Allianz, the Spanish team Gran Canaria Karting and Raceland Vicenza.

The race last 10 Hours with regulations open to several strategies: basically, the main rule was a minimum of 10 driver changes for the overall classification and 12 for the Silver Cup. The start of the race took place on a dry circuit soon after the spectacular Drivers Parade and the official picture on the starting grid. Red Enemy 1 took the lead of the race with ATR team Brask chasing them.

Heavy rain turned strategies upside down two hours into the race and driving stints got longer due to a lower fuel consumption, while several excursions changed a lot the classification. Team Allianz slipped out of the top ten in this phase, while Gran Canaria Karting installed themselves in P3 ahead of Steel Ring Gold, Lhasa, Raceland and the German team Arena of Speed Gold.

Rain stopped late in the afternoon and the classification did not change in the closing stages, as Red Enemy 1 with Zipoli, Santolini and Kanah took the win for the second year running with a one-lap advantage on ATR Team Brask, made by the Endurance specialists Paoleschi, Morin and Andersen. The third step of the podium went to Steel Ring Gold’s Polasek, Kurka, Matyas, Birgus, Mikula, Richter and Midrla, while the Italian team PKI was fourth with Mocchiutti, Riva and Turchetto exchanging behind the wheel. Raceland Vicenza secured the fifth place and was guided from the pits by CRG World Champion Paolo De Conto. The 6th place went to team DMS Motorsport of Stefano Perseghin, while the first of the two teams of the Arena of Speed German circuit was 7th. ATR V2 was 8th and led Lugano Karting Club 2 and Gran Canaria Karting.

The victory in Silver Cup went to the Italian Team BRT (Beretta Group) composed by Ledda, Montanari and Cavallini, that pipped the Arena of Speed Silver team made by Becker, Biering, Maushardt and Borne. The third place of the Silver classification went to team Allianz that proceeded Red Enemy 2 and Romania’s Webasto.

Edgard Kanah (team Winner – Red Enemy 1): “CRG karts have been great to drive and worked very well today also on the rain. We did not have any problem on our kart, which has been perfect in qualifying as well as in the race all the way to the flag. Organization has been great as always and it is a huge satisfaction to confirm team Red as the champions of such a prestigious event featuring several big names of endurance karting, like our rivals to the final win ATR Team Brask.”

Igor Ledda (team Winner Silver Cup – BRT): “Taking part in this International event has been an amazing experience. The event has been top class both in terms of organization and level of teams on track. Winning our category and being close to the top ten makes us very happy. It has been an hard-fought battle with Arena Of Speed and Allianz and the good thing is that we played our cards on track, with strategies and pushing hard in the driving stints, without technical issues affecting the end result of anybody. CRG deserves our huge compliments for the Karts they provided us with.”

Marco Angeletti (Marketing CRG): “This event ended with a great organization and technical success. A lot of drivers sent us their appreciation regarding organization of the event, the good atmosphere and the excellent services provided on track, but we are also delighted for the positive feedback that we keep receiving regarding the quality of the material and driving sensations provided by our karts. We put on a fantastic race with teams coming all the way from China, Mexico and several European countries, which placed this event among the most important International Endurance Races. From a technical standpoint, we we are very proud for the fact that all teams ended the race without technical issues and that the performance of our karts has been quite level. To us, this is a very important point of Endurance racing, as we do not like formats featuring a lot of kart changes, which would mean that karts do not provide a good enough performance equilibrium or reliability. The sporting activity of our Rental range is very important in our marketing strategy and, together with partner racetracks, we are defining very ambitious and interesting programs for all karting enthusiasts. We will introduce some interesting novelties for season 2019 within October.”

Complete results are available at: www.youcrono.it