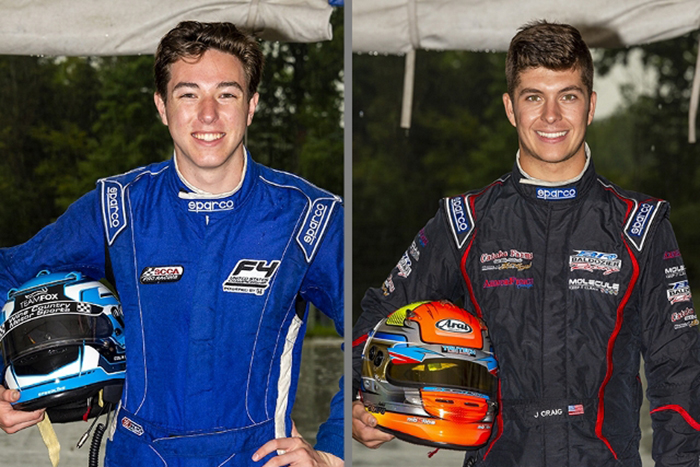 Colin Mullan, from Danville, Calif., and Jake Craig, from Mission Viejo, Calif., will carry the patriotic and distinctive Team USA Scholarship colors in a trio of Formula Ford race weekends in England beginning later this month. Braden Eves, from New Albany, Ohio, was initially selected as a Scholarship winner before requiring some surgery which will preclude him from accepting the opportunity.

Mullan, 16, began racing at age 5 in quarter midgets. He progressed through minicups (50 percent scale NASCAR stock cars) and karting before undertaking some testing and coaching in a Spec Miata in late 2016. After a first full season in the West Coast-based Formula Car Challenge, Mullan continued to shine this year in sports cars, driving an LAP Motorsports MINI JCW in the IMSA Continental Tire Sports Car Challenge. He also displayed his versatility during an impressive F1600 Championship Series debut at Summit Point Raceway in August with a pair of emphatic victories.

“Getting on track in some of the world’s most competitive open-wheel racing series will be an experience I’ll never forget,” said Mullan. “Races like the Formula Ford Festival and Walter Hayes Trophy teach so much about race craft and getting the most out of the car every session. Plus, with changing conditions and unpredictable UK weather, I’ll have to adapt my driving whenever we get on track.

“I’ve met so many amazing people through the scholarship process, just in the interviews at Mid-Ohio and the shootout alone. Also, having the opportunity to compete in the Mazda Road to Indy Shootout opens up so many new pathways that I never thought were possible for me. It’s hard to think my true journey with Team USA is about to begin.”

Craig, who will celebrate his 21st birthday later this month, also began racing at age 5, in karting. What started out as a fun outing with his family quickly developed into a career path. He displayed tremendous promise when invited to attend the Ferrari Driver Academy in conjunction with Prema Racing at Maranello, Italy, in 2014 – and again last fall when he received an invitation from eKartingNews.com to contest the Mazda Road to Indy USF2000 $200K Scholarship shootout – but it wasn’t until this year that he was able to focus on car racing. He impressed immediately by finishing second in the Canadian-based Toyo Tires F1600 Championship and F1600 Super Series.

“Getting selected for Team USA is a dream come true for me,” said Craig. “It’s basically the next step to further my racing career and it will be a great addition to my resume. Getting to race in England is going to be extremely beneficial. I’ll be able to continue to improve my race craft and technical understanding of a car. I’m getting about as much track time in a month as I’ve had all year!”

“It was a very strong group,” said Shaw. “Some variable weather conditions provided an extra challenge and it was impressive to see how well the youngsters coped. There might have been a few wheels straying off the road from time to time but nothing more than that. The quality was extremely high and the decision-making process was perhaps tougher than ever.

“It’s a shame that Braden won’t be able to take up the opportunity. The good news is that he is making good progress in his recuperation and I have no doubt he will be back, stronger than ever.”

Eves, 19, displayed his capabilities this season in the Formula 4 United States Championship powered by Honda, then, like Mullan, won two of the three races he contested in the F1600 Championship Series. He also made an impressive debut last month in the final rounds of the Cooper Tires USF2000 Championship Powered by Mazda at Portland International Raceway.

“The entire Team USA Scholarship process was one of the best experiences of my life,” related Eves. “I learned an astronomical amount from so many amazing people that contributed and helped out the scholarship. It was definitely one of the best feelings to be picked as one of the winners, and I was very disappointed to be unable to attend due to my recovery period from my surgeries overlapping with the time spent in England. I wish the best of luck to both Colin and Jake and would like to thank Jeremy Shaw, all the judges and everyone who helped out the scholarship at Mid-Ohio and Road America.”

Mullan and Craig will travel to England next week to join Cliff Dempsey Racing, which will be running the pair of Team USA Scholarship Ray Formula Ford cars for the 11th consecutive season. They will enter the final round of the BRSCC Avon Tires National Formula Ford Championship at Donington Park on October 13/14 in preparation for the following weekend’s Formula Ford Festival at Brands Hatch and the Walter Hayes Trophy at Silverstone on November 3/4.