CRG On the Podium of the 24 Hours of Le Mans 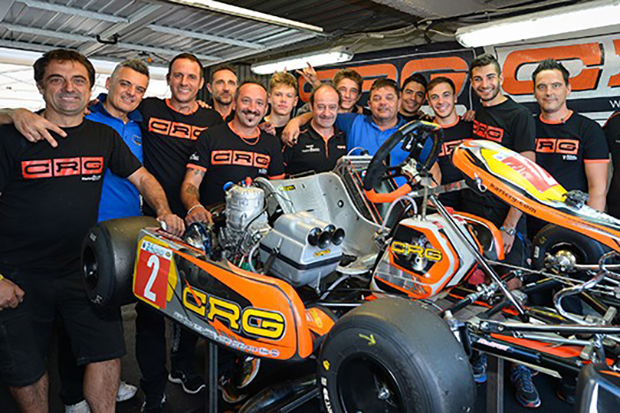 The dream team made by Paolo De Conto, Pedro Hiltbrand, Callum Bradshaw and Andrea Rosso secured the pole position and the third place in the race that named the winner of the FIA Karting Endurance Championship 2018.

CRG Racing Team has made it to the track in Le Mans for the 24H FIA Karting Endurance Championship aiming to bounce back from last year’s blow (when the victory vanished only in the closing stages for a few seconds), but despite an exceptional lineup made by drivers of the likes of World Champions De Conto and Hiltbrand, Bradshaw and Rosso, and very strong performances put in during all racing stages, some unlucky episodes prevented the Italian outfit to secure the victory.

The 24H Karting of Le Mans is a race valid for the FIA Karting Endurance Championship and CRG Racing Team took part in its highest class, that follows the International OK technical regulations. Regarding engines, the Italian team has benefited from the direct support of the Italian factory TM Racing. The long racing weekend kicked off in the best possible way for CRG, as its lineup put in very strong performances in free practice both in terms of single lap performance and race simulations. This supremacy was converted into the pole position in qualifying that was obtained by posting the quickest time in the four sessions, one by each driver, namely: Q1, Q2, Q3 and Q4.

The race started with Hiltbrand behind the wheel in the first stint and then continued with De Conto, Callum Bradshaw and Andrea Rosso exchanging driving duties every 45 minutes. Despite two little technical issues, the team always kept in the top 3 until sunset.

When the night was falling an engine problem caused a stop in the sector opposite the pit lane and a further problem to the axle ended up in an eight lap delay for the team. Despite an impressive race pace this gap was difficult to fill. The lineup secured nevertheless a great P3 that rewarded all the staff for their hard work and confirmed CRG on top of the most prestigious International Karting events.

Pedro Hiltbrand: “Le Mans is an incredible experience for a driver: it requires speed as the rhythm is always high, but at the same time the mechanical parts of the kart and tyres must not be stressed too much, which is quite hard to do since the setup is effectively a compromise among the needs of four drivers. This creates an exceptional bond with team mates, engineers and staff as the whole group works towards the same goal. CRG has been exceptional once again. We just needed that little bit more of luck, but I think that the speed and race management we had have been absolutely amazing.”

Glenn Keyaert (team Manager): “The 24H of Le Mans adheres to the International OK Regulations and it is an exceptional test-bench for the material. Every year we collect a lot of interesting data and we are happy on how fast we were, despite managing tyres, brakes and all the technical parts very well. Our drivers have been exceptional as our staff, including TM Racing’s personnel that provided us with the official support of the Factory regarding engines. We wanted to win and tried hard to do that, but two issues made us lose contact with our direct rivals, that were more lucky than us, as they experienced issues when close to the Pit Lane. We will have another go next year.”