Historic Double for SODI in the FIA Karting Endurance Championship 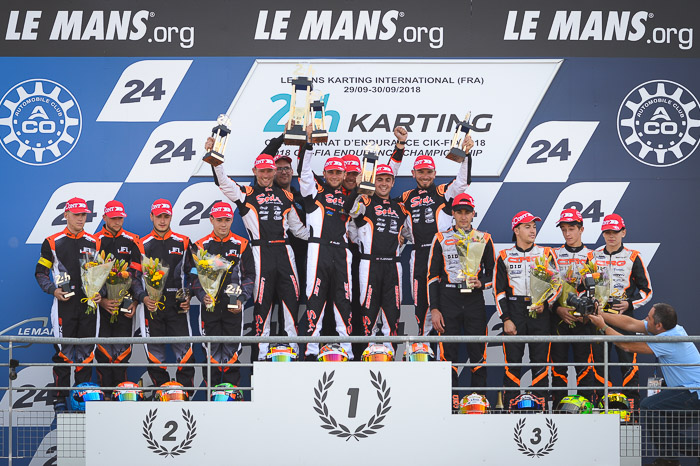 Sodikart is again part of the history of endurance karting after winning the 33rd edition of the 24 hours of Le Mans. It was the first time that an factory team from a major manufacturer has won the FIA Karting Endurance Championship since the first edition in 2016. The success of the French brand was completed by the presence of the JFJ Performance team and its Sodi chassis on the second step of the podium.

“Endurance is a very specialised discipline in kart racing,” said Bertrand Pignolet, Sodikart’s president. “We have taken a closer interest since the creation of the Endurance Championship by the CIK-FIA. Until 2016, Sarthe RTKF had carried the colours of Sodi to victory eight times in a row at the 24 hours. We had to face the challenge from other major manufacturers and I am very happy that we managed to impose ourselves this year, in our second participation, while achieving a double that reveals the quality of our products.

A specialist in endurance, Nicolas Scelles has been involved with Sodikart since the preparatory phase of the 2018 24 H Karting which began more than six months before the event. The Racing Team and other departments of the Nantes factory have worked extensively to adapt the equipment to the specificities of endurance before carrying out several tests on the track. The goal was to rationalise the adjustments to the kart during the race in order to lose the minimum of time during the pit stops and to anticipate any problems. Building on last year’s experience, the engine manufacturer TM Racing also sharpened its weapons to meet the challenge.

“A race of 24 hours and 2000 km is still a big challenge in karting,” explained Julien Dexmier, the team manager. “In sprint we are used to races of about 20 minutes. In endurance, the equipment constraints are very different. I think Sodikart has demonstrated once again its adaptability. The technical team and our driver training have been up to the job. The JFJ Performance team gave us a hard time and we shared their disappointment when they suffered a broken chain. In the end, Sodi won on all counts by achieving the double in the 24 H 2018 with the factory team on the top step and a private team in 2nd position.”

Anthony Abbasse, Alex Irlando, Tom Joyner and Bas Lammers completed a first-rate performance combining speed and reliability. The official No. 3 kart fought at the front of the race for the first five hours before encountering several breakages and mechanical problems that lost valuable time for the team. While JFJ Performance settled convincingly at the controls, the Sodikart team remained in ambush for a long time with the aim of preserving its full potential. When the opportunity came 1:30 from the finish, Sodikart grabbed the lead. The emotion was at its height when Abbasse passed the chequered flag as the winner after 1504 laps completed. With its Sodi chassis, JFJ Performance finished 2nd only one lap behind: an incredible performance.

Already crowned European Champion in KZ2 with Adrien Renaudin and the CPB Sport team, Sodikart achieved a another international victory in 2018 after these 24 Hours of Karting.