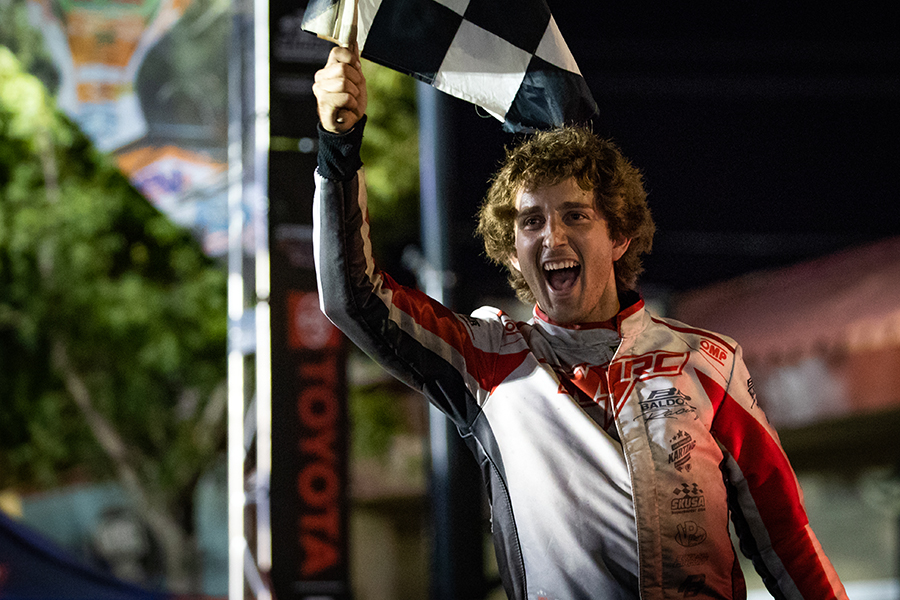 The 2018 Streets of Lancaster Grand Prix provided another exciting two days of street racing in southern California. For the 10th time, the City of Lancaster, California welcomed karters to compete on The BLVD with Superkarts! USA bringing the California ProKart Challenge to close out the 2018 season. Perfect weather conditions and a packed schedule of racing meant wire-to-wire action over the two days, deciding the 15 different winners for this year’s Streets of Lancaster GP.

The headline divisions made it a one-day affair, putting in two rounds of practice, qualifying, two heats and the main event all on Saturday. Going into Lancaster, two items hung over Billy Musgrave (Aluminos). The four-time California PKC champion had a perfect score in the 2018 championship chase, having already locked up his fifth title, looking to be the first to complete the season with maximum points in the S1 Pro Stock Honda category. The second, Musgrave had not yet earned a SOLGP victory in his career. Musgrave was quick out of the box, setting fast time in qualifying and winning both heat races to put him P1 on the grid for the main event. Musgrave grabbed the holeshot and was pressured early by east coast drivers Rory van der Steur (FA Kart) and Josh Lane (DR Kart). Eventually, Musgrave established a three-second advantage with fast laps of the race to complete the season sweep and earn his first career SOLGP victory. Rock Island Grand Prix King of the Streets winner van der Steur came up short in second with Lane holding on to the third spot. 2018 SKUSA Pro Tour champion AJ Myers, making his Mad Croc debut, ran fourth ahead of S1 rookie Jason Pettit (Aluminos). 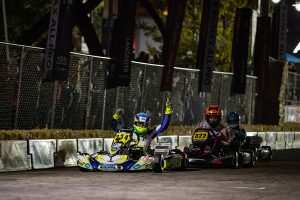 A second straight victory for Dante Yu under the lights in X30 Senior (Photo: DromoPhotos.com)

The second main event Saturday was the X30 Senior division where Dante Yu earned his second straight SOLGP win with a sweep of the 2018 edition. Yu (CompKart) set fast time in qualifying and was challenged in the heat races, coming away with both race wins. In the Final, Yu was joined at the front by Trey Brown (FA Kart) and Billy Musgrave (Mad Croc). Yu led the first 11 laps until Brown took over the point. Brown set the pace for four laps before Yu retained the position. Brown tried another attempt at the lead at the turn four hairpin, drifting wide to allow Yu and Musgrave to drive past for the top two spots. Musgrave was now in the challenger position, and on the final lap, got alongside Yu going into turn two. A yellow flag was waving and Musgrave let Yu back past on the exit, so not to receive a penalty. Yu held on to the checkered flag, earning a second straight SOLGP victory. Musgrave settled for second, where he finished one year ago. Brown joined them on the podium in the third spot, posting fast lap of the race. Jake Drew (Ricciardo) was up four spots to fourth with Nick Ramirez (Fullerton) following him through for fifth.

Running along with the S1 division was the S2 Semi-Pro Stock Honda under the lights. The day belonged to Zach Pettinicchi (Formula K). Last year, Pettinicchi was winning the S3 Novice victory at SOLGP. This year, he was battling the S1 drivers all day. Pettinicchi was the top driver in the S2 division all day, earning an inside row two starting position overall in the main event. Pettinicchi dropped to fourth overall, leading the S2 competitors through the 20 laps for his second career SOLGP victory, first in the category. Keawn Tandon (DR Kart) drove to second, coming back from a wreck in Heat #1, to finish second. Garrett McKelvie (Sodikart) joined them on the podium as he beat Blair Hosie (Aluminos) and Anthony Freese (Sodikart). 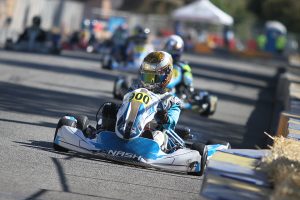 The largest race group of the Sunday main event action was the KA100 Senior/Master classes at over 20. The two categories were making their SOLGP debut, providing exciting moments. The main event started out with a red flag after one of the front runners made contact with the barriers on the exit of turn three. Others were collected and eventually the track was blocked, thus bringing out a red flag. Once restarted, Edward Portz (FA Kart) and Nick Ramirez (Fullerton) broke away from the field to decide the winner. Portz led most of the race, with Ramirez taking the spot with two laps remaining. The two went back and forth on the final lap, with Portz coming out of the hairpin with the lead. Ramirez tried to find a way past Portz, eventually bolting to the outside under braking. Going in deep, Ramirez was unable to hold on, making contact with the barriers as Portz escaped with the lead and the victory. Ryan Schartau (FA Kart), who started 21st after a penalty in Heat #2, charged his way up toward the front, slipping past in the final corner for second with Henry Morse (Ricciardo) and Mike Mantel (Tony Kart) going with him. Ramirez was able to continue, crossing the line fifth. Masters was dominated all weekend by Kevin Manning (FA Kart). Racing among the front runners in the Senior class, Manning ran an impressive 10th overall while winning the Master class. John Crow (Aluminos) joined him on the podium in second with Robert Perez (Fullerton) in third. 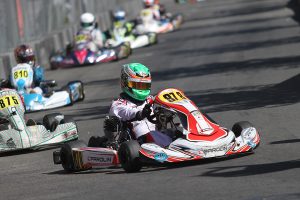 The KA100 Junior also made its SOLGP debut with a great battle. Involved were IKF Grand Nationals winner Oliver Calvo (Parolin), Aiden Kempf (Tony Kart) and Jonathan Portz (FA Kart). Kempf led the majority of the race until lap 15 when he opened the door going into turn three. Keeping wide, he made contact with the barriers on the exit, unable to continue. This allowed Calvo to grab the lead, holding on to the checkered flag for the inaugural victory. Portz crossed the line second, but was penalized two positions for blocking. This put Steven Grafton (Fullerton) on the podium in second and Lanie Benjamin (Fullerton) in third, climbing up from seventh on the grid. Portz ended up fourth with Ethan Lampe (Gold) in fifth.

Calvo had a chance at a second victory on the day in the X30 Junior class. The two-time defending race winner was in the lead group with fellow Parolin driver Alan Tang, Jonathan Portz (FA Kart) and Jace Denmark-Gessel (Tony Kart). Portz and JDG were able to pull away mid-way through, however, were caught back up by Calvo and Tang in the closing laps. Calvo moved into second late, and then challenge Portz on the final circuit. As they came to the final corner after the long 1000-foot straightaway, Calvo dove inside of Portz, slapping the barriers into a spot about 56 inches wide between Portz and wall as they entered the braking zone. Calvo went as deep as he could, unable to get the kart to hook up and turn, pushing straight into the barriers on the outside of turn five. Portz slipped by and reached the checkered flag first for the victory. JDG nearly got him at the line after the excitement in the final corner, coming up 81 thousandths short. Tang completed the podium with Dustin Salaverria (FA Kart) in fourth and Blake Nash (FA Kart) completing the top-five. 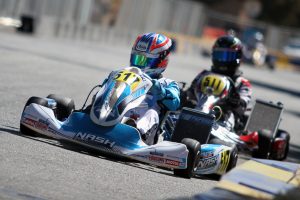 It was a near sweep for Matt Johnson in the X30 Master class. Carlos Calderon (Aluminos) grabbed the top spot in qualifying with Johnson (FA Kart) in third behind former winner Erik Jackson (VemmeKart). Johnson went on to win both heat races with Calderon right there. It was the same in the Final, with Calderon putting down fast lap of the race, only to see Johnson lay down consistent laps toward the end to pull away to a 1.9-second advantage. Jackson won the battle for third over Nick de Graaf (Kosmic) with Vatche Tatikian (Ricciardo) coming from a Heat 2 crash to finish fifth. In the same race group was the X30 Super Master class, as 69-year-old Stu Hayner (Gold) showed that age is just a number. He was able to work past Robert Switzler (Redspeed) and score the victory. Jon Persing (FA Kart) was third on the podium.

Nick George appeared to have the S4 Master Stock Honda field covered on the weekend. The Aluminos driver had the sweep in tact as they got through qualifying and the two heat races. George led the Final with Robert Marks (CRG) and Rob Logan (CRG) right on his bumper, putting the pressure on. A slight error on the exit of turn three put George’s left rear into the barriers enough to bend the axle, ending his day. This handed the lead to Marks, who now was pressured by Logan, a four-time winner of the SOLGP including one win from the inaugural event in 2009. Marks would be able to hold on to the checkered flag, scoring his first Lancaster GP victory with Logan in second, earning fast lap of the race. Mike Mantel (Aluminos) ran third while Vivek Tandon (DR Kart) and Peter Abba (DR Kart) completed the top-five. John Crow (Aluminos) was able to claim his first SOLGP victory, winning the S4 Super Master Stock Honda class. Crow ended up fourth overall, getting pressured late by former winner Patrick O’Neill (CRG), placing sixth overall. Jim Kidd (Aluminos) completed the podium, charging back from a flat tire in Heat 2 to end up ninth overall in the 19-driver field. 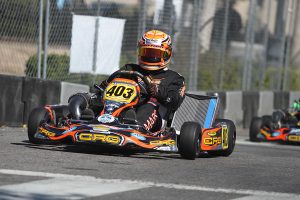 Emon Fazlollahi (Praga) was able to come away with the victory in the S3 Novice division. Emon was racing against Eddie Tafoya (Aluminos) until he retired early in Heat 2. Fazlollahi then went on to drive away in the Final by nine seconds for the victory. Tafoya worked his way up to second, but was penalized for passing under yellow, moving Dustin Kudela (Sodikart) to second with Kyle Loh (Aluminos) promoted to third. Jacopo Pizzinato (Aluminos) came away with the victory in the S5 Junior Stock Honda division. He was challenged in the Final by Cash Baxley (CRG) and Connor Robles (Aluminos). Pizzinato was able to reach the checkered flag first while Robles went off into the barriers in the final corner, with Baxley receiving a penalty for the contact. That promoted Logan Meyer (Birel ART) to second with Robles in third after ending the race in the barriers.

It appeared to be a sweep in the Mini Swift division with Kai Sorensen at the front all day. Sorensen was challenged by Mathias Coito (Mad Croc) in the Final, eventually getting away to a clean run at the checkered flag. In tech, Sorensen was removed for a technical issue, thus promoting Coito to the victory. Enzo Deligny (Benik) and AJ Zarcone (Nitro Kart) completed the podium with Ryan Persing (Benik) and Logan Toke (Top Kart) completing the top-five. 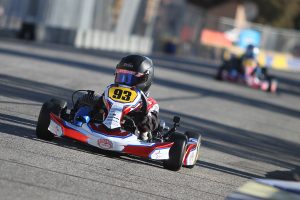 The weekend belonged to eight-year-old John Antonino in the Micro Swift division. Antonino would lead all the sessions, driving away to a five-second advantage for the victory. The fight on the track was for second with Logan Chambers (Benik) winning the battle over Graham Trammell (Energy) with Caden Chrisman (CompKart) and Kane Martin (Tony Kart) completing the top-five.

The weekend ended with the podium ceremonies in turn five, with the fans and everyone from the paddock surrounding the stage. After the awards were handed out, the City of Lancaster and Superkarts! USA awarded the Streets of Lancaster Grand Prix Scholarship for the 2019 season. The recipient was S4 Super Master driver John Crow, who won the $15,000 prize toward his racing season with SKUSA. An emotional Crow stated the Streets of Lancaster was his favorite event after winning earlier in the day, and the SKUSA staff consider him a great ambassador for the sport of karting.