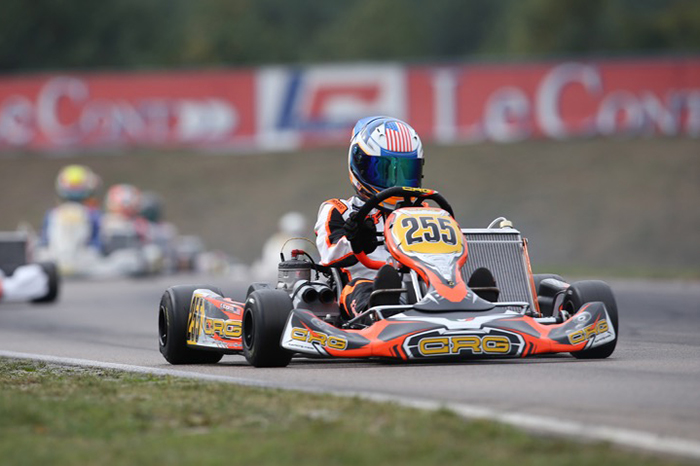 Taking on some of the best junior drivers from around the world, Scionti secured an impressive 14th place finish (Photo: Cuna Photo)

Competing at the CIK / FIA World Junior Karting Championships this past weekend, CRG / TM driver Enzo Scionti was the only American to transfer through to the final. Taking on some of the best junior drivers from around the world, Scionti secured an impressive 14th place finish in the 113 driver strong OK Junior category in some challenging weather conditions.

From his home in the state of Texas to the challenging circuit in Kristianstad, Sweden, Scionti was a man on a mission and secured the third position in his qualifying group and 11th overall. A stout field of 113 drivers made a qualifying attempt and to be in the top-20 is a feat in itself. Missing the European Championship and some other high profile events, the CRG team was ecstatic with his results.

Continuing throughout the weekend, Scionti started each of his heat races from the second row and looked to maintain, if not improve his position. Showing his consistent driving abilities, Scionti battled in the top-five in all six of his heat races and finished fourth, fifth, sixth, eighth, 13th after receiving a ten second penalty post race and third in the final heat race.

“I had heat races in both the wet and the dry,” explained Scionti. “The competition is tough here and I was very happy with my results. A direct transfer to the final was a goal of mine and I can’t thank the CRG team enough for their hard work and efforts. I will start the main event in 14th.”

In the final, the young driver was the only American in the field. Driving forward and battling inside the top-ten, Scionti had contact that sent him off the racing surface and down the running order. Able to get back on track and lose only four positions, he continued to battle hard and crossed the stripe with an impressive 14th place result.

“Enzo missed the European Championship and because of this has done much less than his rivals,” explained a member from the CRG program. “Despite everything, he was very impressive while not making mistakes.”

Enzo Scionti will enjoy a little time off before he returns to competition in Italy for the WSK Final Cup. Taking place over the October 18-21 weekend at the South Garda Karting Circuit, the American hopeful will look to continue his momentum.