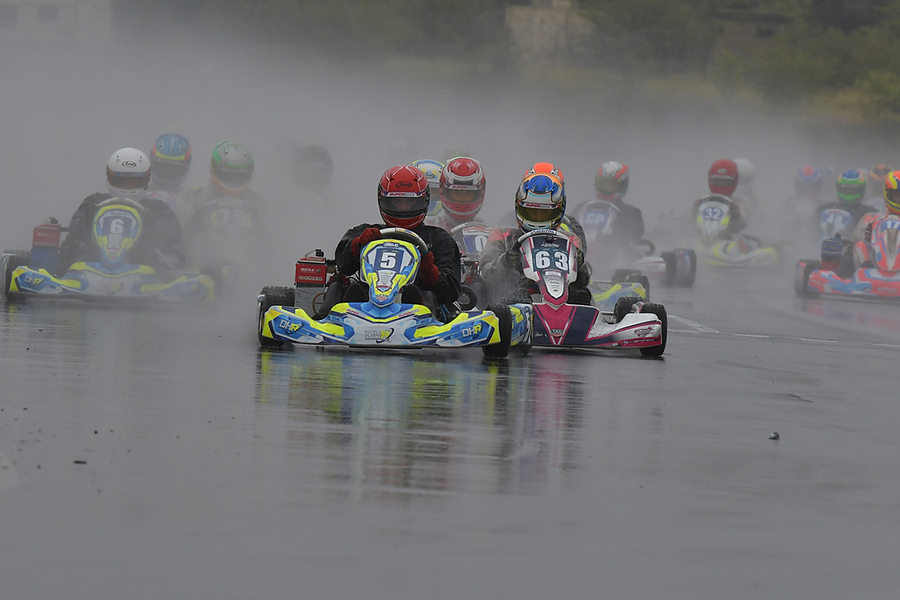 The country’s longest running karting series, the Tuto Super One, reached the height of the season last weekend at the legendary Cotswold circuit of Rissington. Both competitors and the series and circuit teams worked hard this weekend in difficult weather conditions with rain on Saturday and Sunday, with not a single red flag interruption.

Louis Large is celebrating becoming the first Super One Champion of the year, winning Rotax 177 by two points from Chris Thomas in their final round.

The TKM drivers have two more rounds, at Glan-Y-Gors in North Wales on 8th-9th September and PF International in Lincolnshire at the end of the month, while the Honda Cadet and most of the Rotax Max classes only have the PF International round remaining.

As always with Cadets, Qualifying was tight with Daniel Guinchard 0.02s ahead of Theo Micouris and 0.08s ahead of Harley Haughton. However, Oliver Greenall won both his heats, with the other going to Kean Nakamura-Berta after some lively racing. Alfie Rigby was 2nd on the Final 1 grid with two 2nd places and Guinchard 3rd with two 3rds.

Final 1 on Sunday afternoon was wet and Micouris jumped into the lead early on before Greenall repassed at half distance, gradually pulling away from Micouris and the rest of the pack. Rigby was also on his own in 3rd with no threats from Sonny Smith in 4th who was overtaken by Edward Pearson at the end.

Guinchard had dropped back in Final 1 but in the also-wet Final 2 he stormed back up 11 places to win ahead of Smith. Greenall was the early leader before a battle with Guinchard and Micouris, then Guinchard made it stick a couple of laps from the end. Alfie Rigby has retained the Championship lead and is eight points ahead of Guinchard when dropped scores are taken into account.

The top five were within a tenth in Minimax Qualifying with Sam Gornall on top ahead of Max Edmundson. Myles Barthorpe and Marcus Littlewood won the two heats but as they each had less successful other heats Brodie Trayhorn took pole for Final 1 with a 2nd and 3rd.

Final 1 saw Trayhorn lead from start to finish, consistently ahead of Edmundson and Littlewood who had made up places at the start. Littlewood made the jump at the start of Final 2 and led throughout but never managed to shake off Trayhorn although they both pulled away from Tristan Rennie. Barthorpe now leads the Championship by 14 points from Trayhorn on dropped scores.

Spencer Stevenson took pole in Qualifying, 0.7s ahead of Championship leader Abbi Pulling and 0.18s ahead of Louis Harvey. He went on to win both heats, one on Saturday evening and one on Sunday morning which was wet. Pulling was 5th and 2nd to finish the heats on equal points with Harvey (3rd and 4th) but she was 2nd on the grid due to her higher Qualifying.

Stevenson took the win in the wet Final 1, leading all the way to finish a tenth ahead of guest driver Reggie Duhy, after Pulling dropped back slightly at the start and didn’t recover for a lead challenge. Louis Harvey was 3rd and 2 seconds back.

Duhy won the drying Final 2 by 2 seconds from early leader Stevenson, gradually pulling away while Pulling came in 3rd another 2 seconds behind. With two rounds to go, Pulling is 33 points ahead of Butterworth on dropped scores.

Another close Qualifying saw Kai Hunter a hundredth ahead of Harry Newman-Oakley and while Hunter stayed ahead after the heats Newman-Oakley had an early DNF in the first and dropped down the field allowing Guy Cunnington to take 2nd and Oakley Pryer 3rd.

Hunter led from lights to flag in the wet Final 1 but with Pryer reeling him in after he passed Cunnington in the early stages. Pryer finished 4 tenths behind with a further big gap to Lowther.

Final 2 was also wet and Pryer took the early lead as Hunter dropped to 4th, but after less than a lap Lowther took control and was to stay there for the rest of the race with Pryer again closing up towards the end. Lowther now leads the Championship by three points from Cunnington on dropped scores.

In Qualifying Adam Sparrow took pole ahead of the 38 drivers in a dead heat with Gavin Pitt and James Pashley 3rd a tenth back. However, Pitt was on pole for Final 1 after a 2nd and 3rd in the heats, with wins going to Sparrow, Joseph Reeves-Smith and Chris Whitton.

Pete Newman won Final 1 in the wet after pressuring Pitt throughout the race, then passing on the last lap. Reeves-Smith took 3rd in the early stages and stayed over a second behind Newman. Robert Welham gained 18 places to 4th but was 8 seconds behind the leaders.

In Final 2 Newman held the lead for half the race before he was forced to retire with a mechanical problem, with Kyle Sproat taking over control to win ahead of Welham and Reeves-Smith. With two rounds to go, Reeves-Smith has a 28 point lead over Welham on dropped scores.

Senior Max was the biggest class of the day with 54 entries and Tommy Foster took pole just ahead of Rhys Hunter and Bradley Barrett. Foster and Hunter won two heats each to put Foster on pole for Final 1 while Charlie Turner was 5th.

Turner made the best start in Final 1 which was wet, and led ahead of Barrett for the entire race, gradually pulling away. Morgan Rose was 3rd for most of the race but was penalised which gave the place to Hunter.

It was the same story in Final 2, again wet, with a dominant win for Turner ahead of Barrett who overcame Hunter early on with Ben Davis moving up to 3rd. With a round to go, Turner leads Hunter in the Championship by six points on dropped scores.

Chris Thomas qualified fastest against Alexander Luck and Louis Large and went on to win both heats with Luck taking 2nd and Daniel Martin 3rd each time.

In Final 1 Thomas was the early leader but despite dropping back at the start, Martin reeled him back in to take the lead after a few minutes and continue to pull away to the chequered flag on the wet track.

Martin led from lights to flag in Final 2, while Jamie Dzyra moved up from 5th on the grid to 2nd. Dzyra could do nothing about Martin though, and he again pulled away throughout the race to win by over 10 seconds.