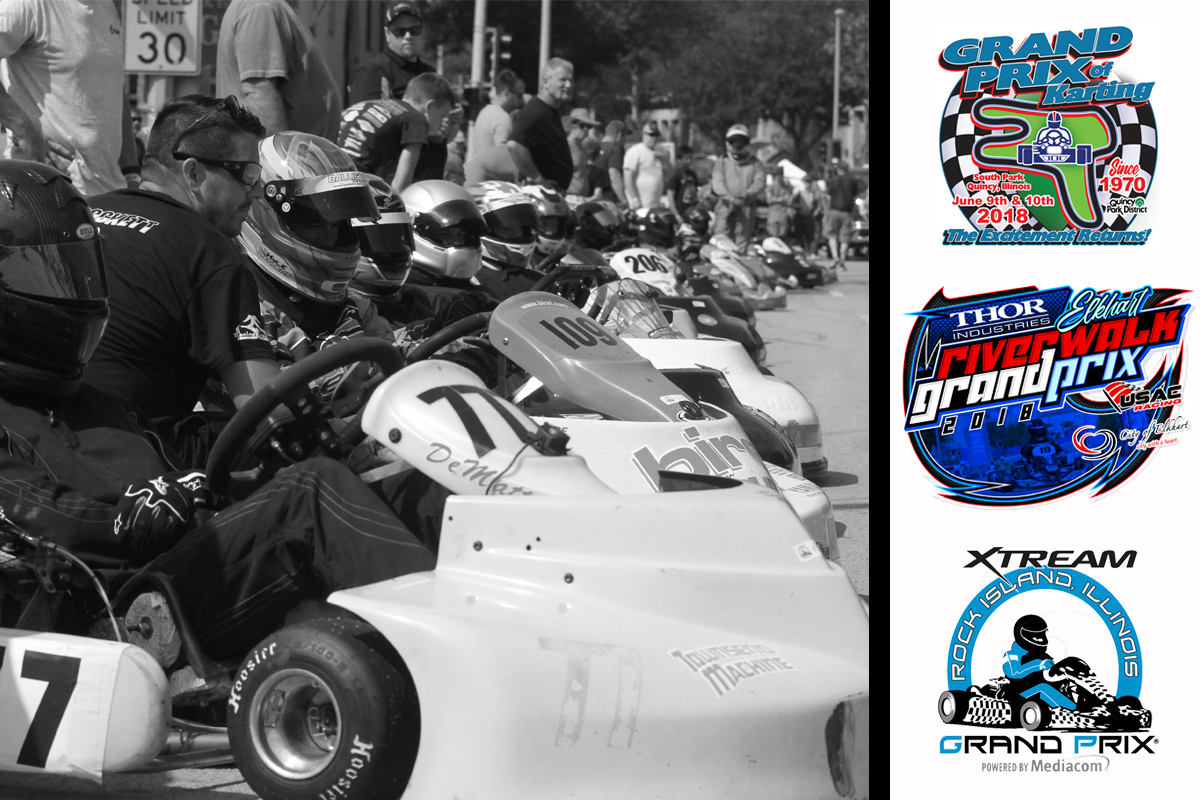 With two rounds of action complete, the battle is tight in the first Triple Crown of Karting as competitors prepare for the final round of action at the Xtream Rock Island Grand Prix powered by Mediacom on Labor Day Weekend in Rock Island, Ill.

Previous rounds of the Triple Crown were run at the Quincy (Ill.) Grand Prix of Karting, the Battle at the Brickyard at the Indianapolis Motor Speedway and the Thor Industries Elkhart (Ind.)  Riverwalk Grand Prix.

After the first two rounds in the Ignite Senior Triple Crown competition, Texan Jeff Dolian holds a narrow 3 point lead over Keith Scharf of St. Louis with Bermuda’s Scott “Skitchy” Barnes in third. Only 8 points separate the entire field heading into the finals at Rock Island.

The Yamaha Heavy Triple Crown competition is led by karting veterans Michael Dittmer of Davenport, Iowa with 10 points and Bowen, Ill. racer Todd Bolton with 8 after both notched top finishes among Triple Crown racers in the first two rounds. But Neilson is just behind with 7 points followed by Iowan Morgan Schuler with 4 points heading into the final race at Rock Island, which all of the drivers know quite well.

In the 125cc Open Shifter class, Joe Ruch has built a commanding lead with 12 points after being the top Triple Crown finisher at both Quincy and Elkhart. Indiana’s Alex Conlin and Devon Smith-Harden, Bermuda’s Barnes and others will be battling for second and third as long as Ruch can get the 1 point at Rock Island awarded for starting the race.

In order to participate, racers must have signed up for the series and paid a one-time $50 series fee in addition to regular entry fees. All money will be returned to competitors through trophies and awards.

Each event runs its own rules, weights, spec tires, prizes, etc. and assigns Triple Crown points. For example, you could finish in fifth place at one of the races competing against non-Triple Crown competitors, but still win first place points for finishing ahead of others participating in the three-race series. Triple Crown awards will be presented at the Awards Ceremony at Rock Island, Sunday, Sept. 2. First, second and third place trophies will be awarded along with cash prizes to all first-place winners based on the number of Triple Crown entries in their class.

The return of Elkhart in 2017 and Quincy South Park this year restored two of the more historic races in the sport. Coupled with the Rock Island, which continues well into its third decade, the races represent 65 years of karting history.