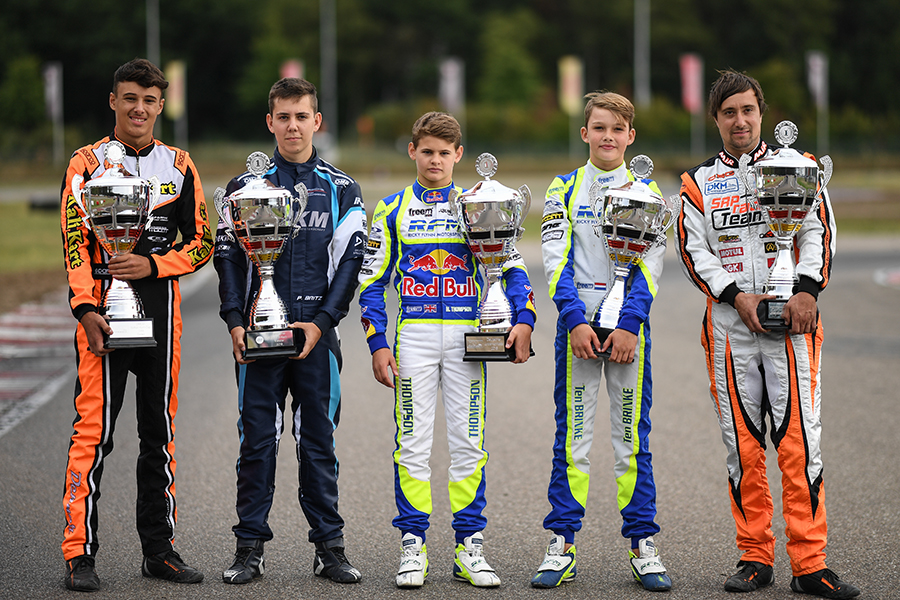 The title decisions in the German Kart Championship have been made: Last weekend 184 drivers from more than 20 nations started in Belgian Genk and drove thrilling races until the end. The new champions on Sunday evening were Harry Thompson (DKM), Thomas Ten Brinke (DJKM), Fabian Federer (DSKM) and Emilien Denner (DSKC).The final decisions of the German Electric Kart Championship were also made.

The weather on Saturday provided some variety. Temporary rain showers made it difficult for the drivers and teams to find the right setup. The sun was shining again for the finals on Sunday and the kart racing conditions were great.

Six DEKM races within the framework

In addition to the decisions in the DKM and its grade series, the first champion of the German Electric Kart Championship was also to be chosen. The 19 drivers completed six races overall. On Sunday evening, Philipp Britz from Saarbrücken was the overall winner of the premiere season. In addition to a top-class cup, Britz can also rejoice about being received in a training program by Porsche Motorsport as well as getting an invitation to introduce himself at the German Post Speed Academy.

On the 9th of September at 1pm, the German automobile-, engine- and motorsports channel MOTORVISION TV is going to broadcast the highlights of the final weekend in Genk. In the 30-minute-long magazine, the best scenes are going to be summed up and the winners give interviews.

Emilien Denner (CRG Holland) already had the chance of winning the championship at the DMSB Shifterkart Cup prematurely in Kerpen. But a double falling out postponed the decision to Genk. This time, the driver from France didn’t leave a shadow of a doubt though. He already secured pole position during qualifying and built on this during the following heats and races. With a clear double victory, he won the championship and was happy about winning the title in the evening: “After my bad luck in Kerpen, this weekend went really well. We were very fast from beginning to end and didn’t risk much. I’d like to thank my team for their great support.”

In the first final race, the positions behind Denner were taken quickly as well. Youngster Davids Trefilovs (SRP Racing Team) defended second place in front of Alessio Curto (Valier Motorsport). Pawel Myszkier (Mach1 Motorsport) fought his way to the great fourth place, followed by Thomas Neumann (RS Motorsport). Due to a perfect start, Trefilovs took the lead in the second race – Denner overtook him again during the first half of the race though. The CRG-rookie stayed in his wind shadow though but then had to drop out one lap before the end of the race. Thereby, Curto inherited second place in front of Kreutz, Myszkier and Christopher Dreyspring (CRG Performance).

The title favorites of the German Shifterkart Championship kept things exciting until the very end. Fabian Federer (SRP Racing Team) and the two brothers Jorrit and Stan Pex (both CRG Holland) fought for the title. After the heats, the Pex-brothers had the best initial position by coming in first and second. Federer didn’t experience a perfect Saturday and only came in tenth. In the finals, the cards were dealt anew though. The younger Pex-protégé led the first ranked race, but he fell back a little towards the middle of the race. His brother Jorrit took the lead and won in front of local driver Rick Dreezen (TB Racing Team). Stan came in third in front of guest drivers Bas Lammers (Alpha Karting) and Jonathan Thonon (Birel Art Racing KSW). Federer gained some ground again and collected important championship points on sixth place.

The crucial final race started with a bang. One of the favorites, Stan Pex, already had to drop out of the race during the starting phase and thereby lost all chances of winning the title. Jorrit showed a great performance at the front of the field though and achieved a double victory. It wasn’t enough to win his seventh championship title in the end though, even though it got really exciting once again during the last lap. There was a small collision between Martijn van Leeuwen (TB Racing Team) and Federer, which led to both of them losing some ground. Van Leeuwen received a time penalty for this afterwards and therefore only ended up on ninth place. Alexander Schmitz (Renda Motorsport) was the new second winner in front of Federer. Dreezen and Emil Skäras (Energy Corse) followed on the further ranks. Despite the small setback it was enough for Federer to win his first DSKM-title in the end: “I’ve been participating in the DKM for many years and I’m really happy to have won the championship now. After crossing the finish line I wasn’t sure if it was enough and I’m even happier now”, rejoiced the South Tyrolean in his champion’s interview.

Dutchman Thomas Ten Brinke (Ricky Flynn Motorsport) rose like a phoenix from the ashes in the fight for the junior title. The youngster travelled to Genk on fourth place and led the championship after the heats. From pole position, he drove away from the rest of the field during the first final race and celebrated his first victory in the DJKM. His strongest opponent was Ben Dörr (TB Racing Team). The fastest German of the field lost some ground during the starting phase, but fought his way forward again and closed the gap to the leading driver from the Netherlands at the end of the race. He wasn’t able to attack anymore though, but still collected important championship points on second place. Zak O’sullivan (Ricky Flynn Motorsport) showed a strong catching-up race – the league leader fought his way forward from thirteenth to third place and thereby ended up on the winners’ podium. Joshua Rattican (Msport Karting) came in fourth in front of US-American Enzo Scionti (CRG Holland).

After his kick-off success, Ten Brinke managed a repeat at the last ranked race of the season as well and thereby gained the championship title. “Unbelievable, I travelled here and didn’t really think I’d have any chance of winning the title and now I’m up here. It’s a great feeling”, the youngster commented on his success. His direct title opponents O’sullivan and Kay Askey (Ricky Flynn Motorsport) didn’t drive good races and missed placing among the top ten – even though O’sullivan led the race in the beginning. German Dörr came in second again in front of Conrad Laursen (Ricky Flynn Motorsport), Rattican and Sebastian Ogaard (TK Racing).

Championship favorite Harry Thompson (Ricky Flynn Motorsport) achieved the best start into the final weekend. The youngster of the Red Bull junior team led the field after the heats and immediately used his top position during the first final race. He achieved a considerable advance with his team mate Zane Maloney (Ricky Flynn Motorsport) – but this didn’t last long. The opponents got close again and caused thrilling fights until the end of the race. With Thompson, Maloney, Leonardo Anderrüti (Lanari Racing Team) and Hadrien David (Kosmic Racing Department), four different drivers led the field during the course of the 19 laps. During the last third of the race, Frenchman David came out on top though and celebrated his first DKM victory. The pursuers were really closely together. Unlucky driver of the last lap was Anderrüti: The Swiss fell back from second to sixth place. The cup ranks were completed by Maloney, Thompson, Sasse and Bastian Buus (RS Competition). Sasse experienced a setback afterwards too though. Due to a time penalty he fell back to tenth place, which prematurely made Thompson the champion.

In the last race of the year, the new champion Thompson took the lead right at the start and didn’t give his opponents any chance of attacking him during the course of the 19 laps. At the finish line he had a huge reason to rejoice then: “This wasn’t an easy weekend for us, I drove on this track for the first time. Things went according to plan in the end though and I’m proud of winning.” Behind the young Brit, Nicklas Nielsen (Schumacher Racing Team) fought his way to second place. Another driver from Denmark, Buus, came in third. Kas Haverkoort continued his catching-up race of the first race and only barely missed placing on the podium by coming in fourth. Kick-off winner David came in fifth.

After the thrilling final, series coordinator Stefan Wagner also summed things up positively: „First, I’d like to thank all drivers, teams, helpers and spectators for their support during this season. You can only successfully run a series like this if everything and everyone works together positively in the end. We’re very content; there were narrow decisions and fair fights in all four classes until the end. The numbers of participants were on a high level at all five races and are a confirmation of our work. Now we’re taking a winter break and are already working on the 2019 season.”