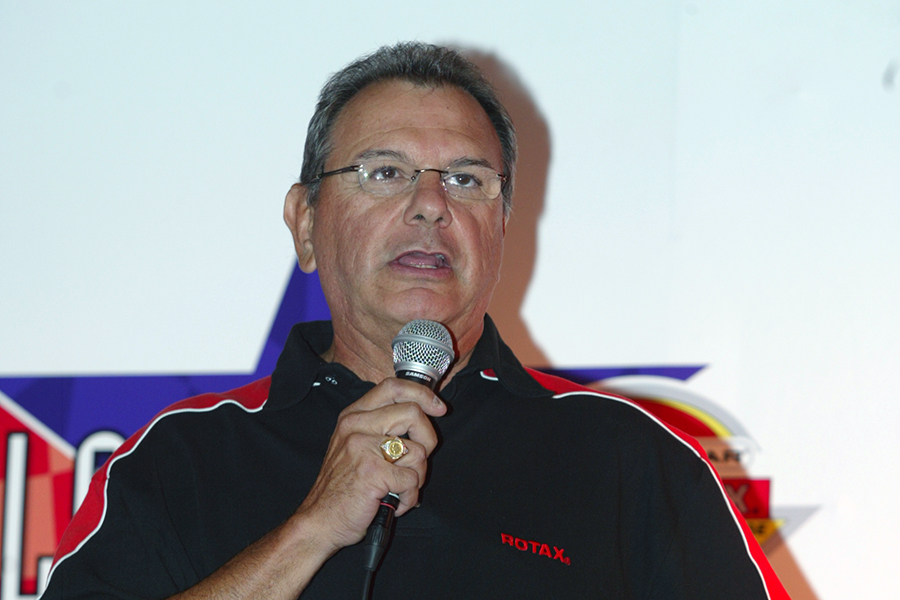 On July 11, the sport of karting lost a man who made an indelible mark on the industry in the late 90s and early 2000s.  Joe Ramos Sr. was at the helm of SSC Racing in 1997 when the WKA Constructors Championship brought a national CIK-style racing series to United States karting, and he led the company and its team into that important program, as well as the Superkarts! USA ProMoto Tour in 1999 and beyond. These series vaulted national karting to the next level and paved the way for the future. Ramos and SSC Racing pushed the professionalism of the industry to new heights thanks to their ties to the motorcycle industry, and they supported the introduction of major league racing companies like Kawasaki. 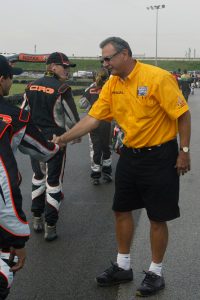 Ramos shaking the hands of all the competitors at the US Rotax Grand Nationals in 2009 (Photo: On Track Promotions – otp.ca)

In addition to Ramos’ initial work with SSC Racing, signing the deal for them to become the importer and distributor for the world-renowned CRG program, the company also provided the base for the introduction of the Rotax program to the United States. Ramos also assembled a network of regional Rotax series that would feed the annual Rotax Grand Nationals, an event that became in its heyday one of the sport’s largest races in the United States. SSC Racing was also home to big brands like Gearbox Racing Apparel and MoGo accessories. Under the leadership of Ramos, SSC Racing became a powerhouse in the karting industry.

Joe was totally dedicated to taking karting to the ‘next level’ with SSC Racing, and he was also active in attempting to bring together the sport, launching the North American Karting Association (NAKA) in 2000. While NAKA was unable to plant the roots necessary to ride out the sport’s regular waves of momentum, the effort remains commendable.

Joe served in Vietnam at the age of 18 as a Mexican citizen, and he became a very proud US citizen at the age of 44, a fact that not many people know. We’d also like to present the thoughts and stories from a few of those in the industry and the sport who knew Joe well.

Marshall Martin was the US Rotax Director for some time, in addition to his role as the Race Director for many US Rotax Grand Nationals.

“I had the honor of working with Joe for eight years and got the opportunity to see a man who was passionate about karting and the people in it. Many saw a business man and disagreed with some of his ideas. Those of us close to him saw a man dedicated to the sport and the racer. His goal was for everyone to achieve a high degree of success at what ever level they were competing, from club to national. His belief and drive in the Rotax program guided it to one of the most successful programs in karting history. His love of family was the only thing that surpassed his drive for success in the karting world. He was a visionary who brought some needed changes and thinking to how the industry operated. He is deeply missed by his family and friends that knew him well. I will miss him as will many others.” – Marshall Martin, US Rotax Director

“I can’t say that I remember the first time that I met Joe Ramos more than 20 years ago, but I can say with certainty that he left a lasting impression.  When you were at the track, you always smelled him before you saw him.  Well, you smelled the cigar he invariably was puffing on in the paddock.  In the early years, he was always decked out in the CRG team shirts: black, yellow and red, with that shock of grey on his chin surrounded by that dark black beard, looking like part race promoter, part mafia don, and part CEO.  Joe definitely left an impression. Over the years, we all saw that he was at his best while “striking the deal”.  Whether it was to be the CRG importer, the Kawasaki KX60 chief, Gearbox apparel or Mogo accessories, Joe was always looking for the next deal to negotiate.” 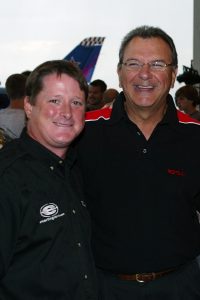 EKN’s Rob Howden with Ramos at the 2008 US Rotax Grand Nationals in Colorado (Photo: EKN)

“He was always looking to further the sport of karting and make it more accessible to the public, whether it was at his ‘Thursday Night Thunder’ races at Irwindale Speedway, the North American Karting Association for the industry, or taking over the X-Plex track in Vegas for its final years.  His vision was always far ahead and always with the sport of karting, and profit, in mind.  To some, that profit motive may have been taboo to mention, but for those of us in the industry, it was paramount to the success of the sport and the businesses that support it.  As an importer, he wanted our businesses to be profitable, which in return, would make his business profitable and ensure that we would all survive and be able to support our families.  I became close with Joe when he made his biggest deal, and signed as the Rotax importer.  I can remember one of those Thursday Night Thunder races in the summer of 2000 when he first rolled out one of those funny looking engines and asked Darren Elliot to drive it.  He was convinced that it was the future of karting, and he was certainly correct in that assessment.  It created the foundation of everything current karting looks like.”

“Aside from building that business into one of the most successful Rotax importers in the World, for many years he ran some of the largest and most competitive events in US Karting, the US Rotax Nationals.  These events were great, but they were backed by a program of almost 50 local series that fed the big event.  Many years later, a few of us in the industry are still trying to replicate the success of this program that he envisioned almost 20 years ago.  I have so many great memories of Joe Ramos, some tough negotiating sessions, some great meals all over the world and more than a drink or two.  He bought most, if not all, of those meals and drinks, I cannot say that he ever let me pay for one.  He was a kind, generous, thoughtful and loyal man, tough in business, who always got the deal and I will miss him.  When many of us will get together on September 7th to remember this man, the stories will flow and I am sure that a drink or two will be had.  At the end of the day, there will be one question asked that never had to be asked if Joe was in the room.   Who is going to pick up the tab?” – Andy Seesemann, Full Throttle Karting 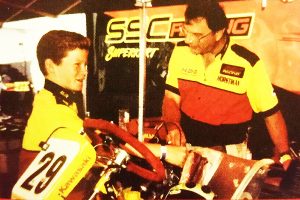 In the early days of SSC Racing, they were very focused on developing a competition connection between Europe and North America through CIK racing. Ramos was a big supporter of the WKA Constructors Championship, which feature Formula A and Junior Intercontinental A classes.  SSC Racing fielded a team in that series that featured many top young drivers, including Californian Patrick Long, who went on to become one of the leading sports car drivers in the world. Long currently races in both the Pirelli World Challenge and World Endurance Championship.

“Joe was the ultimate businessman and sponsor. He showed that you could be an absolute gentleman and a hardcore competitor. I remember questioning his decision to paint all of our CRG chassis (and wheels!) yellow. Naturally, it was my first lesson in branding.  Joe was often one step ahead of traditions and having his foresight in karting was a gift!” – Patrick Long, former SSC Racing / CRG factory driver

If there is one driver who came to represent SSC Racing in the late-90s and throughout the 2000s, it’s Darren Elliott.  The Californian entered karting in his late 30s and become one of the sport’s superstars in Superkarts! USA competition.  Elliott worked very closely with Joe and speaks very highly of the man. 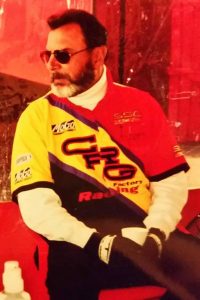 “Joe Ramos was one of the most honest people that I’ve ever come across in this sport. He was a true long lasting friend of mine. And furthermore, he was a friend of all, no matter what color your chassis was. I met Joe through Paet Hildago when I was done driving for Renspeed, and from our first meeting, we became friends forever. Joe was somebody who never had crossed me and always supported me from the bottom of his heart. If Joe said that he would, he did. That’s not something that you always find in racing and these things further reinforced the meaning of a true friend. Some people have heard of some of the things that I got to do as a privilege of driving karts. Whether it was being introduced to friends at the CRG factory in Europe or racing the European Championship, or racing the World Championships or simply traveling all over the country. Many don’t know the reason that I got to do these things most times were because of Joe Ramos. He supported me, he trusted me and I trusted him. He’s the one who had the connections because his connections were his friends he made throughout his life. His intentions were always honest. He is a true Legend! Joe is somebody that I will truly miss. Until we meet again buddy! Godspeed Joe!” – Darren Elliott, former SSC Racing team driver

The family will hold a service for Joe at Riverside National Cemetery on September 7 at 1:00 pm and all are welcome to attend. Anyone wishing to attend should email Joe Ramos Jr. (joeramossb@gmail.com). After the service, everyone will head to the Ayres Hotel & Spa in Moreno Valley (12631 Memorial Way, Moreno Valley, CA), and we’re told that there will be a bar! Anyone who wants to honor his life and go down memory lane are welcome to attend! Everyone is invited.

EKN would like to offer its condolences and best wishes to the Ramos family at this time.