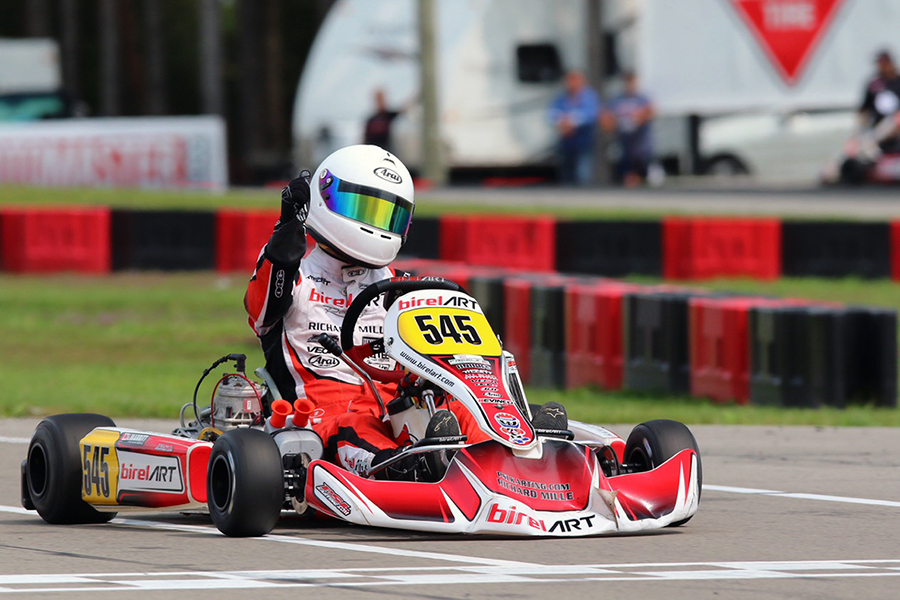 “It was a great weekend at Mosport as we not only showed the speed of our product, but also the diversity of our complete product line winning in Cadet, Shifter and Briggs classes,” expressed PSL Karting President Dominic Labrecque. “I would like to express a huge thank you to all of our drivers, mechanics and dealers including Prime Powerteam, Gerald Caseley Racing, Ben Cooper Racing, AI Motorsport, ISM Kartsport and NR Kart Store for the continued success.”

Issac Marrit scored the Open Shifter National Championship after starting his main event in the fourth position. Fellow PSL Karting pilot Davide Greco lined up on the pole position courtesy of his prefinal victory and would put a pair of PSL Karting drivers on the podium with his third place result. Marrit drove forward and claimed the checkers, one of four national titles on the day for PSL Karting while Justin Luik put three Birel ART in the top-five with his fourth place effort.

Nikita Johnson made the trek north of the border from his home in Florida to take the Mini ROK Canadian National Championship as Birel ART drivers dominated the podium results. Frankie Esposito crossed the line in the second position racing with Birel ART dealer Prime Powerteam while Cole Newton, also competing out of the Prime Powerteam stable, stood on the third and final step of the podium.

Ayden Ingratta, running on an AI Motorsports Ricciardo kart, was the driver to beat in the LO206 Cadet category as he claimed the prefinal victory. Ingratta went on top the blocks in the main event giving the Birel ART product line another race win and national title. Ben Cooper Racing driver Ashton Henckel put two drivers in the top-five as he secured a fourth place finish after running in the top-three in the weekend’s prefinal event.

It was Gerald Caseley Racing driver Callum Baxter who came out on top in the LO206 Junior Lite division as he improved from his second place finish in the prefinal to score the main event victory. Celebrating Birel ART North America’s fourth national title on the day, Baxter was joined on the podium by Owen Mahar as he secured a third place finish. AI Motorsports driver Stefano Lucente added another podium to the weekend’s tally with a third place finish in the LO206 Senior division as he was chased across the line closely by ISM Kartsport driver Alex Murphy who secured the fourth position.

In the ROK Junior and Senior classes, Prime Power Team Birel ART branded drivers were on the verge of victories but luck would not be on their side. Ryan MacDermid won the ROK Senior prefinal but was involved in a first lap incident during the day’s main event. Mackenzie Clark stood on the second step of the podium in the ROK Junior division as the vice-champion and also claimed a ROK International Final ticket.

Birel ART North America (PSL Karting) is the National Importer and Distributor of Birel ART products and accessories, including Ricciardo Kart, Kubica Kart and Freeline accessories. Visit www.pslkarting.com to find a retailer near you. Follow our racing team and product updates via our social media @pslkartingofficial.