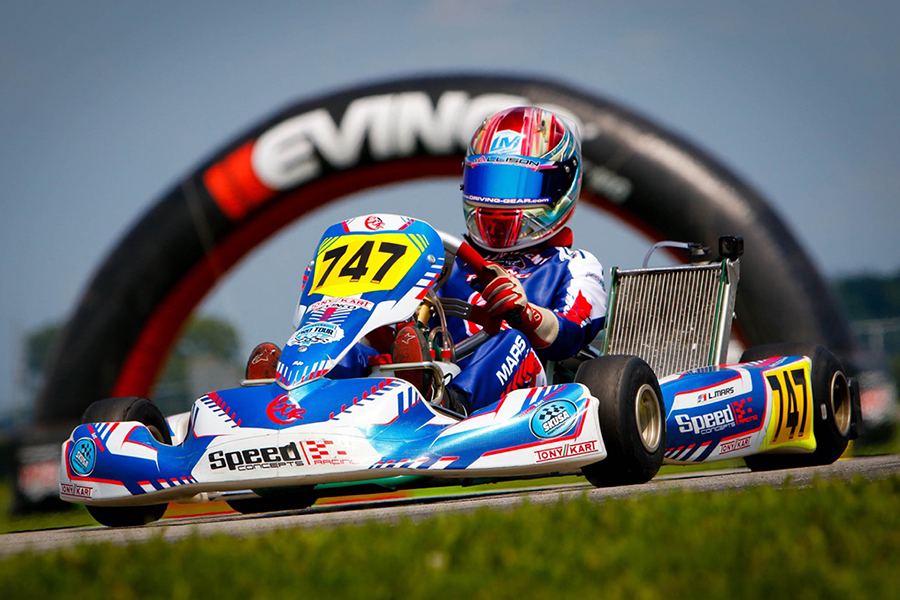 It was the final event weekend of the Superkarts! USA (SKUSA) Pro Tour as Speed Concepts Racing (SCR) descended on the New Castle Motorsports Park facility for rounds five and six of the 2018 program. With championships on the line, SCR branded drivers were focusing on race wins and podium results as the racing season continues to roll on.

With great pace by nearly every Speed Concepts Racing competitors throughout Friday’s official practice sessions, Saturday brought a new set of challenges as hot and humid temperatures rolled into the area, forcing teams and drivers to adjust setups to get the best out of their equipment.

Justin Arseneau led the way for SCR drivers in the X30 Junior qualifying with a third place effort while Luke Lange impressed all turning the fourth fastest lap of the session. Luca Mars slotted into the 13th position while Kyffin Simpson put four SCR drivers in the top-20. With all drivers progressing through their respective prefinals to transfer directly to the main event, Mars was forced to run the last chance qualifier due to an on track incident. Knowing that the speed was there, Mars methodically worked his way forward in his last chance race to cross the stripe in P3 and transfer to the final.

With all four Speed Concepts Racing drivers on the grid, the race and results would not go as planned as on track battles became fierce. Simpson would lead the quartet with a solid 11th place finish.

The X30 Junior drivers returned to the track on Sunday with Arseneau leading the way in qualifying with a fifth place result. Continuing to show speed, the Canadian finished second in his prefinal before a sixth place finish in the main event. Luca Mars improved from his 13th place qualifying effort to finish his prefinal in fifth but showed great pace and was looking forward to the final. Working his way forward after falling back on the start, Mars took over the top spot in the closing stages of the race but was unable to hold his fellow competitor at bay. Crossing the line in the second position, the Speed Concepts Racing driver celebrated later that afternoon on the podium.

Kyffin Simpson continues to impress in his return to karting turning his 17th place qualifying run into a sixth place result in the prefinal. Involved in an incident at the start of the X30 Junior main event, Simpson fell back to the tail of the field before driving like a seasoned veteran to a 15th place finish.

Paul Bocuse improved with each passing session in both days of wheel-to-wheel competition. Saturday saw the young talent qualify ninth before finishing fifth in the prefinal and fourth in the main event. Sunday was a similar story as his 14th place qualifying effort turned into a tenth place finish in the prefinal before securing a fourth place result in the main event. Coming into his own, Bocuse is going to be one to watch in the later stages of 2018 and onwards into 2019.

Noah Baker was forced to miss Saturday’s Mini Swift competition as a practice incident destroyed his Speed Concepts Racing Mini Swift machine, also making a trip to the hospital. With a sore wrist, a decision was made to keep him out of the seat on Saturday and evaluate his condition for Sunday. The choice looked to be a good one as Baker qualified on the front row of the Mini Swift prefinal and went on to take the victory and pole position for the main event. Working hard and driving in a lot of pain, the longer final took its toll on the young competitor as he was unable to stay at the front of the field but he showed the heart of a champion to come home in sixth.

A late entrant under the Speed Concepts Racing banner was X30 Masters driver Scott Roberts. After performing very well at the United States Pro Kart Series event two weeks prior, the Floridian entered SKUSA competition in the hopes of standing atop the podium. Saturday and Sunday were carbon copies of one another seeing Roberts qualify in the second position and win the prefinal before finishing fifth and seventh respectively in the main events.