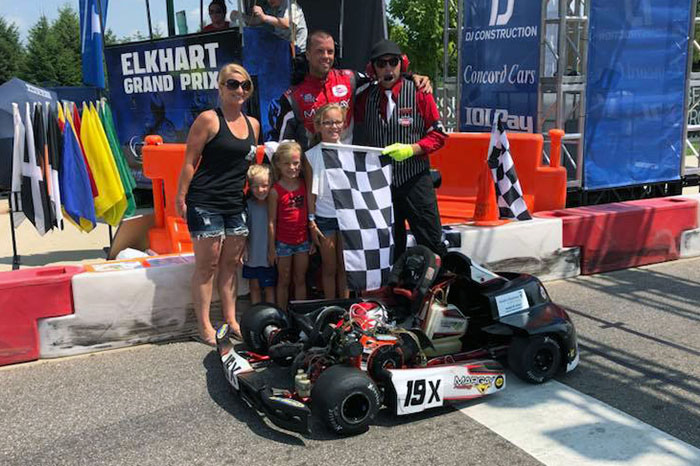 For good portion of the 1990s, Elkhart, Indiana was on the national map regarding karting. The famed Elkhart Grand Prix was one of the largest events in all of karting, attracting hundreds of racers, thousands of fans, and gaining television time on ESPN. Many factors brought the race to a closure, however, the memories remained with city residents and karters. Last year, the city of Elkhart and USAC Karting brought racing back to the streets of the northern Indiana town with the revival of the Grand Prix. The THOR Industries Elkhart Riverwalk Grand Prix returned for a second straight year on August 10-12.

The unique track layout of the new Elkhart Riverwalk Grand Prix is roughly 6/10-mile, taking competitors across the Elkhart River twice each lap. The City Center Park alongside the course hosted events all weekend long, including concerts and other festivities for both racers and spectators. The Elkhart GP served as the second stop in the new Triple Crown of Karting, in cooperation with the rejuvenated Quincy Grand Prix and the Labor Day spectacular Rock Island Grand Prix. 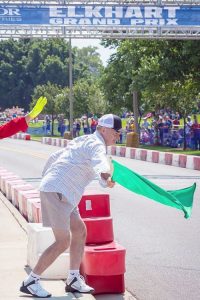 In total, the event welcomed 178 entries in nine categories, a solid increase from one year ago. Each category contested a qualifying session and heat race on Saturday, with the main events held on Sunday.

“The growth of the Thor Industries Elkhart Riverwalk Grand Prix in 2018 was right on schedule,” stated Mike Burrell of USAC Karting. “Entries were up about 20%, we had two days of safe & competitive racing, and the activities around the race drew an estimated 17,000 spectators. We moved the pits right into the center of activities which allowed karters to be right in the middle of the concerts, fans, and other activities. In just two years, Elkhart has again become a ‘must attend’ event for many karters!”

Tony Neilson was able to come away from Elkhart with three victories this year, bringing his two-year total to five. Neilson’s first win of the weekend came in the Briggs 206 Heavy, one of the Triple Crown categories. Neilson won in Quincy, following it up with a near five-second advantage after 20 laps in Elkhart over Nicholas Ockenfels and Allen Borntreger. The second victory was in Yamaha Masters, an 11-second gap at the checkered flag over Todd Bolton and Gary Monnett. It was near duplicate performance in Briggs 206 Heavy B main event, with Neilson driving away to a five-second win over Nicholas Ockenfels and Gage Kemp. Neilson contested six categories on the weekend, placing on the podium in all six with a runner-up in Briggs 206 Masters and two third-place results in the Yamaha Heavy finals.

The quickest category of the weekend was the 125cc Shifter division, another category that is part of the Triple Crown of Karting. Joe Ruch won in Quincy and repeated in Elkhart. Nineteen drivers reached speeds of over 80mph down the city streets with Ruch defending his crown from last year. Joe was the only driver to break the 41-second mark during the Final, leading all 20 laps to earn a six-second victory. USAC Battle at the Brickyard winner Devon Smith-Harden was second with Scott Barnes from Bermuda in third.

Yamaha Heavy was the third category as part of the Triple Crown of Karting at Elkhart. Tim Hollowell was able to grab the lead in the second half of the race and drive away to a two-second advantage after 20 laps. Early leaders Michael Dittmer and Neilson completed the podium. Dittmer was able to repeat as the winner in the Yamaha Heavy B class. It came down to the closest photo finish of the event with Dittmer crossing the line ahead of Blake Korth, separated by just 12 thousandths of a second. Neilson was once again in third. Hollowell also won the Yamaha Medium category, edging out Dittmer for the win with Cameron Parr earning the third spot. Preston Taylor completed the Yamaha winners, earning the victory in the Junior division. Taylor beat Mason Piper to the line by 37 thousandths of a second with Tanner Tecco in third. 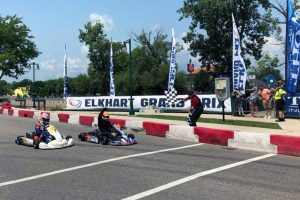 Two Finals were held for the 80cc Senior Shifter class. Devon Smith-Harden won the opener, driving away from Troy Allard and Chase Allard. The second was a close fight to the end with Troy Allard beating Smith-Harden to the checkered flag by 89 thousandths. Zachary Schiff ended up third. Jeff Scott became a first time winner in the Briggs 206 Masters class. Scott was able to work past Neilson for the lead, driving away to near six-second margin of victory. Jeff Hill completed the podium in third.

With the city behind the event, and the growth in racers, you can expect the Elkhart Riverwalk Grand Prix to continue in the future, welcoming racers from all over the midwest and states across the country. Street racing is gaining momentum with grassroot racers and the 2019 edition of the Grand Prix should be another success.