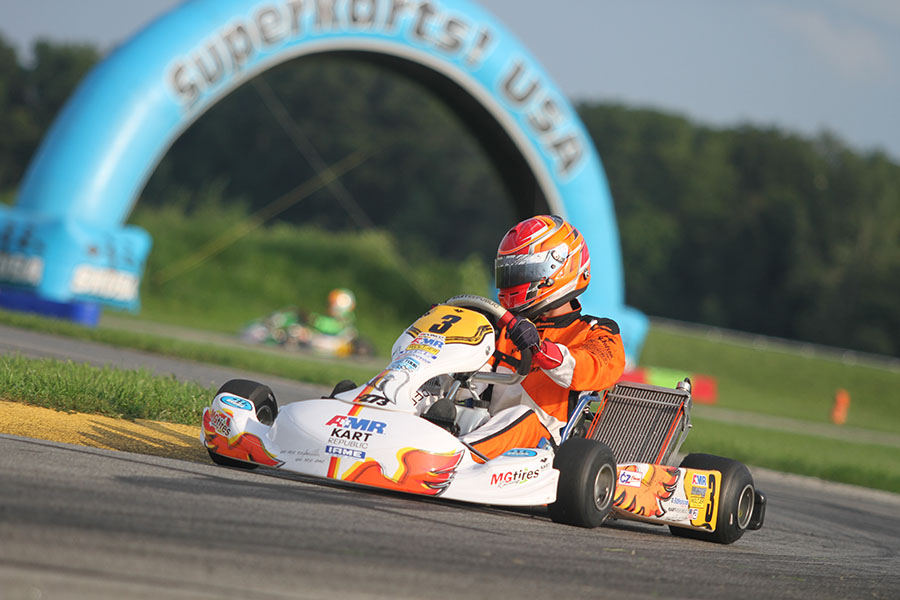 The final event for the 2018 Superkarts! USA Pro Tour completed the opening day of racing at the New Castle Motorsports Park. The ninth edition of the SummerNationals ran without any weather issues, however, the day was along with LCQs and delays due to red flag during practice. The seven main events wrapped up just before 7pm with the sun setting over the pond straight, followed by the podiums. It was an exciting day as the fifth round of the championship chases were completed on Saturday.

The 78-driver field in the X30 Senior were split up in qualifying, while running two separate Prefinal for all the drivers. Former SuperNationals winner Marco Maestranzi (Top Kart) was able to end the fast group as the top qualifier with last year’s SummerNats winner Brandon Jarsocrak (KSNA / Kart Republic) in second. Ironically, the two made contact in a weird circumstances at the end of the session in turn 13. Both suffered mechanical issues, but were back on the grid for their Prefinals. Jarsocrak managed to score the win in the opening Prefinal, holding off championship contender Ryan Norberg (PSL / Birel ART). In the second Prefinal, former SuperNationals winner Jonny Edgar (Tony Kart) grabbed the win over SpringNats victor Dante Yu (CompKart). Maestranzi dropped down the order, placing 16th and forced into the LCQ. Leading the second chance race, Maestranzi suffered an engine failure, and did not transfer. The main event began with Edgar and Jarsocrak on the front row. Norberg and Luke Selliken (RPG / Kosmic) joined them at the front. Selliken moved himself into the lead and looked to have a handle on the race. Jarsocrak and Norberg slipped past him to settle the score. Jarsocrak was able to fend off Norberg in the final corners, scoring his second straight SummerNationals victory. Edgar was able to slip by Norberg for second at the line by four thousandths of a second. Selliken ended up fourth with Alex Bertagnoli (FMS / Kart Republic) in fifth. 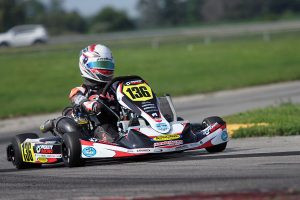 The Sodikart duo of Hunter Pickett and Jake French set the pace in the S1 Pro Stock Honda division with Pickett topping qualifying and French beating the field in Prefinal. French led the majority of the Final with championship leader Billy Musgrave (MRC / Aluminos), joining French and AJ Myers (TB Kart USA). French began slowing in the closing laps while Pickett stepped up the pace. Pickett went from third to first while French dropped to third behind Myers. Pickett drove his way to the checkered flag for his first victory of the season over Myers – his third podium of the season. French held on for third, just enough until his engine had enough. The same for Musgrave, who held on to fourth despite a lack of speed in the second half of the race. Championship contender Kyle Wick (RPG / CRG) ran fifth.

The S2 Semi-Pro Stock Honda division was dominated by all day by Blair Hosie. In his Aluminos debut, Hosie drove away in both the Prefinal and Final, unchallenged on the day. Consistent laps gave him a eight second advantage at the checkered flag. Max Hewitt (CRG) was the second quickest driver on the track. The problem, he stalled at the start of the Prefinal and fighting his way forward, was removed from the results for leaving tech early. Starting dead last, Hewitt knifed his way through the field to climb his way to second, pushing championship leader and provisional title winner to third. Keawn Tandon (DRT / DR Kart) and Matt Paesch (Orsolon / CompKart) completed the top-five. 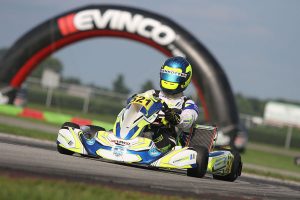 Leonardo Nienkotter tighten up the X30 Master title chase with his second victory of the season (Photo: EKN)

Things tightened up in the championship chase for the X30 Master with Leonardo Nienkotter (CompKart) scoring a second victory on the season. The Brazilian set fast time in qualifying, but Florida driver Scott Roberts (SCR / Tony Kart) came away with the win in the Prefinal. Roberts led early in the main event until getting shuffled back as Nienkotter took over the lead. Charging his way forward from a mechanical DNF in the Prefinal, Jess Peterson (PGR / Ricciardo) found himself in second and leading in the closing laps. Nienkotter was able to grab the lead and victory on the final circuit, with Peterson in second ahead of Jonathan Silva (CompKart), scoring his first podium finish of the season. Two-time defending champion Derek Wang (RPM / FA Kart) ran fourth with Roberts in fifth. 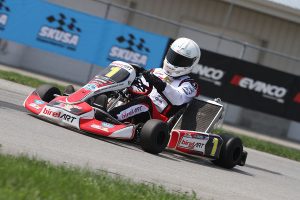 The same is for John Crow, who landed his third S4 Super Master Stock Honda victory on the season to secure the provisional championship. Crow swept the day, driving away to a 2.3-second advantage. The fight for second went down to the wire with Mike Rivera (CKR) earning the spot over Rod Clinard (CRG). Farshad Bagheri (TB Kart) and Brett Harrelson (CRG) completed the top-five.

Like the Senior division, the X30 Junior category was split up and ran an LCQ to make up the Final grid. Championship leader Arias Deukmedjian (Kosmic) and Connor Zilisch (Tony Kart) won both Prefinal races to make up the front row. Deukmedjian was shuffled back at the start, but reclaimed the lead quickly. At roughly the halfway point, an incident involving Alan Tang (Parolin) and Dale Curran (FA Kart) brought out a full-course caution. This bunched up the field for a restart to close out the second half of the race. Deukmedjian got the worst of it, getting pushed outside the top-10. Zilisch took over the the lead and drove away to the provisional win, until a five-second penalty for a jump start infraction. This handed the victory to Reece Gold (FA Kart) with Matheus Morgatto (Parolin) and Santiago Trisini (Kart Republic) joining him on the podium. Deukmedjian drove his way back to fourth with John Burke (Tony Kart) in fifth. MacKenzie Clark (Birel ART) drove his way from the LCQ to ninth in the Final. 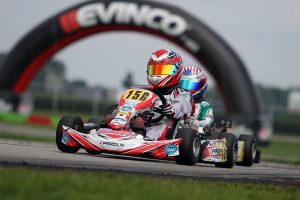 It was a masterful performance by Jace Park in the Mini Swift category. Park (Parolin) was able to win the Prefinal, using the pole position to lead all 18 laps of the Final. Former Micro Swift champion Kai Sorensen (Tony Kart) locked on Park’s bumper and the two were able to get away from the field. Sorensen waited until the final circuit, with the two swapping the lead four times in the final circuit to make for a run at the victory in a drag race to the line. At the checkered flag, Park won by five thousandths of a second over Sorensen. Annie Rhule (Energy) was able to get away in third, claiming her first SKUSA podium. Paul Bocuse (Kart Republic) won the battle for fourth ahead of defending champion Carson Morgan (Kart Republic).

Parolin scored a second victory on the day thanks to Caleb Gafrarar in Micro Swift. Gafrarar came away with the Prefinal win and was able to get away from the field with Logan Julien (Merlin) and Ben Maier (Nitro Kart) on his bumper. Gafrarar led all 18 laps with Julien unable to make a move, losing the drag race to the checkered flag by 43 thousandths. Maier ran solo in third with Aryton Grim (Nitro Kart) in fourth with top qualifier Matias Orjuela (Parolin) up 14 spots to fifth.