EKN’s Paddock Insider is part of the Trackside coverage, bringing you notes, updates and breaking news as it happens. The article will be a timeline of events as they happen during the 2018 SKUSA Pro Tour SummerNationals at the New Castle Motorsports Park in New Castle, Indiana. The information will not be seen anywhere else. Please feel free to comment and discuss our coverage and today’s action in the EKN Global Members Discussion area below. Make sure to tune in all weekend long to the live audio and live timing at eKartingNews.com/live 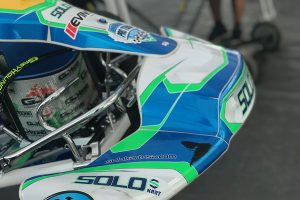 The Solo Kart program has been making steady strides through its recent introduction into the US karting community, having debuted in the F Series Gearup Challenge in 2017. Adam Pettit and his partner Salvo Sparacio have worked tirelessly to develop their chassis, partnering with Righetti Ridolfi to produce their design, and they are thrilled with their consistency and build quality.  Pettit and Sparacio are both racing in the X30 Master class, and they’re also fielding a Solo Kart SK-2 chassis for former SummerNationals double-winner Jesus Rios Jr. 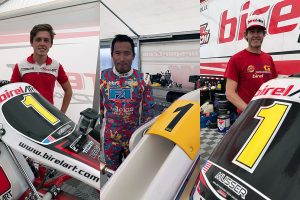 This weekend, three drivers have a chance to earn a third career Superkarts! USA Pro Tour title. For two, there is a chance for a three-peat in their respective categories. Two-time X30 Senior champion Ryan Norberg (PSL / Birel ART) is gunning for a third straight in one of the most competitive categories in the series. Norberg won in 2016 as a privateer, following up with a four-point advantage in 2017 with PSL Karting. This year, Norberg is trailing by entering the weekend but factoring the drop, is the driver at the top by a slim margin. Derek Wang (RPM / FA Kart) has the toughest road to a three-peat in the X30 Master division. Wang is third in the standings entering the weekend, trailing by 175 points and thus needing a lot of help to claim the crown. Jordon Musser is the only driver of the three leading entering the SummerNationals, holding the top spot in the S4 Master Stock Honda class. Musser is the defending champion, and won the crown in 2013. If the 3G Kart Racing / Birel ART driver does leave New Castle with the championship, it will be his third SKUSA title, making it seven national championships since 2002 with his four Rotax crowns.

Lemke and Franklin Motorsports Back Together 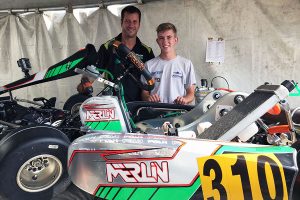 Brandon Lemke is back with Merlin USA and Jamie Sieracki (Photo: EKN)

It is a reunion at the Franklin Motorsports tent this weekend with the return of Brandon Lemke aboard the Merlin. Lemke was a longtime Merlin driver, winning at the Cadet, Junior and Senior level before moving his focus toward stock car racing. The Wisconsin driver is spending time in North Carolina, racing at the Hickory Speedway and selected events around the country. Not only is Lemke racing aboard a Merlin, he has Team FMS owner Jamie Sieracki turning the wrenches for him this weekend. It is a solid tent for Team FMS with over 10 drivers on a mixture of chassis brands including Merlin, Kart Republic, Kosmic, and Exprit. 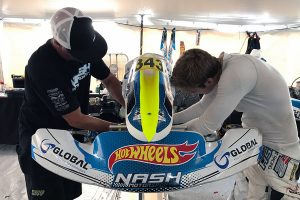 Christian Brooks is back on OTK for the SKUSA Pro Tour series finale (Photo: EKN)

Championship leader in the X30 Senior division Christian Brooks has moved back to the OTK chassis for the series finale. Brooks has run the CRG all season, including the SKUSA Winter Series under the CRG Nordam banner and the two Pro Tour events with Nash Motorsportz. The Californian remains with Nash, moving to the FA Kart model for this weekend. Brooks won at the WinterNationals aboard the CRG but struggled to find pace in Phoenix. This is the second time Brooks began a season aboard the CRG and moved back to OTK (2016). Christian is enjoying his third season in RallyCross, sitting second in the new ARX2 Championship, set to close out in Texas this September.