Four Honda championships up for grabs in New Castle this weekend 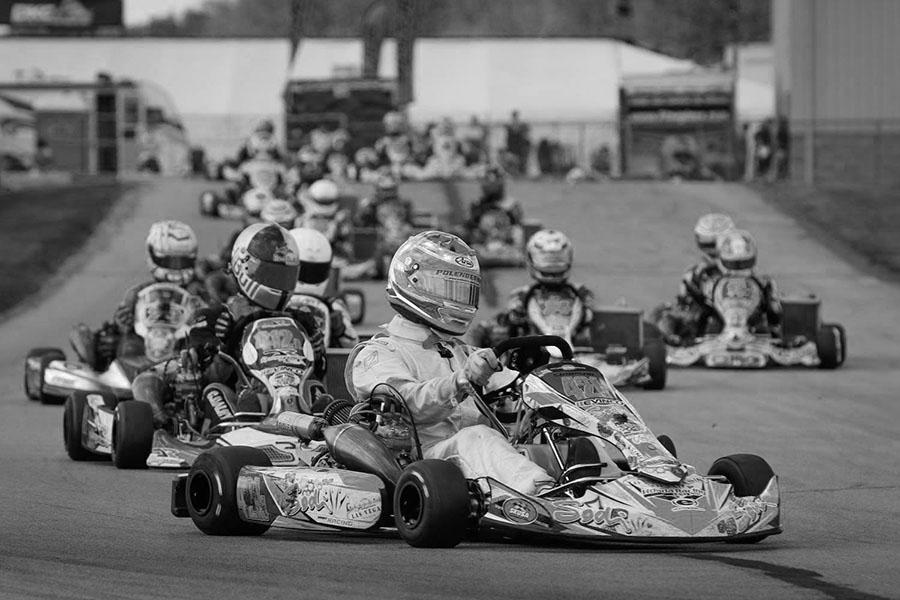 The 2018 Superkarts! USA Pro Tour is set to close out the season this weekend at the New Castle Motorsports Park. The New Castle, Indiana facility will host the ninth edition of the SummerNationals on August 10-12. The five IAME categories and four Stock Honda divisions will close out the six-round championship chase with two rounds contested around the 1-mile circuit. Plenty is on the line, including cash purse for the weekend and the title chases in the headline categories along with tickets to the IAME International Final in France this October.

This is the fourth straight SummerNationals held at the New Castle Motorsports Park. The facility was built in 2003 by professional driver and longtime karting industry member Mark Dismore. The track became the field of dreams for many karters, with SKUSA hitting the facility for the Pro Tour for the first time in 2014. The 1-mile course has 16 turns along with elevation changes and two long straights that make drafting very crucial.

eKartingNews.com is ready to be at the New Castle Motorsports Park, providing the industry-leading coverage trackside. Karting enthusiasts not in attendance can listen from home or on the road to the EKN Live broadcast at www.ekartingnews.com/live with Rob Howden providing the play-by-play call. Daily reports and updates on the EKN Social Media network will fill up your timeline throughout the weekend. First, EKN begins with a look at all nine categories competing this weekend. A preview of the IAME divisions was published yesterday, with the review of the Honda categories below. 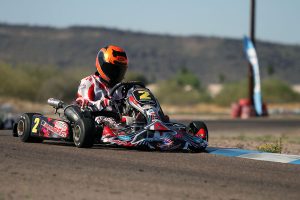 Billy Musgrave has a chance to claim his first S1 title this weekend (Photo: EKN)

This could be one of the closest championship battles in S1 history at the SKUSA Pro Tour. The 2018 season has seen four different winners over the four rounds, putting five drivers in the hunt for the title. After winning the 2012 SuperNationals in S2, Billy Musgrave (MRC / Aluminos) has yet to finish at the top of the championship podium in S1. Musgrave has won a main event in four straight years, placing runner-up in the point standings twice in five years. The four-time California ProKart Challenge champion holds a 38-point advantage over S1 rookie Kyle Wick (RPG / CRG). Wick claimed his first S1 victory at the SpringNationals, standing on the podium both days to move himself into the lead challenger position of the title chase. Close behind in third is WinterNationals winner AJ Myers (TB Kart USA). Myers won both main events at the 2016 SummerNationals, and thus knows how to be successful at New Castle. Myers will be pulling double duty, running both IAME Senior and S1 on the weekend.

When you factor in the drop, Myers moves to the top with Musgrave and Wick sitting within nine points of each other. Still in the hunt includes Nic LeDuc (Sodikart) and Rory van der Steur (Tony Kart). The two privateers shined at the SpringNationals with LeDuc winning on Sunday and Rory placing runner-up both days. Each will need double podium finishes in New Castle to be in the hunt for the top step of the championship chase. Defending champion Jake French (DKC / Sodikart) is making his return to the seat, set to pit out the back of the pickup truck under an EZup on the weekend. Veteran karter and always fast Ron White (RWR / CRG) is also making a return to the SKUSA Pro Tour. 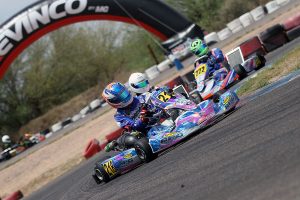 The S2 Semi-Pro Stock Honda category is welcoming its largest field of the season with 15 drivers set to tackle the New Castle circuit. They all will be chasing Brazilian Pedro Lopes (RPG / Kosmic), who is entering the SummerNationals with a four-race win streak. The title is nearly locked up thanks to his performance over the first four rounds, holding a 245-point advantage over Blair Hosie (DAMZ / Alpha). The Texan put in his best overall performance at Round Four, placing runner-up to Lopes. Next to Lopes, Cameron Egger (RPG / Kosmic) has the most podium results with three, and is currently fourth in the standings behind SpringNats podium finisher Michael Ilavia (3G / Birel ART). Three drivers that should be in the hunt for podium finishes in New Castle include Max Hewitt, making his Pro Tour debut with CRG Nordam after a solid outing at the Texas ProKart Challenge. Keawn Tandon (DRT / DR Kart) got his first podium at the SpringNationals and looking for more in New Castle. Carlee Taylor (2Wild / Tony Kart) has been improving her six-speed talents in California, making her 2018 SKUSA Pro Tour debut. 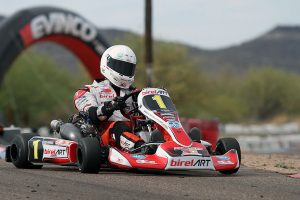 Jordon Musser can remain the SKUSA #1 in S4 with a clean weekend in New Castle (Photo: EKN)

Two drivers will battle throughout the weekend for the S4 Master Stock Honda title. The two drivers involved have won three of the last five titles – Jordon Musser and Ryan Kinnear. Musser (3G / Birel ART) is the 2013 and 2017 champion, riding off a sweep of the SpringNationals to put himself into the point lead heading into this weekend. Trailing by 46 points is 2016 champ Kinnear, who has four podium finishes of one win and three runner-up results, needing to beat Musser on the track all weekend for a chance at the title. The odd thing will be both will be under the same PSL tent with Kinnear moving over to the Phil Giebler Racing operation aboard a Ricciardo. Nathan Stewart (DKC / Sodikart) and Ben Schermerhorn (Birel ART) are fighting for the final spot on the championship podium. California ProKart Challenge champion Rob Logan (Nash / CRG) is the fifth driver on the weekend, vying to shake things up in his bid to steal victories. 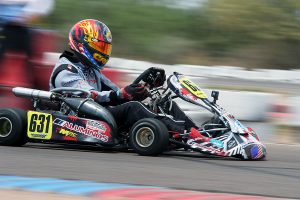 The title in the S4 Super Master Stock Honda is John Crow’s to win or lose. The MRC / Aluminos driver enters the SummerNats with a 185-point lead with three wins in four rounds. Crow has scored the most points in all four rounds to establish a solid advantage over last year’s SKUSA #2 Mike Jones (DKC / Sodikart). Jones beat Crow on Sunday at the WinterNationals, however, was not able to stand on the podium all weekend in Phoenix. Jones will need to beat Crow every session in order to help his chances of stealing the title. Rod Clinard (CRG Nordam) is in the driver’s seat for a third straight year of holding the SKUSA #3 plate. Clinard challenged Crow all weekend at the SpringNats, looking to grab a second career SKUSA Pro Tour victory. Farshad Bagheri (TB Kart USA) and Mike Rivera (CKR) is among the contenders in New Castle.