IAME International Final tickets and championships on the line this weekend 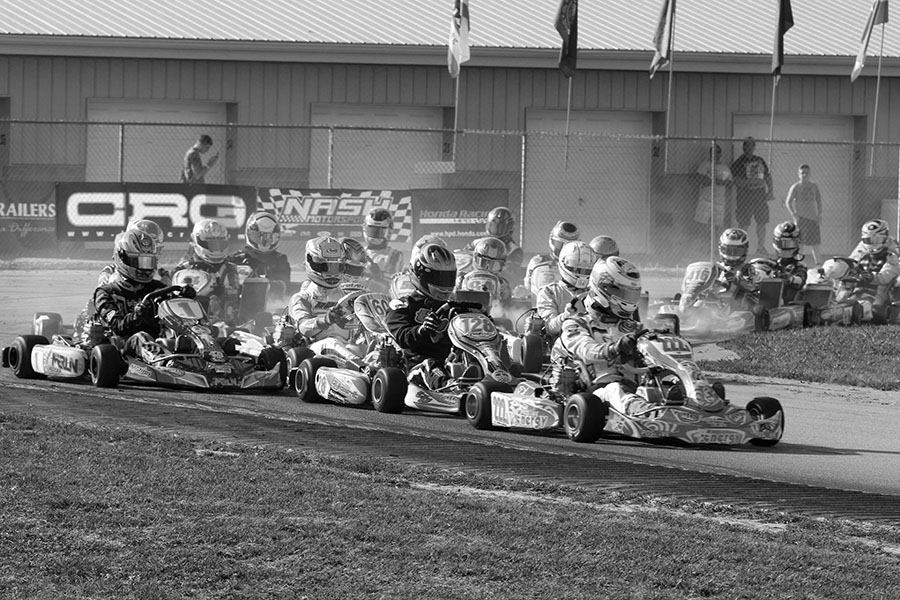 The 2018 Superkarts! USA Pro Tour is set to close out its three-event season this weekend at the New Castle Motorsports Park, and all eyes will be focused on the state of Indiana. The New Castle facility will host the ninth edition of the SummerNationals on August 10-12. The five IAME categories and four Stock Honda divisions will close out the six-round championship chase with two rounds contested around the popular 1-mile circuit. As the sport’s only true ‘national’ series, plenty is on the line, including a cash purse for the weekend, the championships and number 1 plates, and tickets to the IAME International Final in France this October.

This is the fourth straight SummerNationals to be held at the New Castle Motorsports Park. The facility was built in 2003 by professional driver and long-time karting industry member Mark Dismore. The track became the ‘field of dreams’ for many karters, with SKUSA hitting the facility for the Pro Tour for the first time in 2014. The 1-mile course has 16 turns, significant elevation changes and two long straights that make drafting crucial.

eKartingNews.com is heading to New Castle Motorsports Park on Thursday, and will provide its industry-leading coverage from trackside. Karting enthusiasts not in attendance can listen from home or on the road to the EKN Live broadcast at www.ekartingnews.com/live with Rob Howden providing the play-by-play call. Daily reports and updates on the EKN Social Media network will fill your timeline throughout the weekend. First off, EKN begins with a look at all nine categories competing this weekend. A preview of the IAME divisions is below.

The big story going into the SummerNationals will be the absence of X30 Senior point leader Jake Craig (RPM / Tony Kart). The 2014 Pro Tour champion was en route to a possible second title, however, the California driver is focused on building his resume in open wheel cars. Craig will be racing at the F1600 Super Series event in Trois-Riviers, Quebec, Canada, a series in which he sits tied in the championship standings with fellow karter Kellen Ritter. 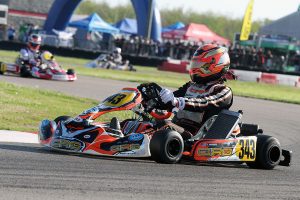 The absence of Craig puts Christian Brooks at the top of the standings heading into New Castle. Brooks (CRG Nordam) is a long-time SKUSA competitor, however, he has never been a Pro Tour champion. The WinterNationals winner stood on the podium both days at NOLA, but missed out on the steps during a challenging weekend in Phoenix. In fact, the top three in the X30 Senior title chase have two podium finishes each. Canadian Samuel Lupien (RPG / Kosmic) was runner-up to Brooks in NOLA, and ran third in Phoenix before a mechanical issues put him on the sidelines on Sunday. Defending champion Ryan Norberg (PSL / Birel ART) started out the season with a DNF, but came back to battle in the top-five in NOLA on Sunday. A third straight victory at the SpringNationals back in May, paired with a third-place on Sunday in Phoenix, has helped put Norberg in contention for an unprecedented third straight Pro Tour championship. The trio is separated by just 15 points, with Norberg holding the advantage when factoring in the drop race.

Close behind is SpringNationals winner Dante Yu (CompKart) at only 47 points off Brooks total. Yu finally got the monkey off his back with a Pro Tour victory at the SpringNats and has won two straight at the California ProKart Challenge to bring the momentum with him to New Castle. Still within reaching distance is Spanish driver Jorge Pescador (KSNA / Praga) and Senior rookie Hannah Greenemeier (RPG / Kosmic), who is looking for her first SKUSA Pro Tour podium finish.

The primary obstacle for those in the championship is the 73-kart field entered for the SummerNationals, who are all going for the victories and part of the $2,500 cash purse that is on the table. This field is much larger than the 57 entries from last year’s SummerNationals; it is nearly a sold out field for the SuperNationals in Las Vegas. Speaking with SKUSA, their goal is to possibly break up the field for practice, qualifying and Prefinals, while adding a LCQ to limit the number of drivers in the Final.

The most recent event at New Castle was the United States Pro Kart Series finale, where Brandon Jarsocrak secured his second straight series title with two wins. Jarsocrak (KSNA / Kart Republic) won at the SummerNationals last year, and is looking for a repeat. Alex Bertagnoli (FMS / Kart Republic) was on his bumper all weekend long two weeks ago and is looking to add to his podium finish at the WinterNationals. Another former SummerNationals driver is making a return, as 2015 double winner Jesus Rios Jr. will be aboard a Solo Kart. Phil Arscott won the 2010 US Rotax Grand Nationals at New Castle aboard a used Tony Kart he bought that weekend, and now Arscott is rejoining the Rolison Performance Group with whom he won two Challenge of the Americas titles. AJ Myers was a double winner in S1 back in 2016, however, the TB Kart USA driver is pulling double duty, similar to that of Billy Musgrave throughout the season.

A few drivers are returning to their roots while taking a break from the car racing world. Braden Eves (VemmeKart USA) won twice last year, including once at the SummerNationals. Dylan Tavella (PSL / Birel ART) is the defending IAME Junior champion, and is set to make his debut in the Senior ranks after racing F4 all season alongside Eves. Austin McCusker (MDR / Kosmic) is back from sports car racing while Brandon Lemke is rejoining Franklin Motorsports / Merlin, on a break in his stock car schedule. Add in local drivers Zach Holden (JHDD / Kosmic) and Jimmy Simpson (Energy), and there are plenty of contenders this weekend. 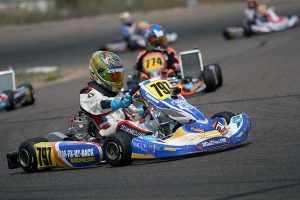 Two wins at the SpringNationals has Arias Deukmedjian as the driver to beat in IAME Junior (Photo: EKN)

The X30 Junior division is no different, up to 58 pre-entries gearing up for the SummerNationals. With that many drivers in the field, it could be a down-to-the-wire title fight. Double winner in 2018 Arias Deukmedjian (LEM / Kosmic) has the honor of leading the championship chase heading into New Castle. His two victories at the SpringNationals provides him a 61-point advantage over Jeremy Fairbairn (JHDD / Kosmic). The fellow Floridian is on a roll, winning five of his last six races, including one at New Castle during the USPKS finale. WinterNationals winners Matheus Morgatto (Parolin) and Tyler Gonzalez (CRG Nordam) are right there. Morgatto is coming off victory in Europe at the ACI Italian Championship. Gonzalez is making his SKUSA debut aboard a CRG, and is coming back from a broken wrist suffered at the US Rotax Grand Nationals at the beginning of July. Factoring in the drop, Gonzalez loses a DNF from Phoenix and moves to within 27 points of Deukmedjian.

Canadians Justin Arseneau (SCR / Tony Kart) and Thomas Nepveu (PSL / Birel ART), along with Tyler Maxson (CRG Nordam), remain in the hunt thanks to their single podium finish a piece. Jonathan Portz (Nash / Exprit) and Santiago Trisini (KSNA / Kart Republic) were the other podium finishers on the year, and both are returning to action for the SummerNationals. With the large field, there will be a number of contenders throughout the weekend, which may include USPKS winner Luca Mars (SCR / Tony Kart), USPKS champion Nicholas Terlecki (FMS / Merlin) and SKUSA Winter Series champion Sebastian Montoya (Tony Kart). Montoya will make his 2018 SKUSA Pro Tour debut after spending much of the season in Europe and back home in Columbia. 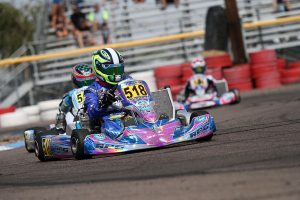 There is a five-driver fight for the title in the X30 Master division, currently led by Brazilian Paulo Lopes (RPG / Kosmic). Lopes is the lone driver in the class with four podium finishes, including a victory at the SpringNationals. Factoring in the drop, fellow countryman Leonardo Nienkotter (CompKart) moves into the championship lead. A DNF at the opener was followed by three podium finishes which began on Sunday at the WinterNationals. Lopes certainly has the advantage with two rounds to improve, while Nienkotter needs to be close to perfect all weekend in New Castle for a chance at the title and the IAME International Final ticket. Still in the hunt remains two-time defending champion Derek Wang (BBR / FA Kart), Travis Irving (FW / CompKart), and Jess Peterson (PGR / Birel ART). Wang and Irving each have a podium while Peterson stood on the steps both days at the WinterNationals, including a victory in the opening round.

The SummerNationals is welcoming a handful of new, but not new, drivers to the field. 2013 SKUSA Pro Tour champion Scott Falcone (KSNA / Kart Republic) is making a comeback to the series. Current S4 Super Master point leader John Crow (MRC / Aluminos) is set to run double duty on the weekend, making a return to the IAME Master class. Top Master driver from Texas David Pergande (JHM / Tony Kart) is set for his SKUSA Pro Tour debut at the SummerNationals, along with newcomer Andriy Tsyupka (Tecno Kart USA) who showed speed at the USPKS event. One driver who was fast that weekend was Scott Roberts (SCR / Tony Kart), scoring two podiums and one victory. Making his SKUSA Pro Tour debut in the Master class is former Rotax World champion Martin Pierce (CompKart). The Irish driver is no stranger to the USA, having won the TaG class at the Rock Island Grand Prix in 2006. 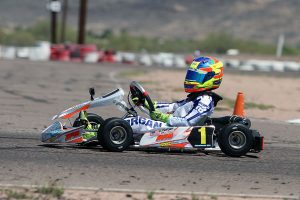 The Mini Swift championship is in the hands of defending champion Carson Morgan (RPM / Kart Republic). The Californian had three straight podiums to start the year, including two wins before a hard flip on Sunday at the SpringNationals broke his nose. Morgan has the advantage of the drop race to grow his point advantage from four points over Jack Jeffers to 138. However, Morgan will need to perform well both days in order to lock up a second straight title, and the IAME International Final ticket. Jeffers (Orsolon / Benik) has been near the front all season, earning his best finish at the last round with a runner-up finish to Noah Baker (SCR / Kart Republic). Baker is just 37 points back of Morgan in the total standings thanks to his two podium results at the SpringNationals. WinterNats winner Jeremy Fletcher (OGP / Kart Republic), newly-crowned USPKS champion Kai Sorensen (Supertune / Tony Kart) and USPKS New Castle winner Jace Park (JRJK / Parolin) remain in the title hunt. Local driver Elliot Cox (VemmeKart USA) is among the contenders on the weekend along with former New Castle winners James Egozi (Koene / Tony Kart), Sebastian Ng (Nitro Kart), and Mateo Rubio-Luengo (Parolin). Annie Rhule (Checkered / Energy) is looking to add her name as a female winner on the SKUSA Pro Tour. 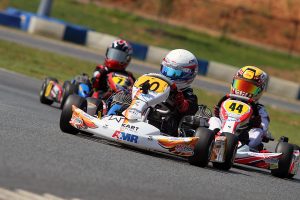 The battle in the Micro Swift championship is a three-driver fight. Max Garcia (KSNA / Kart Republic) has zero wins on the year, but four straight podium finishes to enter the SummerNationals as the point leader. Garcia has three runner-up results including four straight top qualifier honors. The victories have been split by two drivers: Caleb Gafrarar (JRJK / Parolin) and Ben Maier (Nitro Kart). Factoring the drop race, Gafrarar leads by five points over Garcia with Maier five points back in third. Each and every session will be crucial for all three drivers in their bid for the title. Graham Trammell (RPG / Energy), Adam Brickley (Nitro / Energy), Logan Julien (FMS / Merlin) and Cameron Myers (Margay) could be factors in the podium positions.