Exciting Races in the Heat Wave at Essay 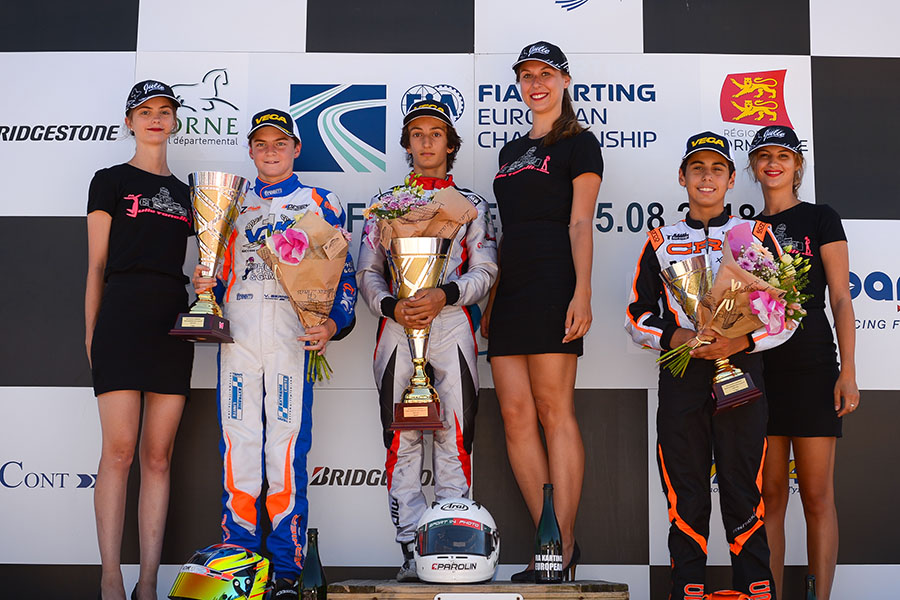 The last European Competition of the 2018 FIA Karting season kept all its promises at the Aunay-les-Bois / Essay circuit. Exceptional performances and multiple twists came with the victories by Gabriele Mini’ in Junior and Dexter Patterson in OK. But the titles went to Drivers who had accumulated enough points in the ranking previously to negotiate this last Competition with relative caution, a task that is not always easy. Paul Aron (EST) is the new FIA Karting European Junior Champion, while Hannes Janker (DEU) has become FIA Karting European Champion in OK without finishing the Final.

An attentive observer of the entire Essay Competition, CIK-FIA Vice President Kees Van De Grint wanted to share his enthusiasm for this great sporting event in Normandy: “The Essay Competition again offered a fantastic karting weekend, as the sport should always be.

“Claude Gripon, Philippe de Mautor and the entire team of volunteers from the K61 club should be congratulated and thanked for their unwavering commitment to the organisation of this event. For example, I would like to highlight the role of the person in charge of the circuit entrance reception who has fulfilled their mission with great efficiency and cordiality which never faltered during the entire week. It might seem like a small detail, but it’s the first contact with the circuit when we arrive and it’s very important. The work of the rest of the volunteers’ was efficient despite the strong heat that prevailed throughout the meeting. The site and the circuit have been beautifully prepared and showcased. It might sound old-fashioned, but for me it’s the best way for karting. For me Essay always remains one of the top organisers of Karting Competitions.

“I would also like to thank the Promoter RGMMC for the way the FFSA International Handikart Trophy was perfectly integrated with the event. Karting is for everyone, disabled Drivers deserve full respect and I must add that they have gave us a very good show.

“Finally, my compliments to Dexter Patterson: this young Brit may have made the OK Competition a little boring with his incredible dominance, but he was ahead the rest all weekend and his Final victory is well deserved. Congratulations to him!”

Sunday was once again bathed in very high temperatures under a totally blue sky. In the morning, the last Qualifying Heats have generally confirmed the hierarchy of the day before. The intensity rose a notch during the Finals during which we saw first-rate performances. A few minor incidents hampered the Drivers’ progress and there were many retirements.

The FIA Karting European Junior Championship Final was stopped by a red flag after a minor accident. At the restart, the young drivers continued to be nervous. Bernier took the lead, Bedrin and Alex Dunne (IRL – Exprit / TM Racing / Vega), then 2nd and 3rd, crashed and gave up. Mini’ took the opportunity to get closer to the leader and took 1st place at half way. He flew to a great victory, while Bernier was on the 2nd step of the podium. In 3rd place, Bortoleto had to resist the threat from Aron, then that of Zak O’Sullivan (GBR – FA Kart / Vortex / Vega) who completed the top five. Kirill Smal (RUS – Tony Kart / Vortex / Vega) made a strong comeback from 19th to 6th place.

Aron titled in front of Mini’

OK: Patterson flies ahead of the field

With pole position in Timed Practice, and the leader of the Heats, Patterson continued his winning celebration during the Final. He was in 1st place throughout the 25 laps and crossed the finish line with the fastest lap in the race and a 6.6” lead, confirming that he really was unbeatable this weekend. Thompson and Nielsen stayed in the podium positions without being able to threaten the victor’s supremacy. Luigi Coluccio (ITA – Birel ART / TM Racing / B’stone) finally passed Maloney for 4th position.

Although he was forced to retire on the first lap of the race, Hannes Janker retained his advantage and was crowned 2018 FIA Karting European Champion in OK ahead of Harry Thompson. Faced with a constant lack of competitiveness in Essay, Pedro Hiltbrand had to settle for 3rd place.