Title Fights in the DKM Stay Exciting Until the End 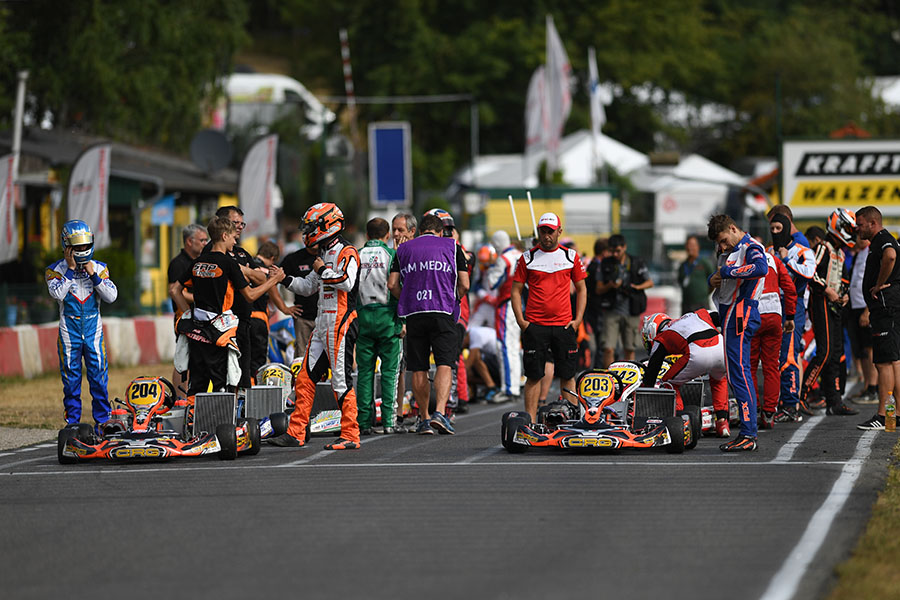 Kerpen. More than 160 drivers from more than 20 nations started into the semi-final of the German Kart Championship last weekend in Kerpen. The traditional Erftlandring caused some changes among the individual championships once again and now promises exciting finals at the end of August in Belgian Genk.

From summer heat to rain showers – everything was part of the fourth racing event of the season of the German Kart Championship with its grade series DKM, DJKM, DSKM and DSKC. 162 drivers from all over the world started at the ranked races on the 1.107m long Erftlandring. The track has got a long tradition in German motorsports. Seven-time Formula 1 World Champion Michael Schumacher started his career here as well as his brother Ralf and the current Ferrari Formula 1 driver Sebastian Vettel.

The individual ranked races offered high tension. The first decisions could have already been made in Kerpen. But there were several surprises, which postponed the fights for the titles to the final in Belgian Genk. The race victories went to Tim Tramnitz, Hugo Sasse (both DKM), Laurens van Hoepen, Zak O´sullivan (both DJKM), Stan Pex (DSKM) as well as Robert Kindervater and Alessio Curto (both DSKM).

DEKM with six races within the framework

The German automobile-, engine- and motorsports-channel MOTORVISION.TV is going to exclusively report on the events of the fourth race of the season again. All highlights are going to be summed up on Sunday, August 12th 2018 at 1:30pm in a 30-minute DKM-magazine.

All eyes were already on Emilien Denner (CRG Holland) from France before the races in Kerpen. After five of six possible victories, he already had the opportunity to win the championship prematurely in Kerpen. In the end everything went differently though: On Saturday, Denner was still among the front drivers on third place of the interim rankings. But he had to drop out of the first race early after a collision at the start and had to watch as Robert Kindervater (Birel Art Racing KSW) achieved his first victory of the season. He had taken the lead right at the start and defended it until the end of the race. The other places were quickly taken as well: Polesetter Alessio Curto (Valier Motorsport) took second place in front of Tobias Mähler (Kartshop Ampfing), Pawel Myszkier (Mach1 Motorsport) and Patrick Kreutz (RS Motorsport).

Curto already showed a strong performance during the course of the heats and tied in with this during the second race. During the beginning of the 23 lap-long race he fought his way past kick-off winner Kindervater. His opponents stayed in the wind shadow of the Sodi Kart driver, but couldn’t find a way past him. Patrick Kreutz (RS Motorsport) and Kindervater followed on second and third places. Both received time penalties though and fell back. New second winner was Mähler in front of Myszkier. Routine driver Andreas Dresen (Valier Motorsport) on fourth place caused lots of applause from the spectators. “I’m giddy with excitement. It’s like a victory to me that I ended up among the top five within the framework of the DKM with more than 50 years of age. The 23 laps were tough, but Kerpen is my track and I fully attacked”, he summed up. Kreutz was ranked fifth. Championship favorite Denner had another falling out, which caused new explosiveness on the overall list of rankings.

German driver Daniel Stell (DS Kartsport) achieved his first pole position of the year and drove among the front field during the heats as well. Fabian Federer (SRP Racing Team) took over the overall lead in front of Stan Pex (CRG Holland) though. The youngest son of the Pex family achieved the victory at the first final race. It was a long road for him until then though. All in all, nine drivers were really closely together and fought for the positions. The group was led by Marijn Kremers (Birel Art Racing KSW), but he fell way back due to an attack by Pex and had to hand over the lead to his fellow countryman. Pex was unstoppable until the end of the race then and won in front of Stell and Federer. The two BirelART-drivers Guust Specken and Andre Matisic (Solgat Motorsport) completed the cup ranks. A later time penalty for Stell caused another change then; new fifth winner was Jorrit Pex (CRG Holland).

After his strongly fought for victory at the first race, Stan Pex was unstoppable during the second race as well. The young Dutchman drove away from his competition and achieved the place on the highest point of the winners’ podium in the end. “This was a perfect weekend for me. Three years ago I achieved my first shifterkart-victory here in Kerpen. Today it’s a double victory”, he rejoiced at the finish line. His brother Jorrit had less reason to be happy: He had to drop out of the race due to a technical defect and lost important ground regarding the fight for the title. His strongest opponent Federer collected important points on second place and is going to start into the season final as the leading driver. German Alexander Schmitz (Renda Motorsport) crossed the finish line on third place, but a later penalty threw him back to sixth place. New third winner was Specken in front of local driver Julian Müller (Mach1 Motorsport) and Matisic.

The field of participants of the juniors is still very balanced after the races in Kerpen. There were already six winners of six races before the ranked races – now there are two more. Qualifying and the following heats were dominated by British Zak O’sullivan (Ricky Flynn Motorsport).

Things then got exciting during the first final race: More than ten karts collided immediately after the start and caused a race break. After a restart, the field formed up without any major problems and showed 18 eventful laps. In the beginning, pole setter O’sullivan was at the front. He didn’t manage to drive away from his opponents though and was under pressure early on. Laurens van Hoepen (Tony Kart Racing Team) took advantage of a gap, took over first place and had a considerable advance in front of the three Ricky Flynn Motorsport-drivers O’sullivan, Matthew Rees and Thomas Ten Brinke in the end. German Ben Dörr (TB Racing Team) ended up among the cup ranks as well on the strong fifth place.

The second race of the German Junior Kart Championship wasn’t any less exciting. This time, O’sullivan turned the tables. The driver from Great Britain fought his way back to first place and drove off considerably until the end of the race. Due to this success he re-took the lead on the overall list of rankings – his summary was accordingly content: “It was a really good race. I lost a little ground in the beginning from second starting position, but caught up quickly again and won the race. I’d like to thank my family, my team and my mechanic.” Regarding the fight for third position, Ben Dörr profited from a collision between Mikkel Hojgaard (KSB Racing Team) and Thomas Ten Brinke (Ricky Flynn Motorsport) – both of them had to drop out of the race. Nico Hantke (3G Racing), another German driver, followed behind Dörr on fourth place. Josef Knopp (TB Racing Team) came in fifth, ending up among the cup ranks for the first time.

The German drivers already showed their fondness for the 1.107m long Erftlandring during qualifying. Local driver Luke Füngeling (Valier Motorsport) achieved pole position. He had to let British Harry Thompson (Ricky Flynn Motorsport) pass him by during the heats though. The junior from the Red Bull sponsored squad won both races and was therefore among the favorites for the final races. Championship leader Zane Maloney (Ricky Flynn Motorsport) caused a big surprise. After two disastrous heats, he missed entering the final races and lost all chances of winning the championship.

During the ranked races, the 34 drivers offered lots of excitement. From pole position, Thompson won the start, but had to fend off strong attacks by his pursuers from the beginning. During the course of the 23 laps, the lead was exchanged between Thompson, Hugo Sasse (TB Racing Team) from Germany and Kas Haverkort (Zanardi Racing Team). In the end, Sasse won in front of Haverkort, Tim Tramnitz (KSM Schumacher Racing Team) and Thompson. Later time penalties for the leading drivers changed the results again though. New winner was Tramnitz in front of Niels Tröger (RTG Kartsport), Füngeling and Tijmen Van Der Helm (KSM Schumacher Racing Team). Winner Tramnitz was happy about his first DKM-victory in the end: “It’s a great feeling to be the winner now. The race was really close, in the end I was also content with second place. To have won now, is even better of course.”

After the lost victory at the first race, Sasse achieved his first victory in the DKM at the second race. The youngster started from seventh position and drove forward to first position within three laps. He then drove off considerably until the end of the race. “I’d like to thank my team and mechanic for the great support. Everything went perfectly and it was a great race”, the winner rejoiced at the finish line. Thompson and Haverkort showed great catching-up races as well. They collected important championship points on second and third places and therefore did some damage control after the setback of the first race. The top five were completed by KSM Schumacher Racing Team’s protégés Tim Tramnitz and Tijmen Van Der Helm.

The German Kart Championship’s big final is already going to take place in four weeks. The location is going to be in Belgian Genk again after a one-year-break and promises lots of excitement. There are several title favorites among all four grade series.