When racers say the sport is dying or there is no growth in the sport, they must be ignoring the efforts of the Briggs & Stratton #OperationGrassroots program. The fourth year of the Briggs Weekly Racing Series has reached the mark of over 2,600 drivers, with the goal of surpassing last year’s mark of over 3,000 combined. The Senior/Masters division has 1,675 combining the USA and Canada racers, while the Junior program is nearly across the 4-digit mark at 954.

A number of drivers are reaching their eighth event of the year, thus propelling them up the standings toward the top. Setting the bar for the year-end awards is Michiana Raceway Park driver Tim Roy. Seven of his results have a score of 30 or higher, that include six wins in eight races at the South Bend facility. His top rival in the series championship Linus Gugino, who sits ninth in the overall Briggs WRS standings despite earning a victory all year.

The track with the most drivers inside the top-10 is New Castle Motorsports Park with six calling the Kart Racers of America program home. Blake Korth leads the Briggs Senior standings at KRA with five wins on the year, sitting second in the Briggs WRS. John Ewing is the top Masters driver in the Briggs WRS in the third spot, and is second in the KRA championship with one win and a string of runner-up finishes. John O’Keefe, the KRA point leader, is the only other Masters driver in the top-10, sitting sixth behind KRA Briggs CIK point leader Drew Lansing. KRA has multiple Briggs 206 classes, and currently Lansing also holds the eighth spot in the Briggs WRS with his results in the Briggs Senior class. Evan McCorquodale is the sixth KRA name inside the top-10.

Travis Roderick represents the Lone Star State at the top of the Briggs WRS program. The Hill Country Kart Club driver is fourth overall, earning four wins in 2018 at the New Braunfels, Texas track. Completing the top-10 is Evan Stamer from the Gateway Kartplex facility in the SuperComp series. Stamer has just six races counted for 2018, so watch for the St. Louis-area driver to move up in the coming weeks.

Many of the Canadians are at the six-race mark on their season, thus why they are lacking in the overall standings. The Canada standings however has different providences represented this month with five different clubs/tracks holding spots inside the top-10. At the top remains the Edmonton & District Kart Racing Association (EDKRA) with experienced international racer Griffin Dowler taking over the top position after sitting second last month. Five in total hail from EDKRA with Whitney Stevenson in third, top Masters driver Greg Murphy fifth, Kevin Dowler ninth and Colby Wallace in tenth.

Top Manitoba Karting Association driver John Buzza is now second, not even listed in the top-25 in June. Stephen Bachalo followed Buzza up the ranks as well, now sitting in the fourth position. Francesca Pasubio is the lone driver from the Toronto Kart Club, dropping down the order to sixth. Mark Banks has put Saskatoon Kart Racers into the top -10, sitting seventh while Jordan Prior is now the lead driver from the Goodwood Kartways program in Ontario. Last month’s top Canadian driver Angelo Amorim fell to 11th in the standings.

Team USA remains at the top of the Junior standings, holding seven of the positions including the top-four. Stockholm Karting Center is represented in three of those positions, including new number one Hudson Tran. The Minnesota driver has four 29 results in six races, giving him a small nine point advantage. Last month’s number one driver Lanie Buice is down to second, representing Georgia Sprint Karting Association. Kiara Stai and Lukas Klimek complete the Stockholm roster.

Hundson Hamelin is the top driver for Team Canada, representing Toronto Kart Club. TKC has two inside the top-10 with Alivia Allen-Ricard in the sixth spot. The Kart Racers of America at New Castle Motorsports Park holds the next two positions with Sam Griffin and Kyle Ford. The lone west coast driver inside the top-10 is Carson Kragh from the Central California Kart Racing Association in Fresno. The facility will be hosting the upcoming IKF Grand Nationals in September where the Briggs 206 engine will be the focus of the class structure. Rounding out the top-10 is Canadian Logan Ploder from Goodwood Kartways. 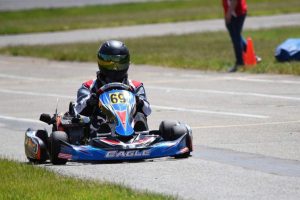 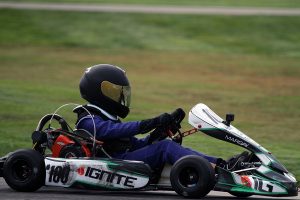