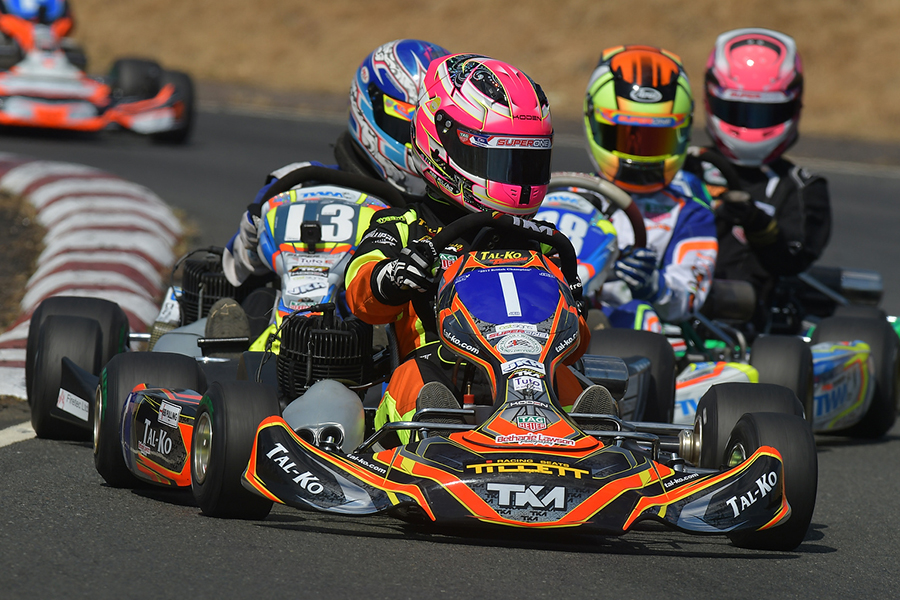 Super One hit high summer at Shenington, Oxfordshire at the weekend with spectacular racing for the Cadet, TKM and X30 classes.

US-based Sebastian Wheldon, son of the late Indycar racer Dan Wheldon, was competing in one of a selection of races in the UK this summer and is rapidly improving in the IAME Cadet class.

The next round will be at Rissington on 25th-26th August for Honda Cadet and the TKM and Rotax classes, while the X30s will be out again at Glan-Y-Gors on 8th-9th September.

Arvid Lindblad took pole in Timed Qualifying, 0.6s ahead of William MacIntyre and Sam Shaw a further hundredth back. However, MacIntyre was ahead after a heat win, with the other heat going to Shaw.

Lindblad won Final 1, taking over control of the lead pack from MacIntyre before halfway and taking the chequered flag two tenths ahead of MacIntyre, who had Maximus Hall on his bumper. In Final 2 Hall made the best start but Freddie Slater led most of the race before MacIntyre seized the lead on the last lap to win by less than a tenth.

Lindblad is four points ahead of MacIntyre in the Championship standings, with a 23-point gap to Maxwell Dodds.

With the Final 1 grid featuring some favourites with ground to make up, Rigby led most of the race apart from a brief period early on with Daniel Guinchard in control. However, Guinchard dropped back and Kean Nakamura-Berta pushed Rigby all the way before losing some time when attacked on the last lap. Micouris made it up to 5th and Bloch 7th.

Rigby was again the winner in Final 2 after overcoming Nakamura-Berta who led mid-race, but lost out in the last-lap battle where Bloch had made it over the line in 2nd but was penalised a lap which gave the position to Guinchard with Edward Pearson 3rd.

Rigby is now 14 points ahead of Guinchard in the standings with two rounds to go.

Abbi Pulling was 2nd in Qualifying behind Jack Nicholson but won both heats to take pole for Final 1, while Nicholson dropped back with a penalty in Heat 2.

Final 1 saw two red flags and the race eventually abandoned, with Pulling leading all six laps while Connor Kearney was close throughout.

In Final 2 Pulling led most of the way apart from a brief period with Archie Strong in the lead, but he later dropped to the back leaving Kearney, Morgan Kidd and Ben Watson to fight over 2nd which eventually went to Watson over a second behind Pulling.

Pulling is a huge 56 points ahead of Daniel Butterworth in the Championship with Kearney 3rd.

Sam Fowler qualified on pole in the biggest class of the meeting, just 0.02s ahead of E Plate holder Pete Newman. Fowler stayed ahead with two 2nd places in the heats, with the wins going to Newman, Chris Whitton and Joseph Reeves-Smith, but Newman dropping down the Intermediate Classification after problems in his other heat.

Fowler won Final 1, leading from lights to flag but never pulling away from Whitton and Reeves-Smith, while Newman made up eight places to 6th. Reeves-Smith won an exciting Final 2 which was a constant battle with Fowler, Max Goldsmith and Newman, with Fowler unfortunately not finishing.

Despite a relatively low-scoring Shenington, Adam Sparrow is leading the Championship by 13 points from Kristian Brierley, while Fowler and Reeves-Smith are in 5th and 6th.

Joshua McLean put it on pole in Timed Qualifying but the heat wins went to Joshua Rowledge and Ian Aguilera, with Rowledge on pole for Final 1.

The first Final saw a constant battle between Rowledge, Aguilera and Jessica Edgar with Aguilera ahead when it mattered to win by eight tenths. In Final 2 Edgar overcame Aguilera early on and led much of the race before Rowledge passed, and Aguilera retired a few laps from the end.

Clayton Ravenscroft qualified on pole in a session where the top seven were in the same tenth but problematic heats dropped him down to 11th on the Final 1 grid while Alex Lloyd took pole with two heat wins.

After starting 6th, Lewis Thompson took the lead from Nelson King near the end of Final 1 with Lloyd also having a shot in the lead in the early stages. Ravenscroft, Caden McQueen, Lewis Gilbert, Casper Stevenson also formed part of the lead group in a race full of suspense.

Ravenscroft gained five places to win Final 2 ahead of Thompson after tailing him for much of the race and overtaking five laps from the end. This time the two of them were out on their own, pulling away from McQueen in 3rd.

Ravenscroft now has a five-point lead over Gilbert with Dragan Pinsent further back in 3rd.

Joe Turney took pole in Timed Qualifying ahead of Morgan Porter and Oliver Hodgson who posted exactly the same time.

Hodgson then won both heats to put him on pole for the first Final. He led much of Final 1, but was attacked by Turney who led a lap, then in the latter half Sean Butcher came through to win by half a second.

Turney had his revenge in Final 2 where Hodgson led all the way with Turney close behind, until Turney pulled ahead to win on the last lap. Porter was the fastest man on the track but took 3rd too late to reel in the leaders.

Turney’s win has given him a 15-point lead over Porter, with Hodgson another seven points behind.