$70,000 in prizes and IAME International Final tickets on the line at New Castle 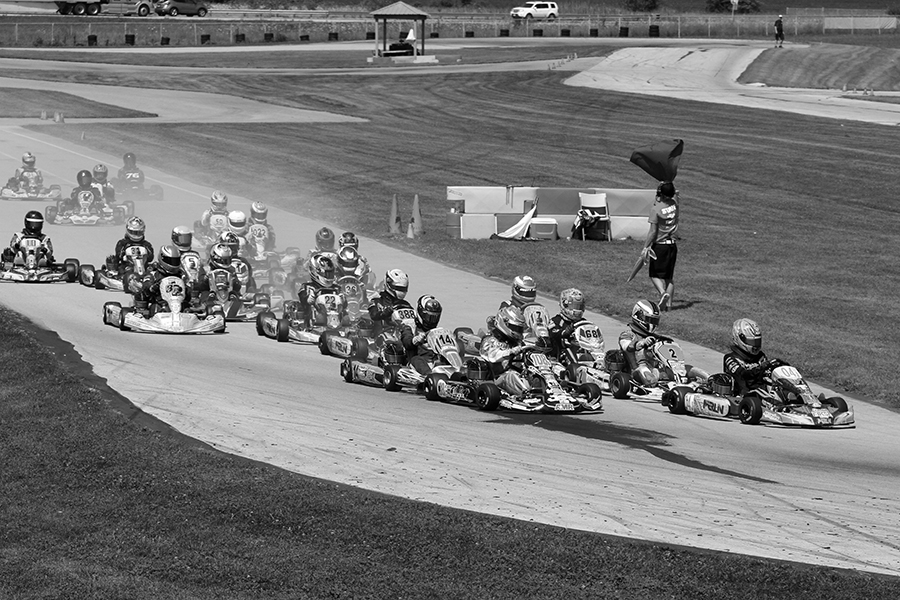 The 2018 United States Pro Kart Series presented by MG Tires, IAME USA East and Nitro Kart is set to close this weekend. The New Castle Motorsports Park in New Castle, Indiana will host the Hoosier Grand Prix with Round Five and Six contested around the 1-mile circuit. Roughly $70,000 in prizes is available on the weekend with the championship chases coming to a close in the seven IAME divisions, including four tickets to the IAME International Final, IAME engines and parts, and of course the custom USPKS champion ring.

The 1-mile New Castle Motorsports Park circuit is among the favorites in North America. Opening in late 2003, many national and regional programs have visited the facility located about 45 minutes away from the Racing Capital of the World – the Indianapolis Motor Speedway. With the SKUSA SummerNationals two weeks after, many competitors are using this weekend as a warm-up for the August event, with pre-entry numbers up to 144. The event record for USPKS came in 2015 with 178, while the series best at New Castle was in 2016 with 160 for the season opener. This year is the first for a six-round, zero drop championship. This means each and every session, especially this weekend, is vital to anyone’s title hopes and dreams. 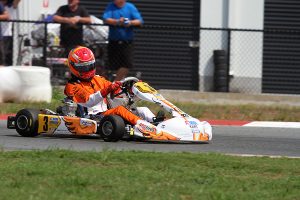 EKN continues its long-term partnership with the USPKS, providing unmatched Trackside Live coverage throughout the weekend and the season. The entire Hoosier Grand Prix will be available at the EKN Live page – www.ekartingnews.com/live – with USPKS announcer Tim Koyen providing the play-by-play call. Daily reports and updates on the EKN Social Media network will fill up your timeline throughout the weekend. We’re thrilled to have K1 RaceGear, Franklin Motorsports and CRG Nordam on-board as Broadcast Partners for our live coverage of the event.

The championship in the IAME Pro division is down to two drivers, with Brandon Jarsocrak and Austin Garrison at the point. Jarsocrak (KSNA / Kart Republic) swept the two rounds in Mooresville while Garrison (Fullerton) dominated the weekend in Ocala, only to have a win taken away on Sunday for a pushback bumper penalty. Jarsocrak holds the championship lead by 70 points over Garrison entering the weekend. Senior rookie Austin Schaff (FMS / Merlin) was runner-up to Jarsocrak at GoPro, and sits third with Ocala runner-up Armin Cavkusic (FMS / FA Kart) in fourth. Add in fellow Franklin Motorsports teammates Alex Bertagnoli (Kart Republic) and Maks Kowalski (Merlin), and the battle for a spot on the championship podium will be heated all weekend. 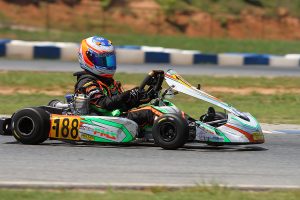 The advantage in the IAME Junior standings is in the hands of Nicholas Terlecki (Photo: EKN)

The point battle in the KA100 Senior division is even closer with the two weekend winners going head-to-head. Zach Hollingshead used home track advantage to double up in Ocala while veteran TJ Koyen grabbed his first series victories during the GoPro weekend. Hollingshead (OGP / Tony Kart) leads by a scant 39 points over Koyen (Innovative / Exprit). Josh Hotz (FMS / Merlin) is carrying the momentum with him, earning the Franklin Motorsports Throwdown victory at Norway two weeks ago, sitting third in the standings. Colton Ramsey (Innovative / Kart Republic) is fourth with veteran Adam Crepin (Tony Kart) in fifth.

The top five drivers in the IAME Junior championship have zero wins and only two podium finishes. That is due to the two different winners on the year having competed in only one event. Tyler Gonzalez won both rounds in Ocala with Jeremy Fairbairn sweeping the Finals at GoPro. Fairbairn (MDD / Kosmic) is scheduled to compete at New Castle, only 243 points out of first. Gonzalez (CRG Nordam), sitting seventh in the standings, could be an at-track entry, making things interesting. Leading the title chase is Junior rookie Nicholas Terlecki, holding a 65-point advantage over Franklin Motorsports / Merlin teammate Kyle Thome. Aaron Benoit (J3 / CompKart), Lucas Smalec (FMS / Merlin) and Matthew Christensen (FA Kart) round out the top-five. 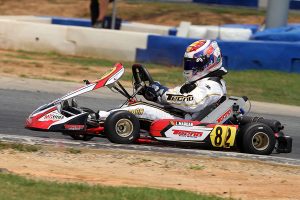 Inaugural KA100 Junior winner Jacob Graham (Kosmic) has not relinquished the top spot in the championship chase. Graham leads Donald Whorton II (FA Kart) by 93 points heading into the two-round season finale. Erikson Evans (Kosmic) is only back by 100 points with Round Two winner Spencer Lofton (Tony Kart) and Westin Workman (CompKart) waiting in the wings.

Added just days ago was a ticket to the IAME International Final in France for the IAME Masters champion. The class, making a return to the program since the inaugural season in 2013, has been a very exciting four rounds of racing up to now. Four different winners and multiple podium finishers has put the championship into a whirlwind. Entering the weekend, Round Three winner Laurentiu Mardan (Tecno) leads the championship by 160 points over Danny Robertson (OGP / Tony Kart). Round Two winner Todd Shambo (FA Kart) is third, only five points back of Robertson. Scott Roberts (SCR / Tony Kart) dominated the Final in Round Four, and if not for two DNF finishes in Ocala, could be leading the title chase. He trails by 215 points, needing a lot of help. It is not out of the question with the way the season has gone. Former point leader Scott Falcone (KSNA / Formula K), Ocala front-runner Jonathan Silva (CompKart) and GoPro podium finisher Scott Kopp (Innovative / Exprit) will keep things exciting. Add in new Masters driver Darrin Marcus (Fullerton), and there is no guessing what will happen. 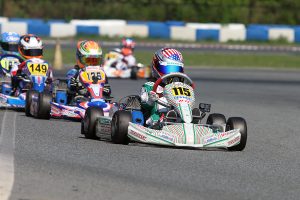 The fourth ticket to be awarded on the weekend goes to the Mini Swift champion. This category has seen some crazy finishes with three race winners not currently in the title chase. The point lead resides with California driver Kai Sorensen (Tony Kart), with a best finish of runner-up on Sunday in Ocala. Christian Miles (Kart Republic) is the only race winner in the hunt entering the weekend, trailing Sorensen by 41 points. Noah Baker and Jeremy Fletcher (Kart Republic) are nearly tied for the third spot with Jace Park (Parolin) in fifth. Race winners Adam Brickley (Energy), Sebastian Ng (Nitro Kart) and Paul Bocuse (Kart Republic) will be in attendance in New Castle along with a number of top Cadet drivers from across the country.

The championship in Micro Swift is Ben Maier’s to lose. Maier (Nitro Kart) has swapped wins with Caleb Gafrarar (Parolin) in the first two events. Gafrarar will not be in New Castle, thus, leaving Maier with a 193 point advantage over Gavan Boschele (Nitro), who is not listed on the pre-entry sheet. Next in line is Cameron Brinkman (Merlin) at 282 points back. Maier is coming off two wins in Norway, and remains the driver to beat in the category. Nicholas Daniell (FA Kart) sits fifth in the standings.