The challenge of mid-summer heat continued this past weekend for the Maxxis 4 Cycle Sprint Series at Carolina Motorsports Park in Kershaw, South Carolina. However, 90+ degree temperatures did not deter drivers from making it one of the most exciting and competitive weekends yet. 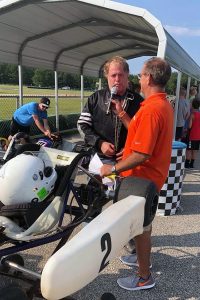 Headlining the charge to the front was Georgia driver Austin Williamson, taking his first win of the season in the LO 206 All Pro class. Other winners included Barry Hastings, checking in for his first Masters win of the season over point’s leader Joey Miller, while Cameron Weinberg heads to the season finale with a slim 2 point edge over Owen Lloyd in LO 206 Cadets, with his win on Saturday in the class. Aren Lloyd took the LO 206 Senior win, keeping the points tight with brother Tyler, while Elmer Edmunson and Jaydyn Wilson scored respective wins in the Brads Heating and Cooling LO 206 Junior and Kid Kart classes.

For Williamson, his day in the All Pro class began with the heat race win, thus placing the driver on the pole for the main event. Williamson would lead every lap of the 15 lap distance, fending off occasional challenges from the Lloyd racing duo of Tyler and Aren, with the top 3 finishing under a blanket. All Pro Points leader Tyler Swann came home fourth in the event. Swann still has a comfortable margin in points, with the Lloyds tied for second, and Williamson currently fourth.

The Diversified Plumbing Services LO 206 Masters Class found quite a few changes for the lead throughout the event, with Hastings eventually able to secure his first win of the season. After contact was made early in the event with leaders Chris Carroll and Tyson Swann, Joey Miller saw his opening, and took it. Laps later Hastings slowly chased Miller down, grabbing the lead, and on to his first win of the season. Miller came home second with Brad Farmer, Carroll, and Swann rounding out the top 5. With his win, Hasting has pulled to within 3 points of Miller, with the point’s finale coming August 25 at Barnesville, Georgia. 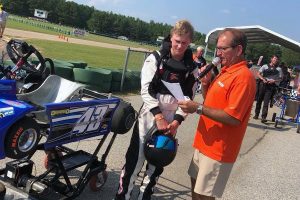 Austin Williamson sharing his thoughts following the All Pro event

Race after Race, the Brads Karts and Parts LO 206 Cadet Class continues to impress, with some of the best young talent in the business. Following an early race dual with Heat Race winner Owen Lloyd, Cameron Weinberg was finally able to edge by for the lead, eventually being able to stretch out an advantage, while Lloyd battled with Lanie Buice, Carson Weinberg, and top qualifier Peyton Bridges. The end result would be Weinberg taking his second win of the season, the first also taking place at Kershaw. Buice, Lloyd, Carson Weinberg, and Bridges completed the top 5 with Cameron Weinberg bringing a 2 point advantage to Barnesville with him next month.

Just as impressive as the Cadets over the weekend were the Andy Jones Motorsports LO 206 Senior class drivers, as the top 3 of Aren and Tyler Lloyd, as well as Jacob Duvall, spent many laps in 3 wide action for the better part of the 15 lap event, thrilling the fans on the fence. In the end, it was Aren Lloyd making it a Kershaw sweep for the season, thus keeping the points battle tight. Tyler Lloyd came home second, sporting 4 point edge over Aren, with Duvall, Austin Williamson, and Tyler Swann rounding out the top 5. 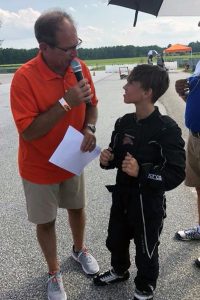 As mentioned, tight points battles will be the order of the weekend August 25 when the series will crown its champions in Barnesville, Georgia for Race #6.

The series recently announced a date and venue change to the Grand National event. Competitors will have a chance to run for a Grand National award, as well as bragging rights Nov 16 and 17 at 103rd Street Sports Complex in Jacksonville, Florida for the inaugural Maxxis 4 cycle Grand National Championship. More details will be available shortly.