Talented Junior will return next weekend 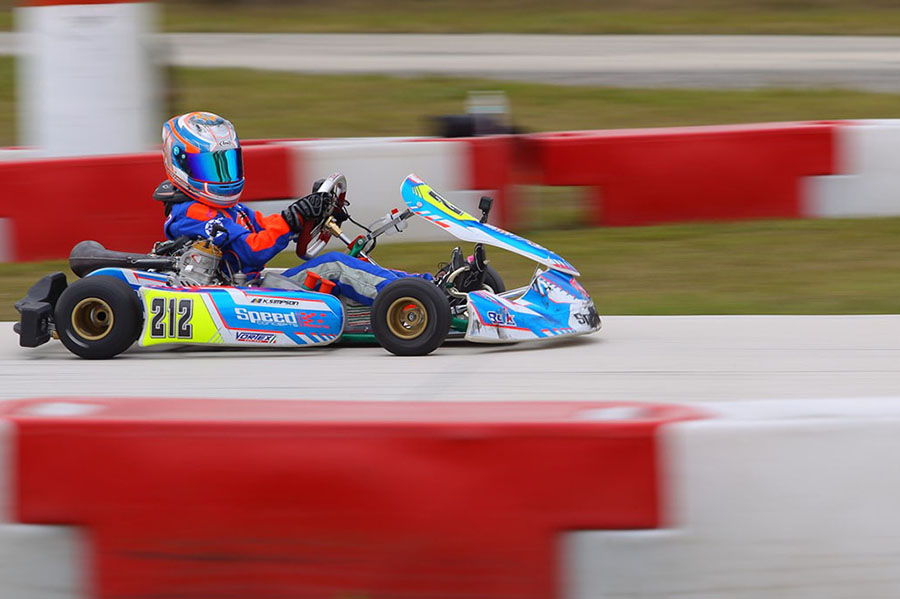 Set to make his return to karting after nearly a five-month hiatus, rookie Junior driver Kyffin Simpson will be back in the saddle next weekend at the United States Pro Kart Series (USPKS) event in New Castle, Indiana. Taking on the IAME X30 Junior field, Simpson will pilot a Speed Concepts Racing prepared Tony Kart in his first event since March around the ultra-fast New Castle Motorsports Park facility.

“I am excited to get back in the kart,” expressed Simpson. “My last race weekend was a USPKS event and I did fairly well. I am hoping the time off is not going to be an issue, but Mike, Alex and myself have set realistic goals and I will work hard to achieve them.”

Taking advantage of the Speed Concepts Driver Coaching program offered by Alex Speed as well as learning from other Junior drivers in the program, Simpson was able to claim a pole position, heat race win and a pair of podium results in his most recent karting outing, the USPKS event in Ocala.

“Leading up to the race back in March, Kyffin was under the weather but he wanted to race,” explained his father, David Simpson. “He is passionate about competing and soldiered through the weekend, gaining his best results to date as a Junior. Shortly after that weekend, it all went downhill and we needed to take some time off. It was devastating for Kyffin as all he wants to do is race, as well as heartbreaking for our family to watch him suffer through the illness.”

Taking time off and not rushing back to the seat has allowed Kyffin to get himself to 100%. Planning a return at the Rotax US Open a few weeks ago, the Simpson family put that return on hold to give Kyffin that extra time he needed to be fully prepared.

David Simpson added, “We are ready to go. We are excited and we can’t wait. Mike and Alex run one of the best, if not the best program in the country and they build proper drivers and racers out of our kids. Kyffin has only been racing in the USA for less than two years and they have turned a rookie into a competitive driver. Kyffin is looking forward to the rest of the year.”

Following his USPKS return July 27-29 and if all goes as planned, Kyffin will rejoin the team two weeks later for the final round of the Superkarts! USA Pro Tour at the New Castle Motorsports Park.