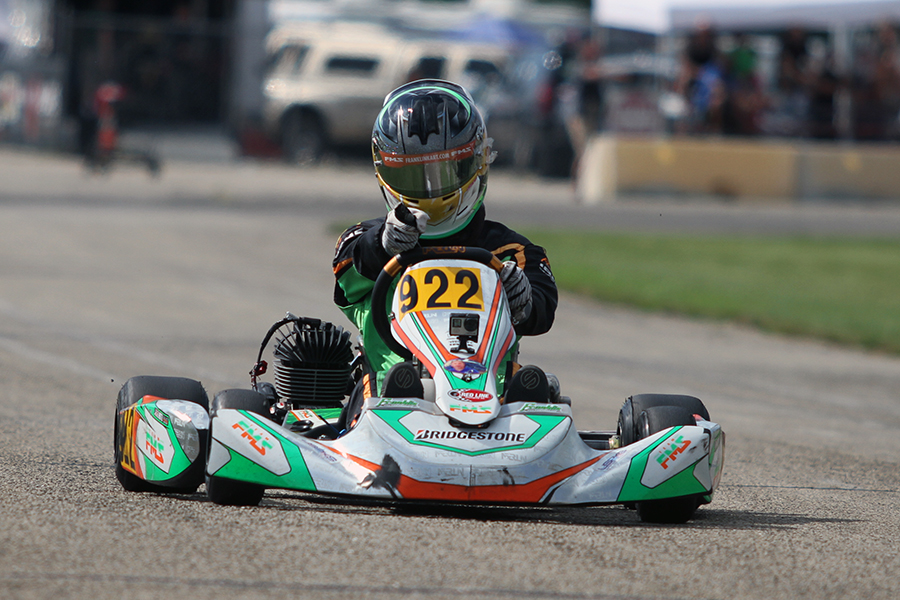 The eighth round of the 2018 WKA Manufacturers Cup Series program went into the books Sunday under sunny skies in Norway, Illinois. Nine different categories contested the Concept Haulers Motor Speedway all weekend, battling challenging weather conditions on Saturday before soaking in the sun all day on Sunday. Seven drivers in total were able to repeat on Sunday their wins on Saturday, while Josh Hotz etched his name onto the ‘Throwdown’ sword.

This weekend was a highlight for the new KA100 Senior category, with cash prizes on the line Saturday thanks to IAME USA East, while Sunday served as the seventh running of the ‘Throwdown’ presented by Franklin Motorsports. The same three drivers from Saturday up front were in the fight on Sunday. Saturday winner Michael Geringer (Merlin) set fast time in qualifying while Dakota Pesek (Top Kart) jumped up to the top spot in the Prefinal. They continued to fight in the Final, with Pesek out front early. Hotz was able to grab the lead on lap seven, bringing Geringer with him. Hotz was able to get away with fast laps of the race, leaving Pesek and Geringer to fight for second. At the checkered, Hotz scored the victory and the coveted ‘Throwdown’ sword. On the final circuit, Pesek was able to muscle his way by Geringer for the second spot on the podium. Michael Paterno (Kosmic) ended up fourth, just ahead of Emory Lyda (Merlin). 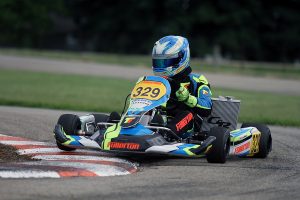 Austin Garrison solidified his run at the IAME Senior championship with a win on Sunday (Photo: EKN)

IAME Senior championship leader Austin Garrison made it a complete sweep on Sunday, earning his fourth victory of the season. Garrison (Fullerton) went unchallenged all day, going wire-to-wire for a perfect end to the weekend. Colin Neal (Tony Kart) was not off pace much, but lost space on the opening circuit that cost him a chance to challenge for the victory. Elliott Budzinski (Kosmic) ran third with Terrin Odom (Top Kart) in fourth.

It was an impressive weekend for Arann O’Brien (Energy) by grabbing both victories in the Yamaha Senior. Michael Paterno (Kosmic) found the extra speed overnight, grabbing fast time in qualifying and earning the Prefinal win. He and O’Brien ran away in the Final, with Paterno at the point for the first 13 circuits. O’Brien took over the lead and held Paterno at the line by 78 thousandths of a second. Meghan Peri (FA Kart) beat out her brother Hunter Peri (FA Kart) for the third step of the podium with Geoffrey Crutchleo (Praga) in fifth. 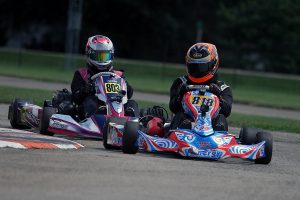 Arann O’Brien doubled up on the weekend in Yamaha Senior (Photo: EKN)

The IAME Junior class seemed to unfold as it did on Saturday. This time, championship leader Josh Green (Kosmic) was the driver to beat early on the day, posting fast time in qualifying and winning the Prefinal. Saturday winner Jeremy Fairbairn (Kosmic) was among the front runners, retiring early once again in the Prefinal to start 10th. He quickly knifed his way forward, up into the second spot by lap eight. He ran down Green and took over the lead on lap 14. From there, Fairbairn went untouched to the checkered flag for his second victory of the weekend. Green held off Matthew Duncovich (Kart Republic) for the third spot with Tyler Ferris (Top Kart) and Amelia Cangialosi (Tony Kart) completing the top-five.

Kaden Wharff (Top Kart) made himself the driver to beat in the championship chase for the Yamaha Junior division thanks to his fifth victory on the season. It was not a perfect day, with Zach Collins (Top Kart) securing fast time in qualifying by two hundredths of a second over Tyler Ferris (Top Kart). Wharff came from fourth on the grid to grab the Prefinal win over Ian Quinn (Kosmic). In the Final, Wharff led all 18 laps unchallenged to the checkered flag for the victory. Ferris ran second with Quinn having contact twice during the race to drop him down the order. Joshua Carlson (Kosmic) took the third step on the podium over Tyler Lemp (CompKart) with Taylor Maas (Merlin) bouncing back to end up fifth. 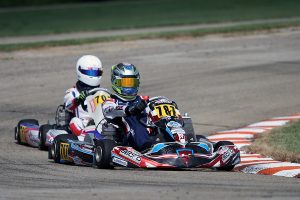 Another impressive run in the Final gave Jeremy Fairbairn his second victory of the weekend in IAME Junior (Photo: EKN)

It was a wild day in the Mini Swift division with all seven drivers in the hunt all day. Jeremy Fletcher (Kart Republic) set fast time in qualifying with the top-four separated by just 99 thousandths. Fletcher and Brent Crews (Nitro Kart) were fighting for the win in the Prefinal when Fletcher spun on the final circuit, giving Crews the win. Fletcher fought his way forward in the Final and was fighting for the lead with Danny Dyszelski (Parolin) and Crews. Dyszelski was shuffled back and eventually retired. By then, Crews and Fletcher had secured the top two spots and ran away. On the final lap, the two were fight for the victory when they made contact. This allowed Annie Rhule (Energy) to slip past both in the final corners to grab her first victory of the season. Fletcher recovered for second with Thomas Annunziata (Nitro Kart) following in third. James Overbeck (Nitro Kart) dropped Crews to fifth.

Ben Maier left no questions about who’s championship it is to win. Maier (Nitro Kart) dominated the day in Micro Swift for a clean sweep of the day. Maier led wire-to-wire on the day for his sixth victory of the season. The battle all day was for second with Miles Murray (Nitro Kart) earning his first WKA podium. Aryton Grim made it a Nitro Kart sweep of the podium with Garrett Andexler (PCR) in fourth and Hoyt Mohr (Nitro Kart) in fifth. 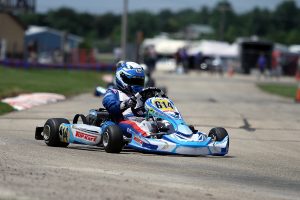 The Yamaha Sportsman class went down to the wire with four drivers in the hunt. Saturday winner Danny Dyszelski (Parolin) was able to hold off the challenges in the final laps to secure his second victory of the weekend. Adam Maxwell (Top Kart) was able to grab second away from Prefinal winner Annie Rhule (Energy) with Kasey Williams (Praga) just short of the podium. James Overbeck (Nitro Kart) completed the top-five.

Beckham Lewis went unchallenged on the day in the Kid Kart division. Setting fast time in qualifying and winning the Prefinal, Lewis drove to a 15-second advantage in the Final. Hudson Floyd and Sam Tutwiler joined him on the podium with Holden Harder and Colton McQuade completing the top-five.

The series resumes after taking the month of August off with a trip to the New Castle Motorsports Park in New Castle, Indiana on September 14-16.