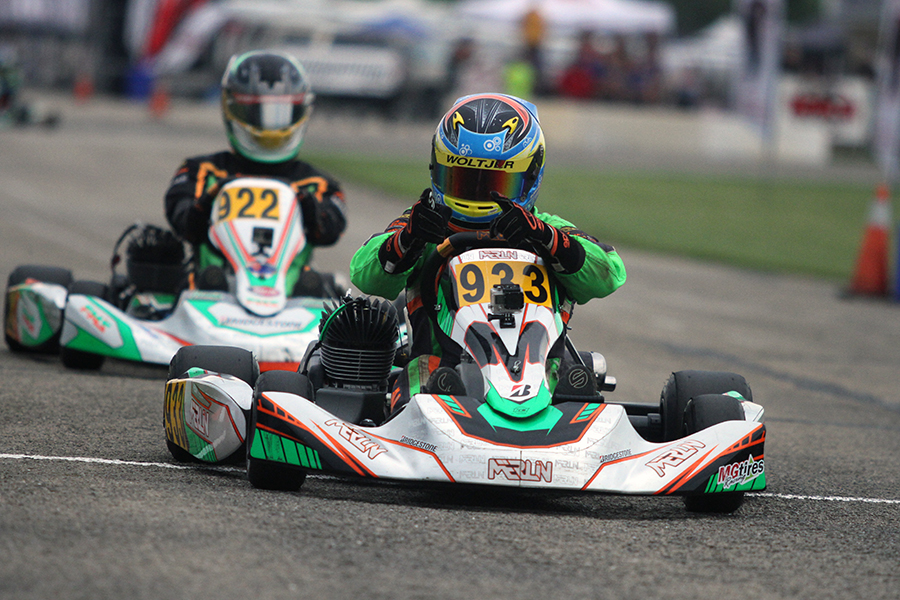 It was a challenging day at the opening round of racing for the 2018 WKA Manufacturers Cup Series program at the Concept Haulers Motor Speedway. Nearly every time the program visits the Norway, Illinois facility, weather is always a factor. After a storm rolled through during the morning hours to delay things, and rain hit the area for a brief time soon after, the effort of the staff and racers got the day back on schedule. A full day of action including qualifying, two heat races and a main event made for non-stop racing.

The KA100 Senior category is getting some extras on the weekend, thanks to the event serving as the 2018 ‘Throwdown’ presented by Franklin Motorsports and IAME USA East. Josh Hotz (Merlin) set fast time in qualifying but it was Michael Geringer (Merlin) who controlled the day. Geringer grew up racing at CHMS and continues to have the upper hand on the competition. Geringer won both heat races, leading the field to the green flag for the Final. Hotz and Dakota Pesek (Top Kart) made up the lead group. Pesek and Geringer went back and fourth for the lead early on until they settled down. With two laps remaining, Hotz slid inside Pesek for second in turn three, with Pesek running wide on exit. This gave Geringer enough room to drive away to the victory, cashing in on the $200 check for the victory. Hotz finished second while Pesek held on for third, grabbing $100 for fast lap of the race. Defending ‘Throwdown’ winner Killian Keaveny (Merlin) was fourth with championship leader Blake Hunt (Fullerton) in fifth. 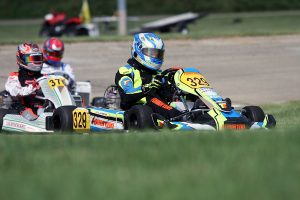 Austin Garrison added to his championship lead in IAME Senior with victory on Saturday (Photo: EKN)

Austin Garrison grabbed his third victory of the season to extend the point lead in the IAME Senior division. The day was hard fought with both Elliott Budzinski (Kosmic) and Colin Neal (Tony Kart) on his heals. Garrison (Fullerton) set fast time in qualifying and won Heat #1. Budzinski was able to grab the win in Heat #2 to even the score going into the main event. It was Neal that put up the hardest fight with Garrison, taking the lead for one lap, only to have Garrison reclaim the position. Neal and Budzinski went back and forth for second, until Neal secured the spot. They were unable to run down Garrison in the closing laps, as he took his third victory of 2018. Neal ended up second with Budzinski third. Terrin Odom (Top Kart) was fourth with Meghan Peri (FA Kart) in fifth.

The Yamaha Senior class welcomed a larger field, and the fight for the win went down to the wire. Michael Paterno (Kosmic) came away with pole position for the main event despite not winning a heat race, starting ahead of race winners Geoffrey Crutchleo (Praga) and Arann O’Brien (Energy). It was O’Brien and Paterno that were able to get away at the beginning of the Final. Paterno led the first 10 laps until O’Brien took over. The top qualifier held on through the final laps for his first WKA victory. Paterno grabbed fast lap, but had to settle for second. Crutchleo won the fight for third ahead of Hunter Peri (FA Kart) with Meghan Peri (FA Kart) in fifth. 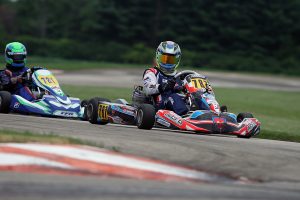 Jeremy Fairbairn came away with the victory in IAME Junior (Photo: EKN)

The IAME Junior category kept things exciting throughout the day. Connor Ferris (Top Kart) set fast time in qualifying, with Jeremy Fairbairn (Kosmic) coming up for the opening heat race win. A flat tire on the opening circuit of Heat #2 put Fairbairn on the sidelines, allowing Kaden Wharff (Top Kart) to grab the win and the pole position for the Final. Fairbairn started the main event from fifth after the combined points, and quickly jumped into the lead group. He and Ferris were able to break away from the field with the Top Kart driver at the point. Fairbairn took over the lead on lap eight, driving away to victory after holding off Ferris to the checkered flag. Wharff was alone in third with Amelia Cangialosi (Tony Kart) crossing the line in fourth. She was penalized for contact, moving Bryce Aron (Kosmic) to fourth ahead of Dylan Christie (Kosmic).

It was the fourth straight Saturday victory for Kaden Wharff (Top Kart) in the Yamaha Junior division. He and Ian Quinn (Kosmic) were the class of the field all day. Each took a heat race win, with the edge going to Quinn for a better qualifying result. Wharff however grabbed the lead from the start, and led all 16 laps for the vicotry. Quinn held off top qualifier Tyler Ferris (Top Kart) for second with Zach Collins (Top Kart) and Taylor Maas (Merlin) completing the top-five. 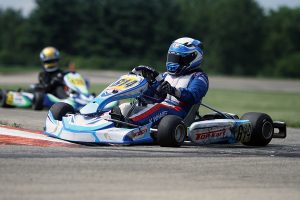 A fourth victory on the season for Kaden Wharff in Yamaha Junior (Photo: EKN)

Mini Swift championship leader Brent Crews (Nitro Kart) saved the best for last, scoring the main event victory on the day. Crews never finished a session in the P1 position with Jeremy Fletcher (Kart Republic) taking to honors in qualifying while Thomas Annunziata (Nitro Kart) and Annie Rhule (Energy) grabbing the heat race wins. Crews started in the fourth position, and worked his way to second behind Fletcher. He sat there until the final circuit, diving deep into turn one to grab the lead. From there, he held on to the checkered flag for the victory. Fletcher finished second with Danny Dyszelski (Parolin) in third. Rhule was fourth with James Overbeck (Nitro Kart) in fifth.

After getting shut out at the Pittsburgh weekend, Ben Maier (Nitro Kart) picked up his fifth win of the season after a challenging day. Maier qualified first but was shuffled back in the opening heat and retired while leading in Heat #2 after breaking a chain. Aryton Grim (Nitro Kart) took control and won both heat races. Maier started sixth in the Final, and drove his way forward to the lead, eventually pulling out to a four-second advantage. Grim won the fight for second, his best career finish, with Cameron Myers (Margay) in third. Miles Murray (Nitro Kart) came up just short of the podium with Hoyt Mohr (Nitro Kart) in fifth, posting fast lap of the race. 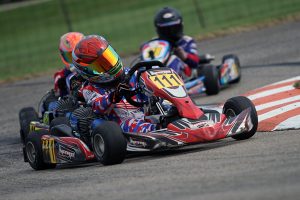 Annie Rhule nearly had a perfect day and her first victory of the season in Yamaha Sportsman. Rhule (Energy) set fast time in qualifying and won both heat races. In the Final, she was pressured by Kasey Williams (Praga) throughout the 16-lap event with Danny Dyszelski (Parolin) waiting in the wings. On the final circuit, Rhule drifted wide on the exit of the hairpin, with Dyszelski going from third to first. He held on at the checkered flag by 56 thousandths of a second for his fifth straight class victory. Rhule and Williams joined him on the podium with James Overbeck (Nitro Kart) in fourth and Adam Maxwell (Top Kart) in fifth.

Beckham Lewis had a great day in Kid Kart, earning his third straight series victory. Lewis drove away in the 16-lap Final to an eight-second advantage. Colton McQuade won the battle for second over Chase Groh. Hudson Floyd and Jacob Schaible completed the top-five.