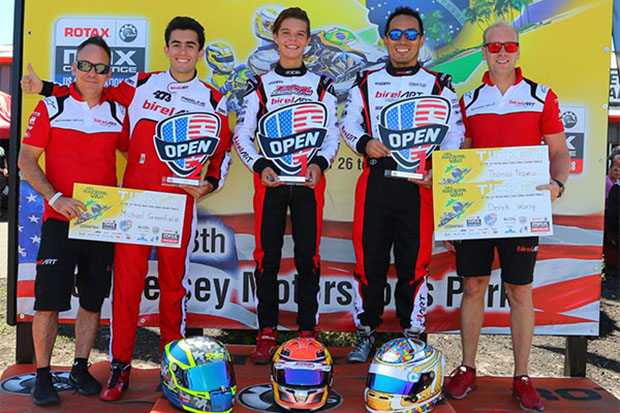 US Open of New Jersey commenced during last weekend at the plus one minute circuit fielding drivers from across North America and around the world to earn an entry to the Rotax Grand Finals hosted in Brazil. With the added element of ‘standard’ engines, they were drawn by lottery for all competing drivers. The Birel ART Army carried 18 pilots from across all available Rotax categories ready to fight for the coveted titled of US Open Champion.

Junior Max pilots Mackenzie Clark, Thomas Nepveu and Cooper Becklin qualified P5, P6 and P20 respectively in a very tight field, but it was Nepveu who took the Super Pole. In the heats, Clark would suffer some adversity but take P3 in the heats, and even managed a P7 in the final. After some confident and consistent results in the heats for Nepveu (P3, P3, P2), would earn the victory and secure the title of US Open Junior Max Champion. Team mate, Cooper Becklin, continued to demonstrate growth and development with a solid P10 in pre-final and P15 finish in the final. Cooper’s younger sister, Lucy, would make her debut (national) event in Micro/Mini, always improving her lap times every session.

Senior Max proved to be difficult with only a few tenths separating the top 15 drivers. Tavella and Hooton showed great speed but were struggling with having luck on their side. Hooton was able to push to P5 in the final, but was taken out finish P18. Tavella had an impressive final after coming from dead last in the final to finish P10. Rylance was able to conquer the top 10 during the event, but eventually came home with P16. Hayley Lederer and Jack Phelps added some experience to their resume at this high-caliber national event.

DD2, a category that PSL and Biel ART have notoriously dominated, saw Tyler Greenfield earn the pole and Vice Champion title, claiming a Grand Final Ticket along the way. David Greco, who has been strong in all gear-box categories, was the fastest driver all weekend taking the Super Pole and heat wins, but was taken out in the pre-final while leading, effectively ending his weekend. Ivana Cetinich put in a solid effort, and Issac Marritt ended the final with a great P4 finish.

DD2 Masters, was tough, with all the big names in North America competing under the same tent, on the same chassis with out-of-the-box engines. Australian driver Scott Howard, was able to secure a perfect score across all three heats while his team mates battled. Derek Wang claimed pole in the qualifying while there was a consistent swap between the drivers in the top 4 all weekend long. In the final, Derek would make a move on his team mate, and scored the win in the last corner of the last lap in the final. In Rotax Masters, Chris Wallace was able to secure a top 10 finish.

“This was a great format to begin the re-growth of the Rotax platform again, and demonstrate the consistency and economic benefits to the racers. I’m very happy we were able to accommodate so many drivers from across North America, and provide them the materials and knowledge necessary to be in the front. A huge thanks to all our drivers, partners and Rotax for the entire race weekend.” – Dominic Labrecque

Birel ART North America (PSL Karting) is the National Importer and Distributor of Birel ART products and accessories, including Ricciardo Kart, Kubica Kart and Freeline accessories. Visit www.pslkarting.com to find a retailer near you. Follow our racing team and product updated via our social media @pslkartingofficial.