Yu and Musgrave repeat for Round Four of Superkarts! USA flagship regional program 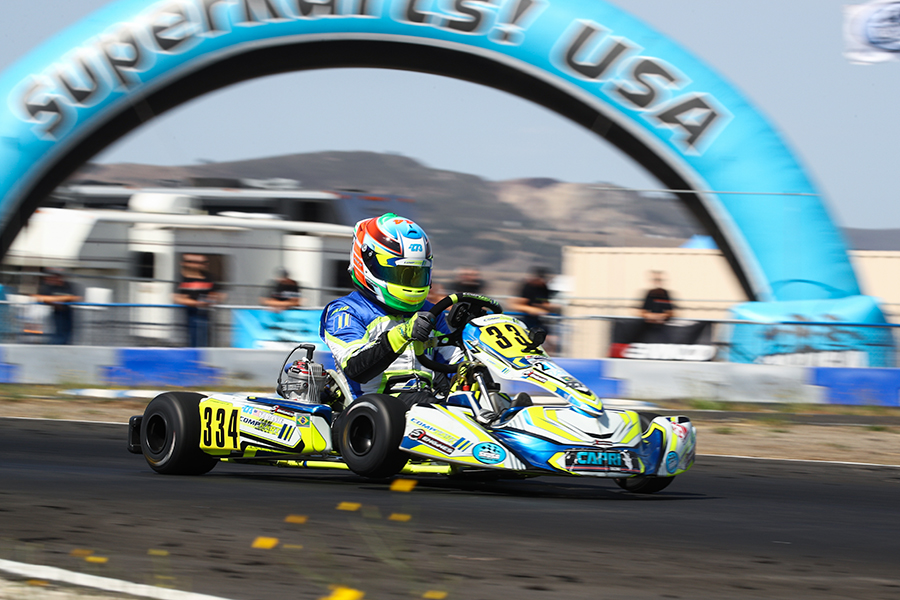 The second half of 2018 is upon us with the summer season heating up. The California ProKart Challenge hosted the fourth round of the 2018 season on July 6-7 at the Santa Maria Karting Association facility in Santa Maria, California. Racers of the Superkarts! USA flagship regional program contested the 12 categories featuring the IAME and Honda powerplants, taking to the 7/10-mile course situated on the grounds of the Santa Maria Airport, just minutes away from the Pacific Ocean. A number of drivers added to their win total for the season, helping to shape up the championship chases even further as the second half of the series begins. 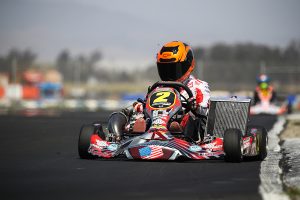 For a fourth straight event, Billy Musgrave swept the action in the Mad Old Nut S1 Pro Stock Honda class. The 2017 SKUSA SuperNationals winner has been unstoppable at the regional level, earning another perfect score in the championship chase. The only driver to get close to Musgrave all day was Hunter Pickett. The former SKUSA Pro Tour race winner, however, was removed from the results due to a technical infraction, promoting last year’s Santa Maria winner Matias Podboj to the second step of the podium – with S1 rookie Jason Pettit earning a second straight third-place finish. Robert Heck Jr. and Peter Abba completed the top-five.

There was not an easy bet as to who would come away with victory in the Phil Giebler Racing X30 Senior division. Billy Musgrave, running double duty all season, grabbed his second fast time in qualifying on the season over Joseph Daniele and Dante Yu. Musgrave retired on lap two of Heat #1, with Yu taking over and leading the field to the checkered flag. Daniele fought back in Heat #2, taking the lead on the opening circuit and leading all 10 laps for the win. Meanwhile, Musgrave fought from the back of the 24-kart field to end up sixth. Daniele led the opening six laps until Yu took the reins, leading the remainder of the Final to score his second straight victory. Musgrave continued moving forward, slipping past Daniele late in the race to grab the second step of the podium. Sonny Cervelli crossed the line in fourth, but was penalized two positions for blocking, elevating Edward Portz to fourth and Ethan Barrett to fifth. 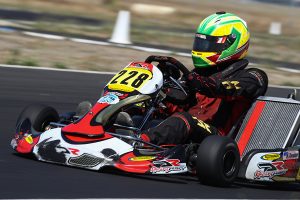 Swiss-Micron S2 Semi-Pro Stock Honda championship leader Keawn Tandon had yet to win in 2018 until this weekend. Tandon came through in the main event to score his first victory and maintain the top spot in the championship. Round Three winner Royal McKee set fast time in qualifying before going on to win the opening heat race. Heat #2 saw Prescott Campbell grab the point and the win. An issue during the first circuit of the Final put Campbell on the sidelines, allowing McKee to take back control. Tandon came from deep in the field with fast laps of the race, taking over the point and going on to score the victory by 3.8 seconds. Worawong Komarakul followed him through for second and his best result of 2018. McKee settled for third ahead of Round One victor Dean Heldt and Garrett McKelvie.

Rob Logan added a second victory on the season in the Doran Motorsports Group S4 Master Stock Honda class. Round One winner Robert Marks began things on top with fast time in qualifying. Logan responded in the opening heat with the holeshot to lead all 10 laps for the win. Championship leader Mike Mantel was right there in second, leapfrogging over Logan in the second heat for the race win and bringing Nick George with him. Mantel led the first five laps of the Final until Logan took control, leading the rest of the distance for a second straight main event victory. Marks fought his way back up to second, with George working past Mantel for the third step on the podium. John Crow added a third victory to the season in the Musgrave Racing Company S4 Super Master Stock Honda category. Crow swept the action on the day, earning a perfect score for the third straight time, out-running Darrell Tunnell and Carl Lewis in the main event. 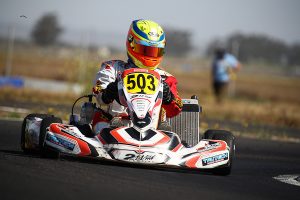 Nick de Graaf landed his third victory of the season in the Rolison Performance Group X30 Master class to extend his championship lead. It was a sweep of Round Four; however, Carlos Calderon kept it close all day long. Calderon stole the fast lap bonus in the main event, but the victory went to de Graaf – with Steve Martin completing the podium. It was a great battle all day in the new Empire Karts X30 Super Master division. Jon Persing set the tone to begin the event, posting fast lap in qualifying and winning Heat #1. Round Three winner Stuart Hayner came away with the win in Heat #2, and the fight continued on in the main event with Tony Rossetti joining in. Rossetti was able to find the extra speed, taking the lead and driving away to the checkered flag. Hayner ended up second, with Persing in third.

It was a duel in the Nash Motorsportz X30 Junior division between Jonathan Portz and SKUSA national #2 plateholder Jak Crawford. Portz was coming off a victory at the Can-Am Karting Challenge while the Texan Crawford made his first series start of 2018. Crawford took the first notch, posting fast lap of qualifying by 47 thousandths over championship contender Alan Tang. Portz came from third on the grid in Heat #1 to earn the win, with Crawford second. The order was flipped in the second heat. However, Portz was handed a one-position penalty for blocking to drop him to third, moving Jacob Yesnick onto the front row for the main event. Crawford and Portz hooked up to get away from the field, while Yesnick retired after just six laps. Portz took over the lead from Crawford on lap eight, never looking back to score his first California PKC victory of the season. Crawford was second, with Jace Denmark-Gessel completing the podium in third. Championship leader Cole Morgan was fourth, while Tang rounded out the top-five. 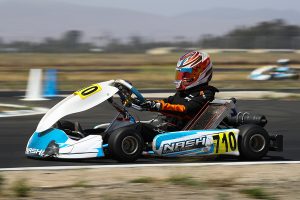 Jonathan Portz won the battle in X30 Junior for his first victory in the series this year (Photo: DromoPhotos.com)

Logan Toke matched the win total of championship leader Kai Sorensen in the Ryan Perry Motorsport Mini Swift division, picking up his second victory of the season. Enzo Deligny and SKUSA Pro Tour champion Carson Morgan were the front runners early on. Deligny set fast time in qualifying, while Morgan won both heat races. Toke bounced back from a DNF in Heat #1 to end up third in Heat #2, posting fast laps of the race. He, along with Morgan and Sorensen, fought for the lead lap after lap. Securing the lead at the white flag, Toke held on to reach the checkered flag first. Parker DeLong slid up into second late, dropping Sorensen to third. Morgan ended up fourth with Deligny in fifth.

The win streak for Graham Trammell came to a close in the PKS Kart Supplies Micro Swift class thanks to the performance of John Antonino. A sweep of Round Four gave Antonino a perfect score from the event, and his first victory of 2018. Logan Chambers was runner-up, while Trammell watched his win streak end from the third position. Emon Fazlollahi had a sweep of his own in the Ace High Designs S3 Novice Stock Honda division. Fazlollahi was P1 in all on-track session, plus earning fast lap in the main event to earn maximum points on the day while securing his second victory of the season. Point leader Eddie Tafoya was second, with Kyle Loh completing the podium. Nolan Siegel made his debut in the Mike Manning Karting S5 Junior Stock Honda division memorable, scoring the victory. It was a near sweep for Siegel, with a DNF in Heat #2 the only blemish. Two-time winner Cash Baxley took the win with Siegel’s retirement. Siegel bounced back in the Final, charging from the back to reclaim the lead and going on to score the victory by 15 seconds. Logan Meyer was second, with Baxley rounding out the podium. 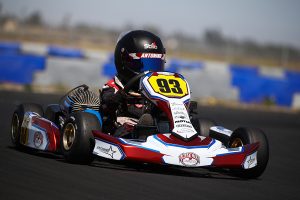 John Antonino swept the Micro Swift for his first victory of 2018 (Photo: DromoPhotos.com)

The 2018 California ProKart Challenge is off until the end of August to allow racers to gear up for the Superkarts! USA Pro Tour SummerNationals at the New Castle Motorsports Park in Indiana. The series returns to action on Labor Day weekend at the Monterey Bay Karters facility in Marina, California on August 31-September 1. For more information on anything related to Superkarts! USA, please visit the website – www.superkartsusa.com – and be sure to follow the Superkarts! USA Facebook page, Twitter and Instagram accounts.