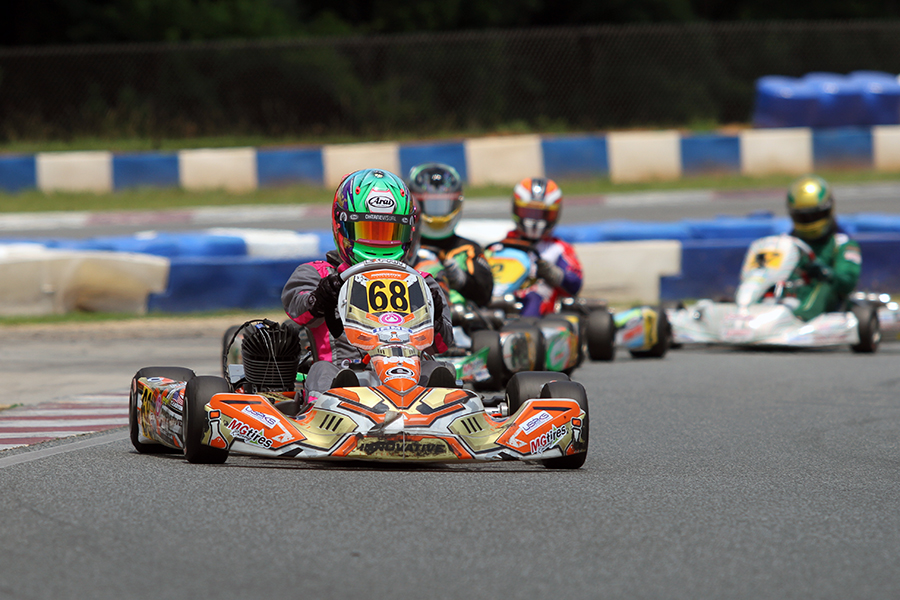 A moment all motorsport enthusiasts will remember is in 1998 when Dale Earnhardt won his first ever Daytona 500. Nearly the entire paddock met him on pit lane on his way to victory lane, giving a high-five to a long line of peers and competitors. Fast forward 20 years later to a hot summer weekend at the GoPro Motorplex for the second stop of the United States Pro Kart Series on June 15-17. It may not have been the similar celebration the Earnhardt received, but you can believe there was the same amount of respect and admiration for the first series victory and repeat win on the weekend for veteran karter and industry member TJ Koyen.

Victory had eluded the Wisconsin native in the four years of competing at the USPKS. Racing in the Leopard Pro division during its first two years, a podium at the opener in 2014 was his best result. After taking the 2015 season to compete regionally at the Route 66 Sprint Series where he claimed the Yamaha Senior championship, Koyen came back in 2016 to the USPKS for the IAME Pro division with a best finish of fourth. The longtime 100cc driver jump at the opportunity of the KA100 class in 2017. He finished the season fourth in the standings with two runner-up and two third-place results. 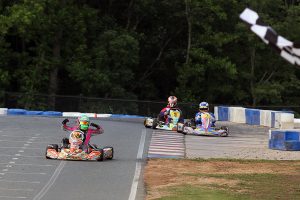 The Carolina Grand Prix at the Mooresville, North Carolina facility welcomed another stacked field in the KA100 Senior category, 21 deep. Koyen was coming off a solid weekend at Ocala and in the hunt for the podium all weekend. Despite missing the opening practice session on Friday due to the American Airline flight cancellations, Koyen was fast off the trailer in his Innovative / Exprit. Koyen positioned himself among the top drivers all day. Qualifying was the only blemish on Koyen’s weekend, starting Saturday off in fourth. The tough outside row two position didn’t phase TJ at all, holding strong with a clean start. He worked his way to the point by lap nine, holding off a charging Mike McAndrews at the line by 76 thousandths. Fighting with McAndrews continued in Heat #2, this time with Senior rookie Emory Lyda joining in. On the final circuit, contact fighting for the lead put Koyen on top of Lyda’s rear bumper. Unable to dislodge, they fell down the order to finish 15th and 16th. Koyen ended up with the seventh starting position for the main event thanks to the combined points of both heat races as McAndrews secured the pole position.

Another clean start for the KA100 field in the main event gave Koyen the opportunity to stay with the lead group early. Up to fourth early, he picked off the next three in just a few laps to take over the lead. Consistent laps and some fighting for second gave him a sizable lead. A couple of good laps closed the gap for Dusty Davis on Koyen, but the veteran responded with his quickest laps of the race to maintain a one-second advantage. After 20 laps, Koyen took the checkered flag to earn his first career main event victory in USPKS competition.

Riding high off the victory, Koyen return Sunday for more. Unfortunately, qualifying was a bit off again, sitting eighth after the session in the tight, competitive field. A large lead pack filled in behind top qualifier Lyda to begin the Prefinal, including Koyen. Near the halfway point, the field shuffled around thanks to contact in turn one, allowing Koyen to slip from sixth to second in just one lap. Running down Lyda a few laps later, Koyen took the lead and the Prefinal win. Koyen remained at the front for the entire 22-lap Final, putting in not the quickest laps of the race, but the most consistent to stay away from the pack. He went unchallenged to score his second victory of the weekend with a 1.3-second margin over Lyda and McAndrews.

Koyen’s double win weekend matched that of April Driver of the Month Zach Hollingshead, as the two are now 1-2 in the championship standings. Hollingshead leads over Koyen by 39 points heading into the series finale, scheduled for New Castle Motorsports Park on July 27-29. 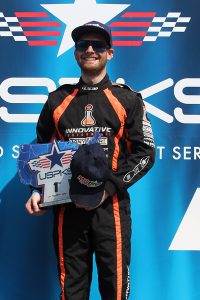 Chassis: Exprit
Engine/Engine Builder: KA100/Innovative Performance
Sponsors: Oktane Visual, KartLift, DeepSeat, Innovative Performance
Series You Compete In: USPKS, SKUSA Pro Tour, Route 66 Sprint Series
Years Karting: 17
How did you get started in karting? My parents were race fans and took me to Badger Raceway when I was 5 to check out the karts. My dad finally convinced my mom to let me try karting when I turned 11.
What has been the high point in your racing career? Probably my WKA Grand National victories in the TaG classes.
What are your goals in racing? Challenge for the win at every event and have fun.
In a few words, how would you describe your driving style? Calm and calculated
Funniest moment at the race track? Way too many… But last weekend Colton Ramsey sneezed while eating an apple and got a chunk of apple lodged in his sinuses, which later came flying out when he coughed during the national anthem. There’s been countless funny moments over the past 17 years.

What do you do when not at the track? Lock myself in the paint shop and only come out to eat or go to the bathroom…
What are your goals outside of karting? Make cool art!
What type of street car do you drive? 1997 slightly rusty, base model Volvo 850 wagon lowered on coilovers. Slow, but practical.
What type of street car would you like to drive? Would love a CTS-V wagon or an AMG-C63 wagon… I love a fast but slightly understated car with a bit of practicality.
What are your pet peeves or things that irritate you? Slow drivers
What do you think could be done to improve the sport of karting? The usual things everyone recommends…class cohesiveness across series, better licensing system, more tracks, more cool one-off events.
What are your favorite aspects about the sport of karting? My entire life is built around the sport. Most of my friends have come from karting and my business came from karting. The sport has given me a ton in life. There’s nothing I love more than getting out and competing against my friends, and then joking around and sharing a drink at the end of the day. More than anything, it’s incredibly fun, challenging, and rewarding.